Season 5 seems to be the least popular season of Chuck. Many viewers dismiss it as boring or ignore it entirely. Many dislike the first three episodes—the Morgansect arc—and find the rest of the episodes uninspired, with the exception of 5.08 Baby, which, like other Sarah-centric episodes, garners almost universal praise. Others hate the final arc because it’s emotionally painful and it seemingly erases Sarah’s character growth.

Now, we may or may not like the season (and that’s fine) but what we cannot say is that the season is useless. On the contrary, season 5 is very much needed to complete all the characters’ journeys. It’s only in season 5, in fact, that the characters become their fully-realized selves.

This is the season that shows that Chuck has become a perfectly competent spy even without the Intersect. The Intersect plays an interesting evolutionary role in Chuck’s life throughout the seasons. In the first two seasons, the Intersect is a burden. In season 3, it’s a tool that turns Chuck into a weapon and a spy. But in season 4 it becomes a crutch and prompts the question, “Is Chuck a spy without the Intersect?” He asks himself and Sarah that question and Sarah lies to comfort him. 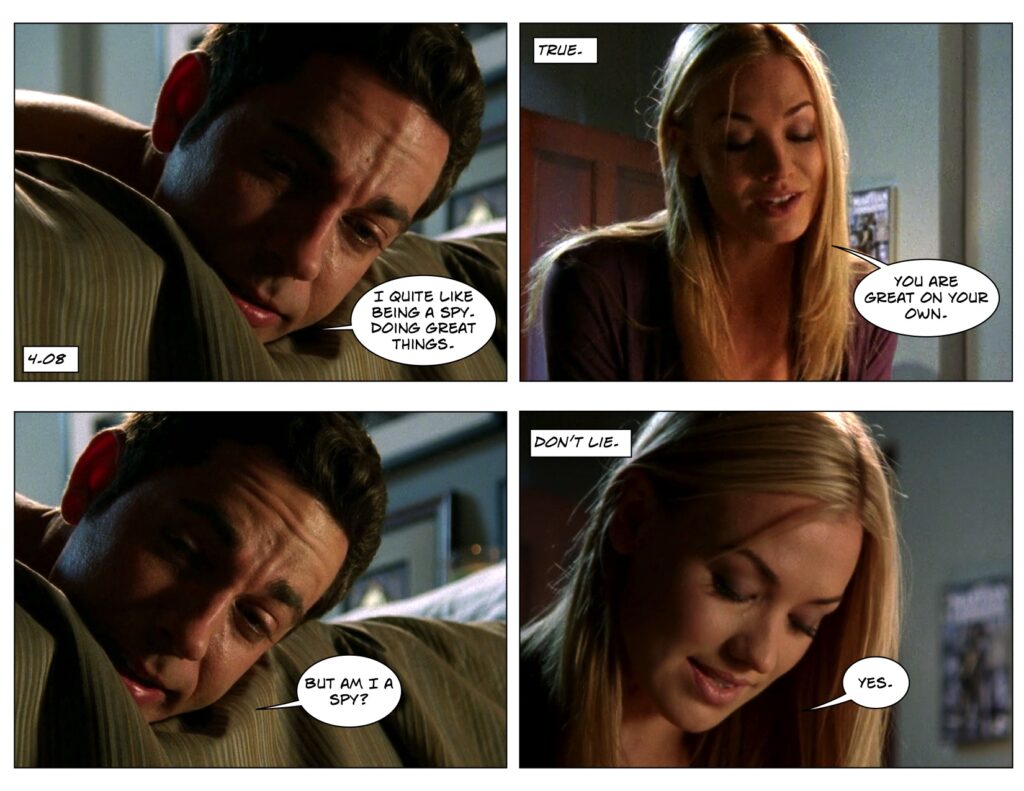 But lies are never a good way to deal with reality. Thus, reality forces Sarah to tell the truth about how she really feels. Remember this scene in 4.08 Fear of Death? 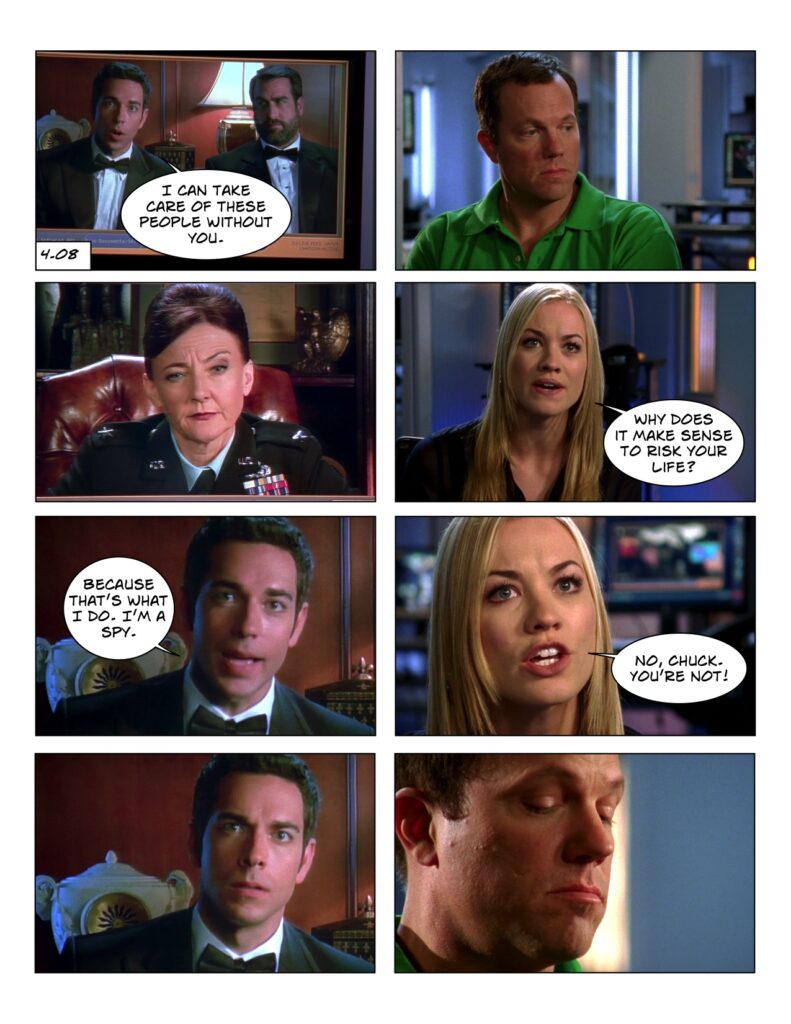 Now, the 4.08-09 arc is also about showing that Sarah loves Chuck regardless of the Intersect and that she will move heaven and earth to save him; once that point is made abundantly clear in 4.09 Phase Three, Chuck can regain the Intersect in 4.10 Leftovers.

But the question of whether Chuck is a spy without the Intersect is not answered in that arc or, if it is, the answer is certainly not a reassuring one. Thus, the theme is reprised In 4.24 Cliffhanger. Remember this scene?

Chuck panics when Decker strips him of the Intersect because Chuck himself thinks he needs it to be a spy and to save Sarah’s life; it takes Casey’s pep talk to push him to do it even without the Intersect. “Shut up,” says Casey, “You’re Chuck Bartowski, the second best spy I’ve ever worked with. Now, you are gonna go and save the best one.” And Chuck goes and uses ultimate vulnerability (no Intersect, all out of plans) to convince Vivian to spare Sarah’s life.

But the question is still not answered. He saves Sarah and marries her (“as you wish”) but now what? Is he a spy or not?

This is where season 5 comes in.

In 5.01 Zoom, he still misses the Intersect and thinks he needs it in order to run his private security firm. But Ellie encourages him to push forward without it and, in doing so, introduces the theme of the season. Incidentally, we should always pay attention to the advice given by Devon and Ellie in the show because they represent the ideal couple and the voice of wisdom in Chuck and Sarah’s lives. 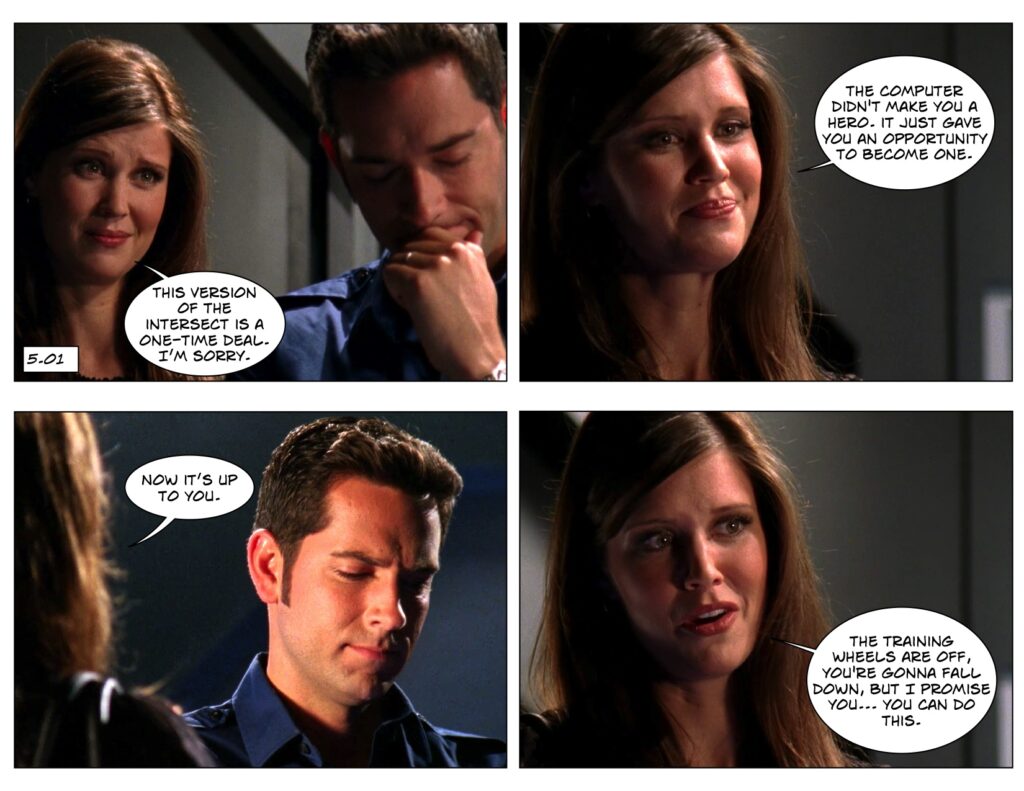 Alright. So, we know Ellie is an awesome sister and we know where we are headed but are we there yet? How do the other members of Chuck’s team feel at this stage about his ability to be a spy without the Intersect?

Not so good, it turns out. This is from the very next scene. Chuck is relegated to doing Morgan’s job and lathering 400 pounds of solid meat. And look who’s back in the van while the team is on a mission. Just like old times. But the team gets captured and Morgansect gets himself knocked out. They are in trouble. Chuck, though, comes up with a plan on the spot and executes with a blend of Piraña and Cole Barker. Look who’s growing up without the Intersect. In 5.03 Frosted Tips, Chuck jumps through fire to save Morgan’s life. In 5.04 Business Trip, Chuck defuses a bomb that could kill Sarah. Talk about being in control of his emotions (lesson learned in season 3). In 5.05 Hack Off, Decker admits Chuck has a unique skillset as a master hacker and a spy who can handle himself in the field. Just like Bryce Larkin. And Sarah shows Gertrude how proud she is of her husband’s skills. But the episode that shows Chuck’s tremendous growth as a spy without the Intersect is 5.07 Santa Suit. In fact, in a way, this episode is the reversal of 4.09 Phase Three. Just as Chuck was mercilessly neutralized and almost lobotomized by the Belgian, Sarah is mercilessly neutralized and almost killed by Shaw. Just as Sarah went all out to save a helpless Chuck, Chuck goes all out to save a helpless Sarah, even though the odds are all against him. Shaw is Intersected. Chuck is not. Shaw has been working on his plan for two years. Chuck has to improvise a plan while his wife is in Shaw’s clutches. Shaw has a lot of experience and was Chuck’s very mentor. Chuck has lost the Intersect. Yet, Chuck outclasses Daniel Shaw on every level (tactical and psychological) and, after stripping him of the Intersect, he also defeats him in a physical fight.

All superspy Sarah can do is thank Chuck for saving her life. We can be sure that, after 5.07 Santa Suit, Sarah will never again say that Chuck is not a spy without the Intersect. By the end of this episode, Chuck has matched or outmatched Bryce, Cole, and Shaw. All while retaining his chuckness so loved by Sarah. He has fully become the man and hero that Sarah saw in him from the very beginning and in whom she had placed her faith. In the end, it was Bryce, Cole, and Shaw who were all partial representations of Chuck, who incorporates and transcends all their best traits and has none of their weaknesses.

And do we even need to talk about this?

In the end, after having shown that he doesn’t need the Intersect anymore, Chuck gets the pristine version of the Intersect because he deserves it. The Intersect is now no longer Chuck’s crutch—it’s his reward.

Sarah’s journey from “nothing but a spy” to a real woman is only complete in season 5. She has become a woman fully in touch with her feelings and even coaches Casey and Gertrude on relationships. Look at her growth on the issue of feelings in the spy life. In season 1, she didn’t even acknowledge feelings. In season 5, she’s so comfortable with them that she effortlessly coaches Gertrude (a representation of season-1 Sarah) on them.

She’s ready to move beyond the spy life and wants kids.

Casey accepts the idea of a relationship with Gertrude, whereas before he was all about separation between duty and love (end of 3.10 Tic Tac). 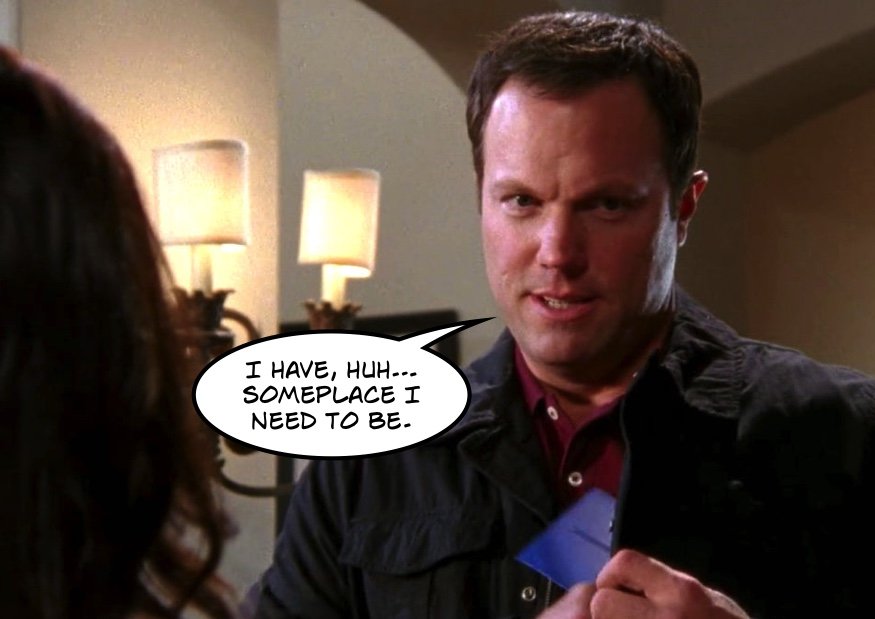 And look who’s learned to give hugs while retaining his man parts. 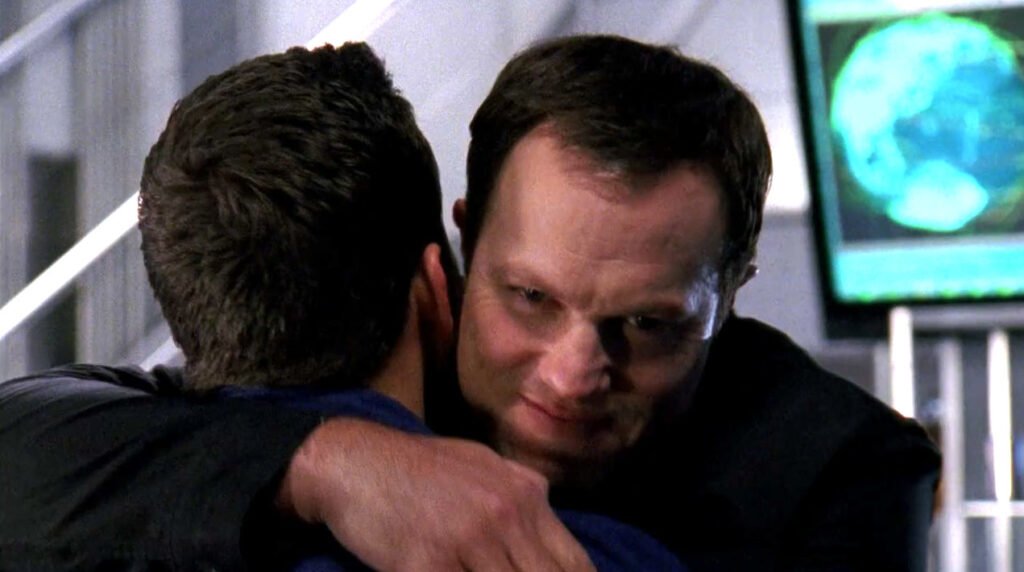 Morgan stands up to his future father-in-law Casey (5.13 Goodbye) with a speech that would make William Wallace proud. He’s no longer a pipsqueak. 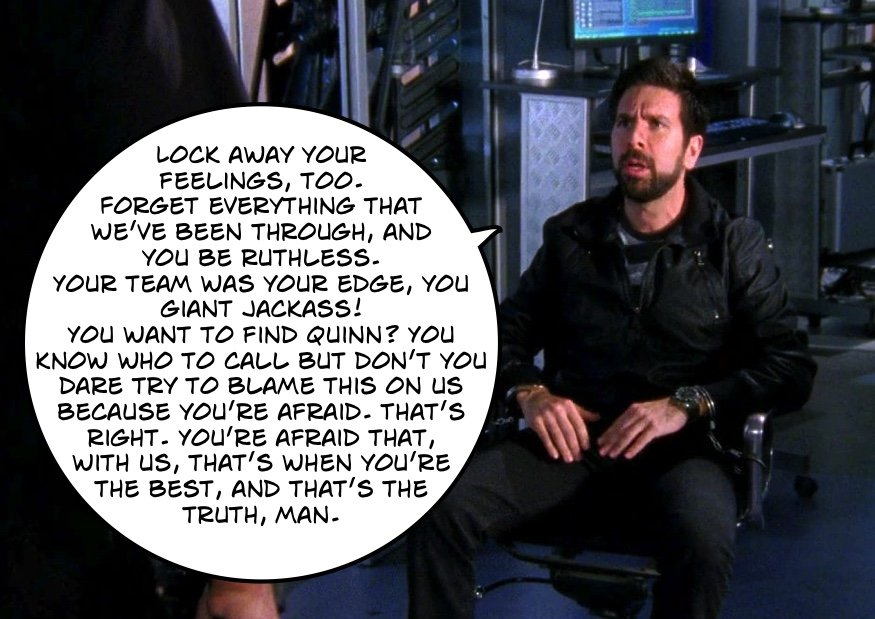 He is eager to move in with Alex, whereas in season 2, he was still mentally a kid and loathed the idea (2.10 DeLorean). 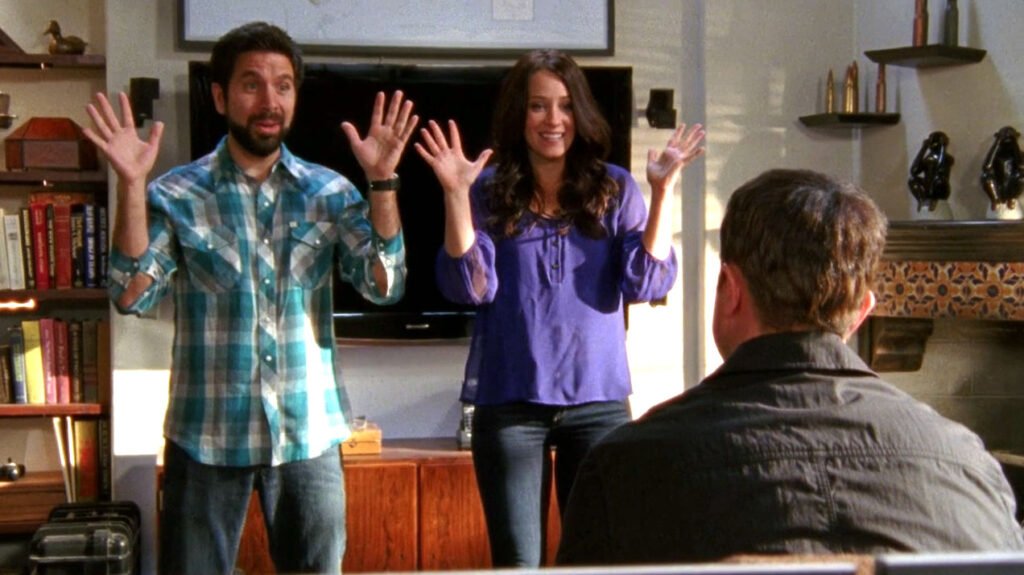 And everyone notices. Even Ellie.

Speaking of Ellie, she is ready to let go of her mommy role and move away from Chuck because Chuck is all grown up. 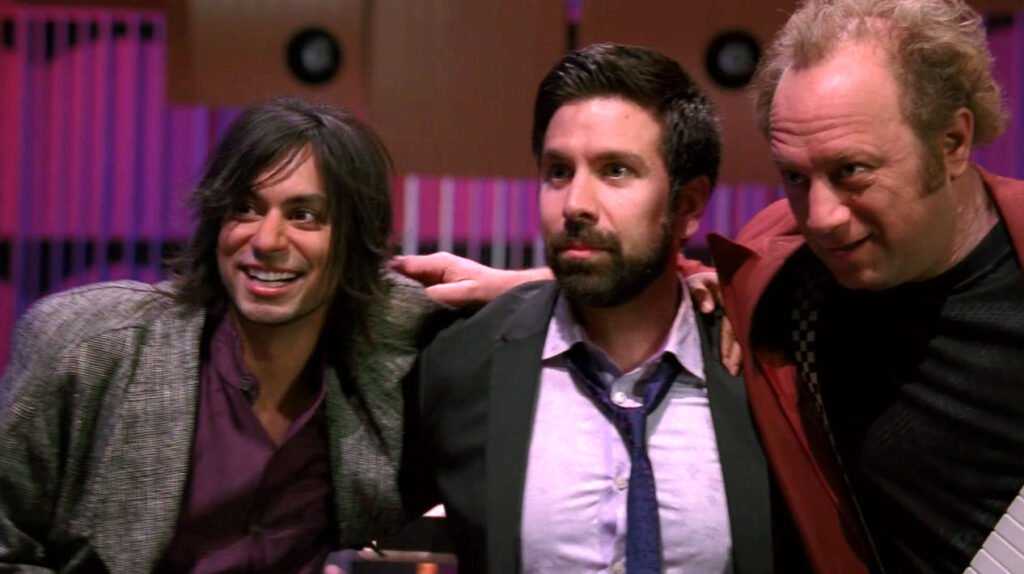 Some viewers dislike the final arc but the arc has a very important point to make. Also, on IMDB.com, the last two episodes are ranked in the top 10 or 12 of the whole show and are fairly interesting. 5.12 Sarah has shocking value because the previous 89 episodes never show a Sarah who’s not in love with Chuck and because it’s very well acted by both Zach and Yvonne. And 5.13 Goodbye is a clever synopsis of the whole show in one episode and, in a finale where everyone’s dream comes true, Chuck and Sarah have their magical Disney princess ending—true love’s kiss. And what more appropriate ending could there possibly be for a heroine whose name means princess?

If you love something, set it free. If it comes back, it’s yours forever.

Season 5 may not be everyone’s cup of tea but is absolutely necessary to complete the characters’ journeys.

I wonder if Chuck played for Sarah Nina Simone(S.3,E.14), if some of her memories would come back. Music can be pretty powerful tool for remembering events in life.

Here's another piece of the puzzle from the arc. Quinn…

Is Shaw a Great Spy?

I think there's more to this. It also shows the…

Just read this again. Excellent analysis with the same optimism…

"The world revolves around the sun, Charles, not you" -Lester…