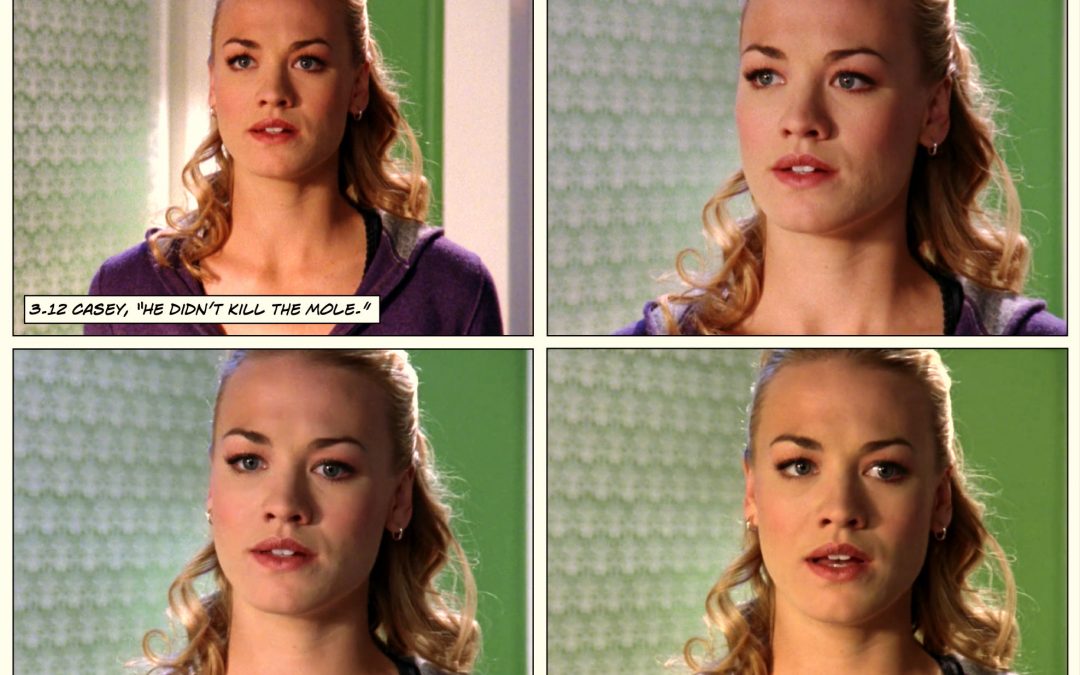 In episode 3.12 Chuck vs the American Hero, Sarah is mad at Chuck for allegedly executing Perry the mole in cold blood in his quest to become a spy for the greater good. Chuck cannot tell her what really happened with Perry at the train tracks because it would implicate Casey as a murderer and would also implicate Sarah, a federal agent. Chuck thus tells Sarah things are not what they seem and asks her to believe him but, engulfed in pain and guilt from her own red test five years earlier, she doesn’t. The next day, Shaw goes on a suicide mission to avenge his wife’s death, which Sarah mistakes for a selfless act; Chuck saves Shaw for Sarah’s sake after locking her in the castle for her safety, declares his love for her, and asks her to run away with him, to which she objects she has commitments (she’s expected to fly to DC and join Shaw there).

As she’s packing in the next scene, Casey drops by and tells her the truth about what happened with the mole, prompting a shocked and wordless reaction by Sarah.

What thoughts, fully formed or not, are going through her head? We can guess the following in no particular order:

Wanted to get your thoughts on what was she thinking with the scene immediately after the building explodes and then when she sees Chuck carrying Shaw. Yvonne’s face goes through many different expressions in a few seconds which is a testament to her great acting skills.

I see shock, anguish, despair, surprise, relief, joy, and gratitude. It all flashes really fast. Some viewers find her reaction underwhelming compared to the one she had in 2.13 (14) Best Friend when she thought Chuck had died in the explosion, where her shock and despair were much more pronounced, but I think she does a great job here as well, and the reaction is different because their situation is different; Chuck is now a man, and she’s no longer his mother hen, so her response is more restrained.