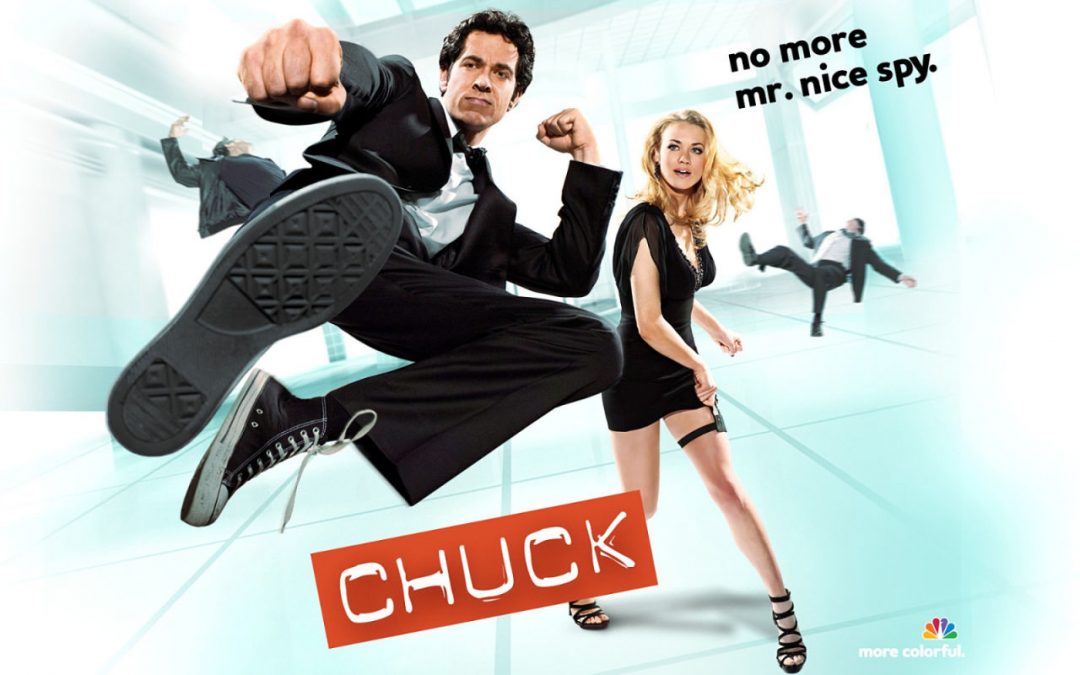 If you love something, set it free. If it comes back, it’s yours. If it doesn’t, it was never meant to be.

Season 3 is there to address all these issues.

What if Chuck and Sarah are no longer forced into a cover relationship and set each other free (3.01-03)? What if Chuck no longer needs Sarah’s protection (3.05-07) but it’s the other way around (3.06-13)? What if they are not only free but also have the opportunity to be with the best possible companion from their respective world, a perfect female Chuck in Hannah and a James Bond-type super spy in Shaw (3.07)?

What if they fall from the idolized pedestal they put each other on (3.08-12)? What if Sarah is no longer a goddess who quells revolutions with a fork in Paraguay but is off her game and needs Chuck’s protection (3.12-13)? Will Chuck still freely choose her, with love uncolored by need? Yes. Yes. Yes, he will (3.12-13) and he’s rewarded with his usual formidable Sarah (3.14 on). What if Chuck is blemished and loses his innocence and, by executing the mole, falls from the soteriological pedestal Sarah put him on but asks her to show up and be with him? Will she still freely choose a fallen Chuck then? Will she accept him as he is and love the real Chuck rather than her ideal of Chuck? Will she take a chance on something with him, based on faith? Yes. Yes. Yes, she will (3.12 BC) and her faith is rewarded with Casey’s revelation of the resurrection of her savior, a Chuck who’s not only not fallen but is indeed supremely selfless and loving (3.12 AC).

But Chuck doesn’t know that since Sarah doesn’t show up at Union Station to meet him and leaves with Shaw instead. So, what if both Chuck and James Bond make the ultimate selfless gesture for her—Chuck by saving Shaw, Shaw by apparently forgiving her for killing Eve? Will she still freely choose Chuck then? Yes. Yes. Yes. Yes, she will (3.13).

In a reversal from the end of season 2, when Chuck and Sarah were unequally yoked and Chuck saw Sarah as a goddess who could do anything while he saw himself as her boy-toy, Chuck and Sarah have now walked in each other’s shoes and are now equally yoked. Chuck is Sarah’s romantic and spy equal and she sees him as her new type and the best of both worlds, while Chuck sees her as a real woman who also lives on planet Earth and needs his protection and love just as much as he needs hers. In order for Chuck to be with Sarah, he needed to really believe he could be a hero worthy of her, not just believe it with his heart but also with his brain.1Chuck’s real nemesis was his own insecurity, which like a boggart in Harry Potter, took on different shapes and forms, from Bryce to Cole to Shaw to the loss of the Intersect. The whole show is basically Chuck vs Chuck. He needed to feel on par with James Bond. And this is the season when it happens. 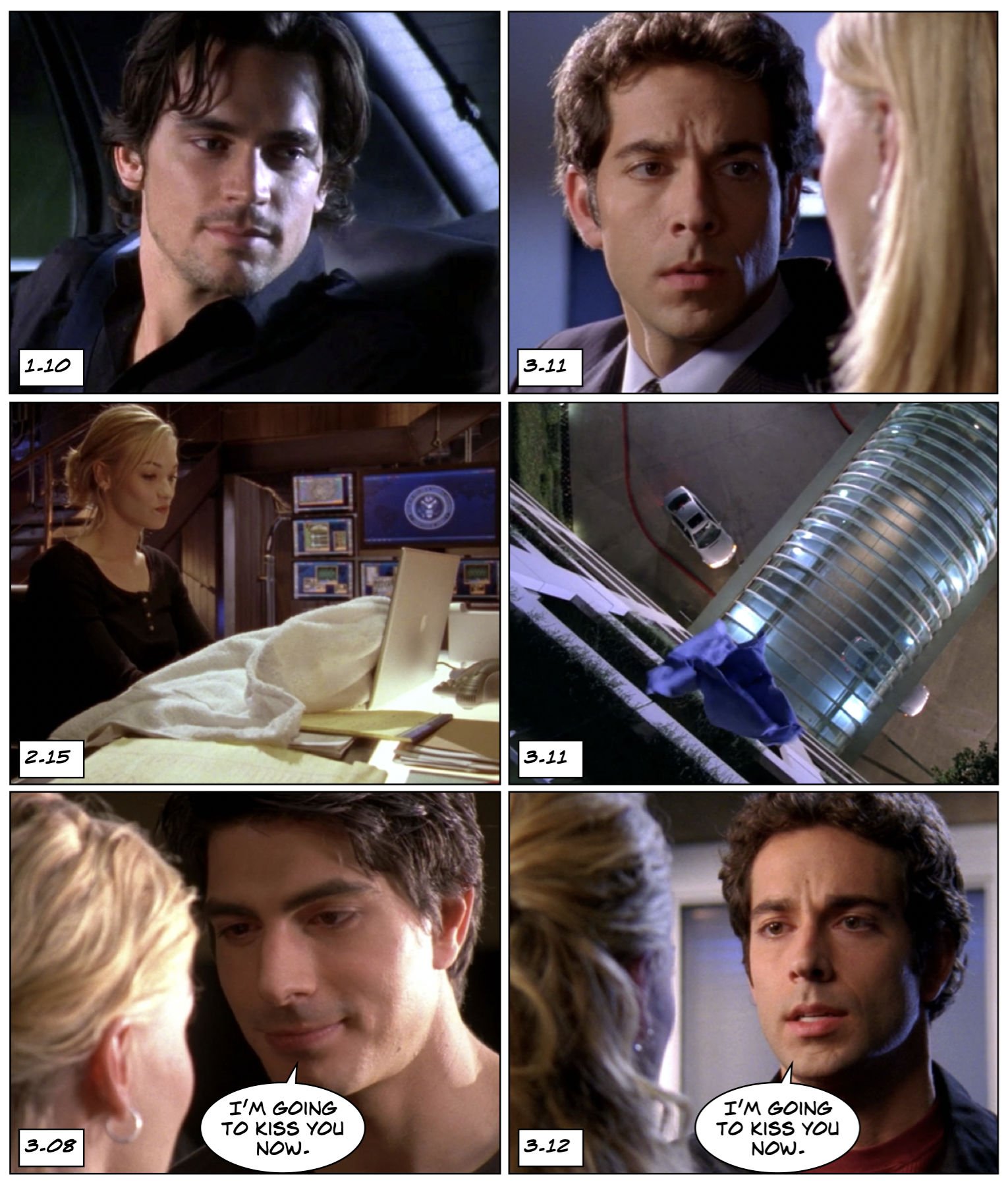 At the end of season 2, he didn’t and asked Sarah for a vacation together. At the end of his hero’s journey in season 3, he does and asks her for a life together.

Season 3 in a nutshell: if you love something, set it free in Prague. It will come back to you in Paris because it was always meant to be.

“if you love something, set it free in Prague. It will come back to you in Paris because it was always meant to be.”

First, season 3 is definitely the most compelling season for me and is maybe favorite season.

Generally, I can also understand why many fans hate it or hated it (at least 3×01-3×12). Had I also had to watch Chuck lose himself and Sarah find herself week after week for months, I would have been disappointed too. On top of that, there are some really awkward storylines:

1) The bumpy transition from season 2 to 3. The hero reasoning is ok, but running away to leave his family and friends forever should be reason as well. The CIA would never have let him go because the Intersect 2.0 was an even bigger weapon than 1.0. This life on the run is not a “real” life either.

2) Why is the CIA suddenly firing Chuck? He still has the knowledge of version 1.0.

3) Sarah and Shaw have no real connection. After Shaw forced Sarah to hand over red test to Chuck, she should have been in conflict with him as well.

4) Casey not wanting Chuck to tell Sarah was just senseless. Sarah commits treason 1 week before to help him, but now she can’t know the truth …. come on

However, the hero’s journey as you described was good and important. The concept of the first two seasons would not have worked anymore.

Maybe I’m too critical, but after season 2 finale I didn’t expect a new will they won’t they arc 😀

Season 3 is my least favorite season (not that I hate it, just my least favorite) for the reasons you mention and more. It’s also because Shaw is a dementor who sucks all the joy from every scene he is in, and because we have seven episodes from 3.05 First Class to 3.12 American Hero ending with Sarah and Shaw. Basically, almost half the season sacrifices the out-of-this-world chemistry between the two leads and makes the heroine hang around a fun-sucking secondary character. We can find reasons as to why this had to happen (and I do), but it’s undeniable that, at the pure enjoyment level, especially for the original viewers who had to watch this unfold over months, it’s a disaster, to the point that even Schwartz and Fedak admitted as much at the following Comic-Con.

I started watching season 3 again and I have to agree with you that the whole plot takes way too long.

I can understand the idea of giving both of them the ideal partner from their old world again. But I think that was really superfluous for Sarah. She already had Bryce, a spy with a heart and the ability to feel emotions. She consciously decided against him and for Chuck. She had the option to choose James Bond (Cole), but she wanted Chuck. The idea that an emotional wreck like Shaw should be the best possible alternative in her world doesn’t close for me. He kills Chuck almost twice (Chuck vs First Class; Chuck vs Beard) you can’t be less Chuck.

Another point is that Chuck wants to be a spy but never wants to use a gun.I think that should have been clear even to him that this doesn’t work. Ok, that an execution (Red Test) is on the cards could be unexpected. Why every spy must carry out such a mission is also questionable. At least Sarah should foresee this mission.

These are just a few examples, but if they had been adjusted, it would have been much less confusing and depressing. Something along the lines of Sarah and Chuck working together at a certain point. All this would not have excluded episode 3×13.

But I think I should stop complaining, it is still the best TV-Show ever.

Yes, we are nit-picking here. As I think I mention somewhere in one of my posts about season 3, I think what we are supposed to see with season 3’s relationships is that Hannah is a perfect Lou 2.0 and a perfect female S1 Chuck, and Shaw is supposed to represent the reality of the spy life, since S3 Sarah is on a journey towards real. Unlike Bryce or Cole, Shaw was married, understands long-term commitment, but he would never be enough for Sarah because he has learned the wrong lesson from the loss of his wife—the lesson that feelings are a mistake. Thus, Hannah and Shaw show Chuck and Sarah that Devon was right in his prophetic warning at the end of 3.03 Angel de la Muerte—if having a double life means giving up half of one’s real life, it’s not worth it. Hannah’s only the normal half of Chuck’s double life, ad Shaw’s only the spy half of Sarah’s double life. Only together can Chuck and Sarah have a full double life (“have it all,” as Chuck puts it at the end of 3.14 Honeymooners): Sarah can give Chuck the spy half that Hannah couldn’t, and Chuck can give Sarah the normal half that Shaw wouldn’t.

You are absolutely right. That was the attempt that should be told, but I find this does not coincide with the story of the two. It was love at first sight and so strong that although everything in the world has spoken against it, there was no chance to escape it. That’s why I don’t really like the idea of the second half.

The hypothesis would be that Hannah could trigger the same emotions and feelings in Chuck that Sarah did. But she never did. It was an asymmetrical relationship and she tried hard. Chuck was never willing to give up anything for her. I would have found the version like Jill (partially knowing) more convincing. That would have enhanced the effect for me in 3×09. The realization of lying to himself. (I’ll leave out the Sarah Shaw accident).

You do a great job analyzing Chuck and sometimes it changed my view. Thanks for the effort.

I think I briefly mention it in my bullet points…

This website uses cookies to improve your experience while you navigate through the website. Out of these, the cookies that are categorized as necessary are stored on your browser as they are essential for the working of basic functionalities of the website. We also use third-party cookies that help us analyze and understand how you use this website. These cookies will be stored in your browser only with your consent. You also have the option to opt-out of these cookies. But opting out of some of these cookies may affect your browsing experience.
Necessary Always Enabled
Necessary cookies are absolutely essential for the website to function properly. This category only includes cookies that ensures basic functionalities and security features of the website. These cookies do not store any personal information.
Non-necessary
Any cookies that may not be particularly necessary for the website to function and is used specifically to collect user personal data via analytics, ads, other embedded contents are termed as non-necessary cookies. It is mandatory to procure user consent prior to running these cookies on your website.
SAVE & ACCEPT
wpDiscuz
6
0
Would love your thoughts, please comment.x
()
x
| Reply
Comment Author Info