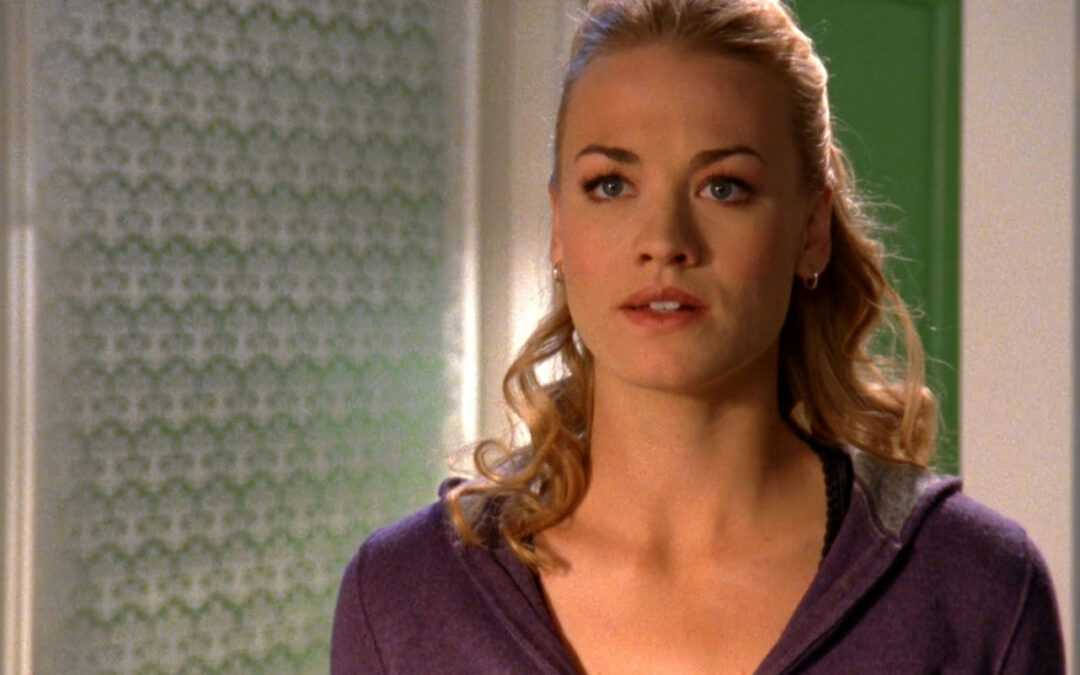 Some viewers think that the only possible interpretation of Sarah’s transformation after Casey’s revelation about the mole is that, before that revelation, she was going to DC; after the revelation, she’s going with Chuck.

But this interpretation clashes with all the contrary evidence that precedes it. During Chuck’s love declaration, the song that plays in the background (the only song in the episode, btw) is Down River, an upbeat song about a couple overcoming the storm and taking a leap of faith together, taking a chance on each other. Now, one of Chuck’s claims to fame is how perfectly the music fits the mood of the scenes. In this case, why would the creators pick such an upbeat song about reconciliation if Sarah’s still going to DC? That would be the worst possible song for this scene. In the packing scene that follows, the camera purposefully frames Chuck and Sarah’s picture on her nightstand before panning to her face. Why would the picture be there and purposefully framed if Sarah’s packing for DC? Chuck just selflessly risked his life to save Shaw for her sake (and she knows it) and then declared his love for her, willing to give up his season-long ambition to be a spy for her sake, finally putting her first, the first man in her life to do so, and she keeps a picture of them on her nightstand while still packing for DC to be with a man who just chose a suicide mission over being with her? That would be a mockery of Chuck’s selfless gesture and love declaration. What kind of woman does that? What’s more, when Casey walks in to tell her something about Chuck, she glances at the bag on her bed and tells him in a relaxed tone that it’s not necessary. If she’s packing for DC, she doesn’t even have the common courtesy to be confrontational about Chuck? Who is this woman and what has she done with Sarah?

But there is another interpretation that perfectly fits all the evidence above and still perfectly explains Sarah’s transformation after Casey’s revelation about the mole.

One thing is for sure. Casey’s revelation does have a huge impact on Sarah.

In this second interpretation, though, it doesn’t change where she’s going, but it’s what redeems her life and her profession, and this redemption is symbolized by her transformation.

This is the equivalent of the story in the gospels when the women go to Christ’s tomb after his death to anoint his body. They think he’s a failed messiah, but they are still loyal to him. They don’t go to DC, so to speak (or Rome, I guess). After the news of his resurrection, however, they are transformed.

This is exactly the same concept with Sarah and Chuck. In fact, 3.11 Final Exam is the first half of the resurrection stage of the Hero’s Journey, when the hero’s moral principles—which he decided to stick to at the end of the ordeal stage in 3.08 Fake Name—are tried in the ultimate test (Chuck’s red test, Christ’s crucifixion), and 3.12 American Hero is the second part of the resurrection stage of the hero’s journey. Just as Christ resurrects and transforms the lives of the women, who go from dejection to joy, Chuck’s “resurrection” in Sarah’s eyes (his innocence of the mole’s death) transforms and redeems Sarah, and this transformation is symbolized by her new looks and clothes.

By failing his red test, Chuck has passed his final exam and has triumphed where Sarah failed with Eve Shaw in the worst day of her life (her words). He’s preserved his innocence in a test where she thinks she lost hers. When she throws her gun on the bed, she’s not just showing she’s going with Chuck (that would be superfluous since everything else in the scene is already showing that); she’s showing she’s been redeemed of her red test, of the worst day of her life. Chuck has redeemed her.

When Sarah finds out from Casey that Chuck didn’t kill the mole, she realizes the innocent Chuck she loved (the thesis) and who she was afraid was going to become a ruthless and morally ambiguous spy like all the others (the antithesis) has managed to become the innocent spy (the synthesis), the third way, the best of both worlds, the one possibility she hadn’t envisioned back in Prague.

He’s her new hero and her new type. And with that, at the end of American Hero, her year-long journey that started in Prague is finally over and she’s all in for Chuck, not half in as she was before Casey’s revelation. By retaining his innocence while becoming a spy, Chuck has finally answered 3.02 Three Words and has made possible what Sarah always thought impossible—spies can fall in love.

I think you are completely right with your analysis.

This is one of many scenes that are poorly explained. Of course the picture is a clue and also the statement about Casey of course. Unfortunately, the scene as you described also allows a contrary statement and would change the whole dynamic. The meaning of an entire episode hangs on a scene that is easily misunderstood. In my opinion, too much is attempted in too little time. This creates a compelling dynamic but it also loses many viewers. If this scene had been given 20 seconds more and, for example, this nonsensical Morse code had been omitted, the message would have been much better conveyed.

Yes, but that’s Fedak. We are not going to get anything more than clues from him. After all, look at how he ended the series. But that’s fine by me in this episode. I see enough clues to feel confident about my conclusion. It’s a spy show. Spies follow clues. The show draws us viewers in by giving us clues and thus making us active participants in the story. I find that clever (and dangerous, since different conclusions may negatively affect our opinion of the characters).

Absolutely, for me it worked in most episodes. This one was a bit weak, but I never misinterpreted this scene. Further, I was never really annoyed by season 3. I think in season 2 the clues worked better, because it’s less subtile or just the lighter tone. However, I have a few other issues with season 2, but I guess I am alone with that

Love your analysis of this episode and the entire series. You confirm so many things that I have thought having watch this series so many times. You, however, point out small details that are easily missed even after watching the series multiple times. This is even with my realizing the small details are there for a purpose and each time you watch it you see something that you may have missed previously. These “minor” details always strengthen my thoughts on each character and Chuck & Sarah. I have never understood the “problems” some people have with some episodes or seasons – ie. the series ending. Clues were everywhere how Chuck and Sarah were going to be together and Sarah’s memories/feelings would return. I can not believe how much is packed in each episode from items strategically placed for meaning, duplicate themes in the spy world and the Buy More world, music choices, even smallest facial expressions, body movements and timing.This show was just geniusly done.