On Packing and Faith 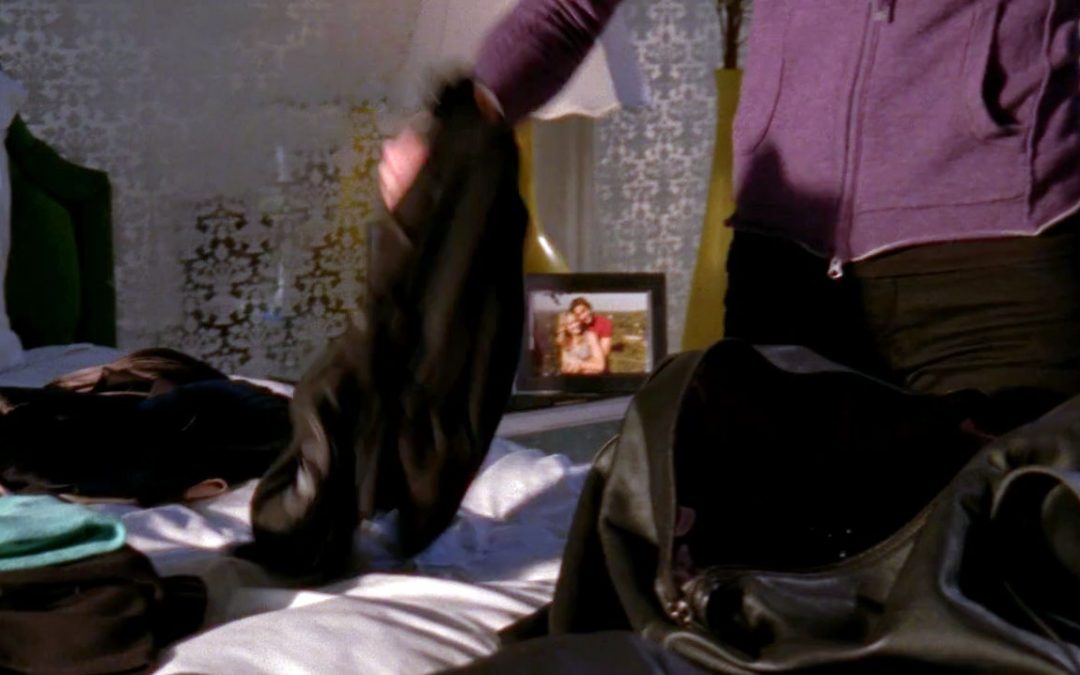 What does Sarah’s packing at the end of 3.12 American Hero have to do with faith? Because her packing speaks of her trust in Chuck despite not having all the facts about his execution of the mole. I believe she is packing to go with Chuck even before Casey’s revelation, and it’s very important that it be so because it’s an act of faith in him on her part.

First, we are given clues in the castle scene during Chuck’s love declaration. Sarah subconsciously nods when Chuck asks her to meet him at Union Station and when Chuck is about to kiss her, the background song comes to the foreground and its lyrics speak for Sarah’s conflicted heart, “Time will tell us nothing. I’ll take a chance on something.”

Then, in the packing scene, the camera purposefully starts by framing the clock and the picture of her and Chuck on her nightstand and then pans up to Sarah’s face. When she then invites Casey in and he says he’s got something to say about Chuck, she says in a relaxed tone while glancing at the bag on her bed that, if he’s there to plead Chuck’s case, it’s not necessary. She thinks that Chuck has sent Casey over to convince her and basically replies this was not necessary because’s she’s already packing to go with Chuck.

Besides these circumstantial clues, it’s very important that she go with Chuck even before Casey’s revelation because, otherwise, she doesn’t love Chuck the person but only the idea of Chuck, the innocence hypostatized in “her” Chuck. But the theme of season 3 is getting Chuck and Sarah ready to be together, and in order to be together, their love has to be real, not based on unrealistic expectations. That’s the reason the season knocks both of them off their pedestal and makes them stumble. Thus, Chuck must and does love Sarah even though she loses a bit of her competence (she’s off her spy game most of the season); conversely, Sarah must and does love Chuck even though he loses a bit of his innocence during his spy journey. If it were not so, their love would not be real.

What’s important to Sarah before Casey’s revelation is that, although Chuck has lost his innocence when he allegedly killed the mole, he’s learned the lesson and told her he’s ready to chuck his ambitions to become a spy in order to be with her and have a real life together away from the spy life and anyone else.

He’s finally putting her first, something no one has ever done for her.

And that’s good enough for her, even though we can tell she’s not ecstatic while packing because she thinks she’s lost “her” Chuck. Her attire and facial expression while packing are the outward representation of her inner misgivings and sadness.

But because of her faith and her “taking a chance on something” with him, she is rewarded with Casey’s revelation that Chuck is innocent of the mole’s death and with the redeeming realization that washes over her face that he’s still “her” Chuck, her ultimate selfless hero who was willing to lose her by saving Shaw for her sake and by keeping his mouth shut about the mole for Casey’s sake.

By retaining his innocence while becoming a spy, Chuck has redeemed and transformed her and has made her anew, which is symbolized by her change of clothes and by the radiant look on her face, the outward representation of her new self.

It was a surprise when Shaw showed up at Sarah’s hotel room because he was in the hospital recovering. If Sarah was not packing to go with Chuck, why would she leave Shaw’s side?