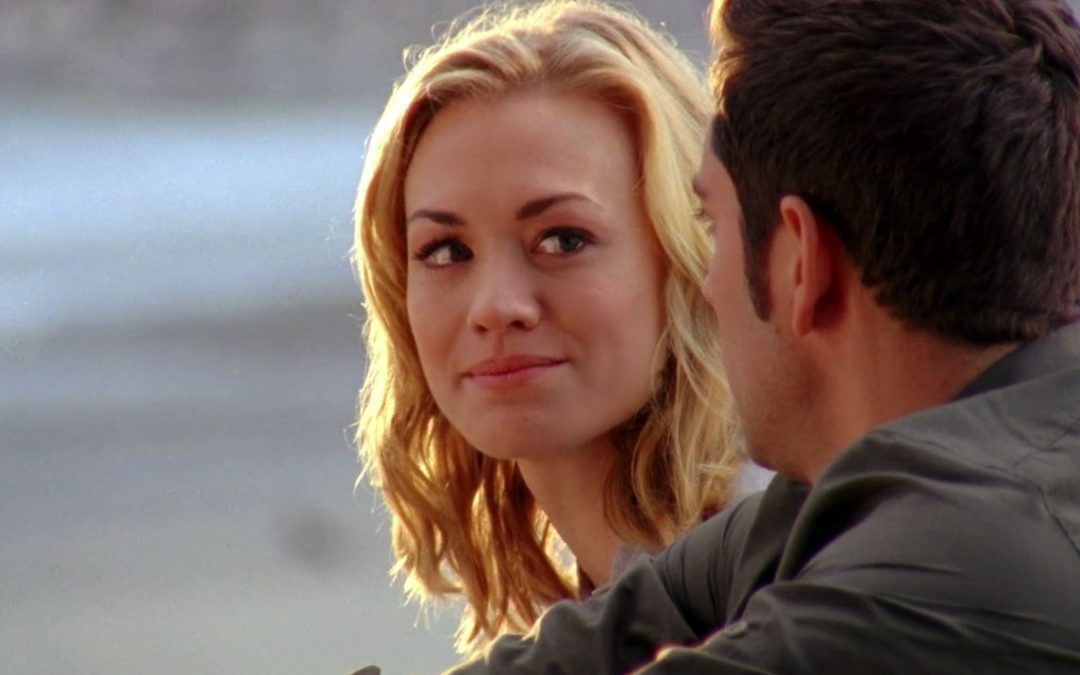 What’s the point of the final arc of the series? Isn’t Sarah’s growth, which represents half of the show, all for naught if she loses her memories and remembers nothing of the past five years?

The memories do come back with the magical kiss—it’s a reversal of the ending of 4.09 Phase Three; the whole show is built on symmetries and counterpoint.

The point of the finale is to show that Chuck and Sarah’s love is so deep that it goes even beyond memories and that, because his love is selfless and self-sacrificial, as shown in his decision to upload the Intersect to help others on the roof of the concert hall, he deserves both the pristine version of the Intersect and the girl.

Quinn and season 5 make a metaphorical bet, kind of like the one between God and Satan at the beginning of the book of Job. Quinn taunts season 5 that Chuck could never get the girl without the Intersect. Season 5 raises the stakes by betting that Chuck could get the girl even without the Intersect, without her memories, and with her old trained-assassin self being given a kill order on him.

Chuck convinces Sarah’s head in 24 hours (5.12 Sarah) and wins back Sarah’s heart in four days (5.13 Goodbye). And with that, they are rewarded with her memories.

He wins her over again and again. And again.

That is the theme of the show.

The point of the final arc was never Quinn or his motives or his plan or Sarah losing her memories for good. Quinn is just a plot device used to temporarily reset Chuck and Sarah’s relationship and then lose his bet.

Sarah represents us viewers. After five years, we might have forgotten Chuck and Sarah’s journey. And so, the final episode is a synopsis of the show for our benefit. It’s Chuck and Sarah’s love story summarized in one episode.

It’s their goodbye to us and their exhortation to remember them.

I agree with you 100% but I think there is a lot more going on in the episode.

Sarah was at a place where she was unable to comprehend being married. Being married to Chuck made no sense; he is a nerd. She told Chuck I don’t know how to be married to you. Sarah could have chosen to get the information she needed from any of her sources. She went to Chuck. Sarah had a mission and sub-mission. The mission was to get the bad guy. The sub-mission was to get to know Chuck.

We need to look at her dreams of a home and family. She thought these things would never be available to her. She lived a hard and fast life half expecting to die on the job. She wanted to know why she married Chuck. How did home and family become an option to her.

The whole episode was a date between Chuck and Sarah. In the end, Sarah fell in love with Chuck twice. The first time it was with a version of Chuck with his potential unrealized. The second time was a version of Chuck she helped create.

Let’s go back to the dance scene. Sarah assumed Chuck did not know how to dance. Underlying that assumption was that Chuck didn’t know how to make love to her. Chuck told her you taught me to dance meaning you taught me how to make love to you. They danced, she flew and ended up breathless. Sarah walked away from that dance with knowing Chuck had what she needed in a lover.

Chuck’s sacrifice to become the intersect again was very meaningful. He put the mission first and save many lives. Of all people, Sarah understands and respects it. During that scene. Chuck became worthy of her love.

I would argue that Sarah fell for Chuck during the entire episode. By the time they were together on the beach, she had a good idea why she married him. That’s why, a long with what you said, she took the leap of faith to share a kiss.

Correct. I’m in the very early stages of writing a post on the final arc, touching on some of these topics. Good job spotting them.

Here’s another piece of the puzzle from the arc. Quinn takes Sarah back to a point in her life that we have to assume is pre-Hungry. In Hungry, she puts Molly before the mission and this gives credibility to Sarah’s more open (but still guarded) nature when she meets Chuck in the pilot. Hungry was a turning point for her. Quinn seems to have taken her back to “an older model”. In both cases, she’s going to be introduced to Chuck. The first time, it’s literally in introduction by Graham. The second time, it’s an introduction by Casey to the real Chuck and not the one Quinn convinced Sarah he was.

Some of the imagery in vs Sarah has elements Hungry loosely sprinkled throughout vs Sarah and whether intentional or not, there are points of symmetry and usually those aren’t incidental when looking at the construction of the series “Chuck”.

Sarah’s Brycelike infiltration to the Intersect room was just like the pilot. It was also similar to the superhuman feat Sarah pulled her first time in Hungry. She just cuts through like butter.

Then we get the cafe confrontation just like Hungry. Sarah is confronting Chuck using Ellie. Sarah contronted Ryker(sp) using Molly.

Also, in both cases, Sarah has difficulty adjusting to the situation. In Hungry, she has a baby she has no idea how to deal with and calls her mother. In Burbank, she doesn’t know how to deal with what she’s experiencing and she seeks Chuck even though she isn’t ready to trust him. In both cases, she’s a fish out of water. First she’s a loner who is now responsible for a baby who has created an upheaval in her life. Then she’s a loner who finds out her life is vastly different than what her experiences are and this has created a new upheaval in her life.

In both cases, she’s in major crisis and at the apex of that crisis. From that point forward, in both cases, she begins to resolve these new experiences to become more than what she is.

I can’t help to think that the way it ended was more about $ than anything else. They wanted to create an ending that made people wonder, did she get her memories back? Do they end up together or not? And this would lead to a future movie or series $. It somewhat worked because it has the fan base split and people are still talking (and they wouldn’t if they had actually shown her getting her memories back) about it but 9 years later no movie.
I understand your point about symmetry and stuff, but if phase 3 was the last episode of the series and if the last scene was Chuck’s confused look, that is all we would be talking about with that episode (not her rampage).
I love the series, but I am with the camp that didn’t like the end at all and they could have easily shown them happy in the end leave it up to us to decide whether she got her memories back or not. Other than asking for the kiss and a few other things saw in him, she didn’t look like a women who fell in love with him again. And Morgan never got his memories back. Based on what I saw, and if it were real, they would be in for a long road and there would be just as good a chance that it wouldn’t work out as it would.
Finally, thanks so much for your incite, especially the early season 3 arc.

Morgan did get a lot of memories back. In fact, the Morgan of the last episode was the best of Morgan. He remembered it was Chuck who told him to follow his heart because our heads only screw us up. He read Casey the Riots Act when Casey had him chained to a chair, and Morgan could not have done that if he didn’t remember anything about the past. He didn’t remember everything but he remembered all the important stuff. And he didn’t get a magical kiss.

And Fedak did say in post-series interviews that the memories do come back. And they have to (he admitted) because, otherwise, the journey will have been for naught if the memories are gone. He said the memories are there and are resurfacing. He basically gave the viewers two options, based on our preference. We can either believe all the memories come back with the magical kiss. Or we can believe that they come back over the following few weeks, as Sarah falls back in love with Chuck all over again.

This website uses cookies to improve your experience while you navigate through the website. Out of these, the cookies that are categorized as necessary are stored on your browser as they are essential for the working of basic functionalities of the website. We also use third-party cookies that help us analyze and understand how you use this website. These cookies will be stored in your browser only with your consent. You also have the option to opt-out of these cookies. But opting out of some of these cookies may affect your browsing experience.
Necessary Always Enabled
Necessary cookies are absolutely essential for the website to function properly. This category only includes cookies that ensures basic functionalities and security features of the website. These cookies do not store any personal information.
Non-necessary
Any cookies that may not be particularly necessary for the website to function and is used specifically to collect user personal data via analytics, ads, other embedded contents are termed as non-necessary cookies. It is mandatory to procure user consent prior to running these cookies on your website.
SAVE & ACCEPT
wpDiscuz
5
0
Would love your thoughts, please comment.x
()
x
| Reply
Comment Author Info