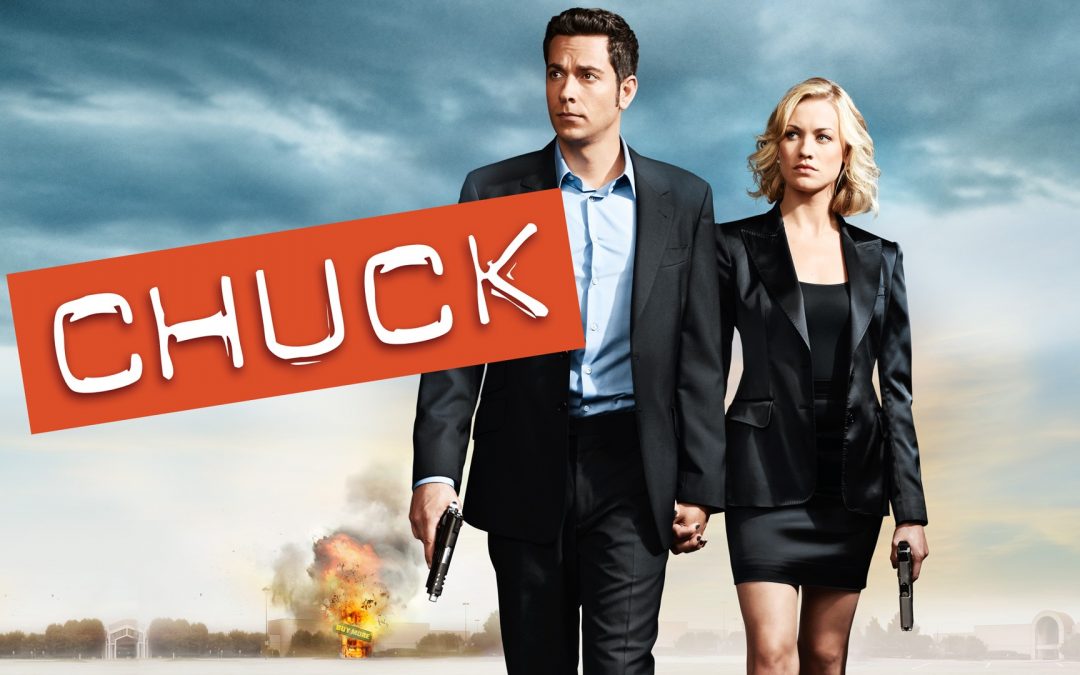 Spy love is. How do you truly love in a world that thrives on lies and deception and where true feelings are a liability? How do you even know it’s true love? Chuck and Sarah fall in love with each other from the very beginning but their relationship is complicated. It has lots of layers that might cloud their true feelings and that need to be peeled off to expose the kernel of their relationship.

First, the self-realization layer. At first, Sarah doesn’t even admit to herself or to Chuck that she loves him (1.08 Truth, “I’m sorry, Chuck. No.”) and it takes the threat of pending death for her to show her true feelings (the kiss at the end of 1.09 Hard Salami), followed by a few more days to make peace with them (end of 1.11 Crown Vic).

Then we have the feasibility layer. At the beginning of season 2, about a year after they first met, Chuck and Sarah are not hiding their feelings now that it seems that Chuck is about to be replaced by the new Intersect. But it’s not that simple. In 2.01 First Date, both Chuck and Sarah think she’s going to leave once her Intersect mission is over.

As 2.03 Break-Up shows, feelings are a dangerous liability in the spy world (Sarah’s feelings for Chuck compromise her performance as a spy). So, Chuck has to hit the breaks on their relationship and pull back for Sarah’s sake.

Then we have the emotional intimacy layer. The ostensible (but still true) reason that Chuck gives for the break-up is that he’ll never be able to know the true Sarah because he knows nothing about her past. This is resolved relatively quickly when Chuck realizes by the end of 2.04 Cougars that he doesn’t need to know the details of Sarah’s past to know the real Sarah.

Then we have the real-world layer. At the end of 2.11, Chuck is shocked that his sweet Sarah would kill an unarmed man in cold blood and then lie to him about it. In her quest to protect Chuck’s innocence, Sarah’s hidden the hard truths of the real world from Chuck and he must learn through experience (2.14 Best Friend) that sometimes we need to make hard choices for the ones we love, as he has to execute Morgan’s dignity in cold blood in order to save his life.

Then we have the inadequacy 1.0 layer. In 2.15-16, Chuck feels he’s not man enough to keep his girl from James Bond (Cole). Ouch. This will only be resolved in 3.12 American Hero, when Chuck feels adequate enough to save James Bond’s (Shaw’s) life and then take the girl from him.

Then comes the season that puts Chuck and Sarah together. But there are still more layers that need to be peeled off. Love is like an onion.

Remember when Chuck tells Lou in 1.09 she’s everything he’s looking for but he just can’t look?

Remember when Sarah tells Cole in 2.16 she’s not the kind of girl who cheats on her cover boyfriend?

Well, what if Chuck can look and Sarah doesn’t have a cover boyfriend? Would they still freely choose each other?

That’s where season 3 comes in.

In the first two seasons, Chuck and Sarah are attracted to each other but is this love or co-dependency? How much of that attraction is real and how much is clouded by the spurious layers below?

Season 3 systematically peels off all these layers.

Once all these layers are removed and the kernel of their relationship is exposed, season 3 asks, “do our heroes still really love each other rather than their idea of the other? Is this real love?”

But it’s not over yet. “Will they or won’t they” is only half the journey.

If you’ve ever been in a relationship, you know the other half is “how will they?”

Well, they first start by peeling off the commitment 1.0 layer. Sarah doesn’t want to move in because, ostensibly, she and Chuck are not a normal couple but, really, because she grew up without roots and is afraid of commitments. It will take a tiger to change her mind.

Then we have the mental health layer. Will Sarah love Chuck in sickness and in health? Will she love him if the Intersect is damaging his brain (3.16-18)? Yes, she will.

Then we have the mutual relationship insecurity layer. Chuck and Sarah are together but Sarah is not unpacking (4.02 Suitcase) and Chuck’s eyeing the Hulk’s dream girl a bit too much for Sarah’s taste.

Then we have the commitment 2.0 layer (4.03-04). Marriage? Kids? Wow, Chuck’s moving way too fast for Sarah here. But apparently not. A Costa Gravan revolution shows Sarah that, yes, life is a river of change but love is the constant being. Heraclitus and Parmenides.

Then we have the inadequacy 2.0 layer. Is Chuck a spy without the Intersect? Does Sarah love Chuck only when he has/is the Intersect because that’s what makes him ontologically worthy of her plane of existence? Does she love Chuck because of the Intersect? That’s Chuck’s fear but the giant blonde she-male squashes that fear in 4.09 Phase Three.

Then we have the external threat layer. Volkoff knows everything about Chuck and Sarah and their family (4.10 Leftovers) and our heroes are not safe until Volkoff is no longer a threat. So, they make him a threat no longer (4.13 Push Mix).

Then we have the meddling layer (4.15 Cat Squad). Sarah’s got no family or friends to invite to the wedding? Chuck invites Charlie’s Angels. A bit rocky but Sarah appreciates the thought in the end. Chuck had his heart in the right place.

Then there’s the priority layer. A few days before the wedding, will Chuck stick with Sarah against his mom or with his mom against Sarah? Mom or wife? Uhm. Past or future? Casey helps Chuck see things in perspective.

Then there’s the vulnerability layer. The only way for Chuck to save Sarah’s life is to put his life in his enemy’s hands, willing to die to save his beloved. There’s no greater love than that, right?

Well, actually, there is. What about being willing to die to save your enemy (5.12 Chuck vs Sarah)? Chuck does that, too.

But such is true spy love.

And you thought your love life was complicated.