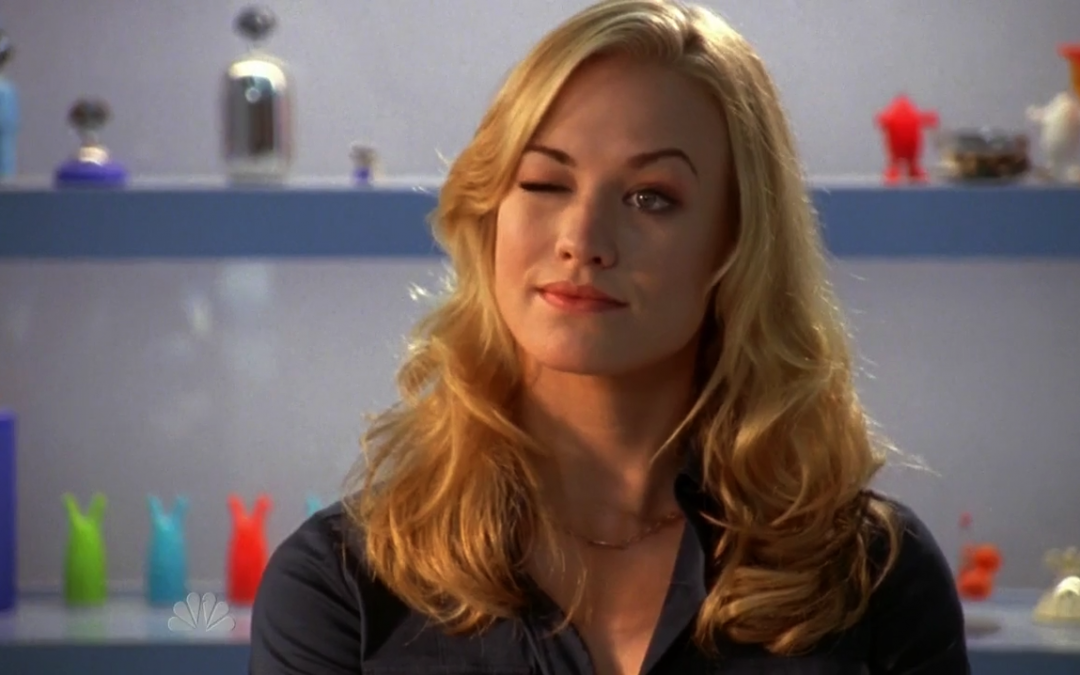 Many viewers are upset that Sarah shares her real name with Shaw in 3.08 Fake Name. Some viewers hate this so much that they latch onto Fedak’s later comment that they shot a scene during season 5 in which Sarah reveals that Sam is not her real name but her dog’s name. According to Fedak, he almost put that scene in season 5 but was convinced by one of the writers not to do so.

As much as I hate the fact that Sarah shares her real name with Shaw, I’m glad they didn’t make the same mistake they made with the appalling interrogation scene in 3.17 Living Dead by inserting a scene that would have damaged Sarah’s character.

If, in fact, Sarah doesn’t share her real name but only a fake name with Shaw, that means that she starts a relationship with him based on a lie for absolutely no good reason, which turns her into a hypocrite—a liar rather than a woman on a journey of growth towards a real life that parallels and contrasts Chuck’s journey towards the spy life (two parallel journeys that start in Prague and meet in Paris).

This voids the theme of the season, which is Chuck’s and Sarah’s parallel journeys—Sarah growing into a real woman while Chuck grows into a real spy.

In the context of 3.08 Fake Name, where Sarah is absolutely freaking out about Chuck living the lie and losing his real self in the spy life while she’s desperately trying to find her real self, giving Shaw a fake name is itself a lie that turns into a hypocrite and a whore. I hate that she gives her name to Shaw but the alternative is not only far worse but also makes no sense in the context of the story.

By rejecting Sam as Sarah’s real name, we sacrifice the integrity of Sarah’s character in order to save the intimacy of her name.

It’s far better to sacrifice the name in order to save her character. And besides, it’s done in a way that also allows Chuck to know it. In other words, Sarah is not revealing her real name to Shaw because Shaw is special. She is revealing her name because she feels the need to open up and share something real about herself, and Shaw just happens to be the person who is willing to listen to her. More importantly, however, Chuck is also listening to her, and he is really listening because her words are what saves him, what prompts him to break up with Hannah, stop trying be be a spy like all others, and start on his journey towards redemption.

But it is not the name that sets Chuck’s redemption in motion. It’s Sarah’s anguish behind her need to reveal that name. It’s Sarah’s yearning for real. Chuck stopped caring about her real name at the end of 2.04 Cougars and, in fact, re-christens her Sarah Walker in his love declaration in 3.12 American Hero. And this is very fitting because Sarah’s whole journey towards a real life started when she first met Chuck as Sarah Walker. Sarah is not her birth name but is and becomes her real name, the one Chuck calls her by, the one all the people who love her call her by, the one she proudly gives Heather Chandler in 4.03 Cubic Z, the one on her marriage license. That’s why, when Shaw says that she doesn’t look like a Sarah to him, it’s an indication that he does’t really understand Sarah—she is Sarah, but Sarah is only real in connection witch Chuck because he is her anchor to reality, her home.

But her birth name has relevance in 3.18 Subway, when Shaw uses it to goad Sarah into taking his gun. He taunts her that Chuck didn’t share true details about himself in a more intimate setting, as Sam had done with him in his hotel room in 3.08 Fake Name. If the name she gave Shaw in that setting were not Sarah’s birth name, she wouldn’t react the way she does here with Shaw.

I believe Sam is her real name. Not an issue for me.

The whole thing with the names and people talking about Sarah, Sam, Jenny, etc. misses an implied point that people point out when Casey calls his mom and says it’s Johnny or when Sarah meets people from her past. I’m sure that as Sarah points out in 2×01, when she leaves Burbank, they will give her a new identity. I’m sure Ryker doesn’t know her as Sarah Walker, Bryce as Bryce, Casey as Casey, etc. Imagine if the TV show tried to keep up with the aliases. Instead, it makes sense to avoid confusion and establish the characters by maintaining a consistent name. It’s been implied throughout the show that they have lots of aliases and when they meet people they knew previously, they need to learn the new alias. It’s a necessary decision for purposes of not introducing unnecessary complexity into the plot.

I’m sure Sam is her real name and I’m sure they reuse aliases but I don’t think she necessarily knew Casey as Casey and Graham gave her the name Sarah Walker. He gave her an alias. Sarah Walker is an alias so it’s just a way to keep it simple.

Shaw got her name but he knows nothing except what he reads in her file. Chuck got let into her family dynamics. Chuck met the source of her development and pain (her father). Telling Shaw her name is Sarah’s way of saying she’s tired of living the lie. Letting Chuck see the world that she came from is the more intimate truth of who Sam is. The name Sam anchors her to the past before her life of cons/spying. Chuck anchors her to the present by connecting that past to who she is and what she lost along the way while she heals herself. Without Chuck, she wants to go back to what was real before all of the pain but the reality is she can’t go back. She can only lament about that time. With Chuck, she can grow by accepting that past is part of who she is and who she becomes. This is something Shaw will never provide. He won’t anchor her to the present and she’s reaching for an anchor so the only anchor she has available to her is who she was before she started this life.

Sam dreamt of a family, kids, a white house with a red door and a picket fence. With Chuck, she starts to remember that Sam. Chuck might not have the name but he has her past, present, and ultimately, her future. He knows Sam. Shaw knows her name, he doesn’t know Sam. Chuck knows Sam and Sarah as pieces of the same puzzle. That’s what makes Sarah’s revelation to Shaw so desperate. She starts to wake up to that Sam and is afraid she’s going to lose Sam again so she tries to save her fading dream, by revealing her name.

Telling Shaw her name is Sarah’s way of saying she’s tired of living the lie.

Yes, and that’s the outward sign that S3 Sarah’s looking for real.

I think that’s the reason Lauren LeFranc yelled at Fedak when he wanted to have Sarah tell Molly in 5.08 Baby that Sam was her stuffed dog’s name. That would have drastically changed the meaning of the name reveal in 3.08 Fake Name (unless Sam was both her name and the stuffed dog’s name, which would be a bit weird).

Viewers are upset at the name reveal in Fake Name and I understand the feeling but it’s part of Sarah’s S3 journey towards real.