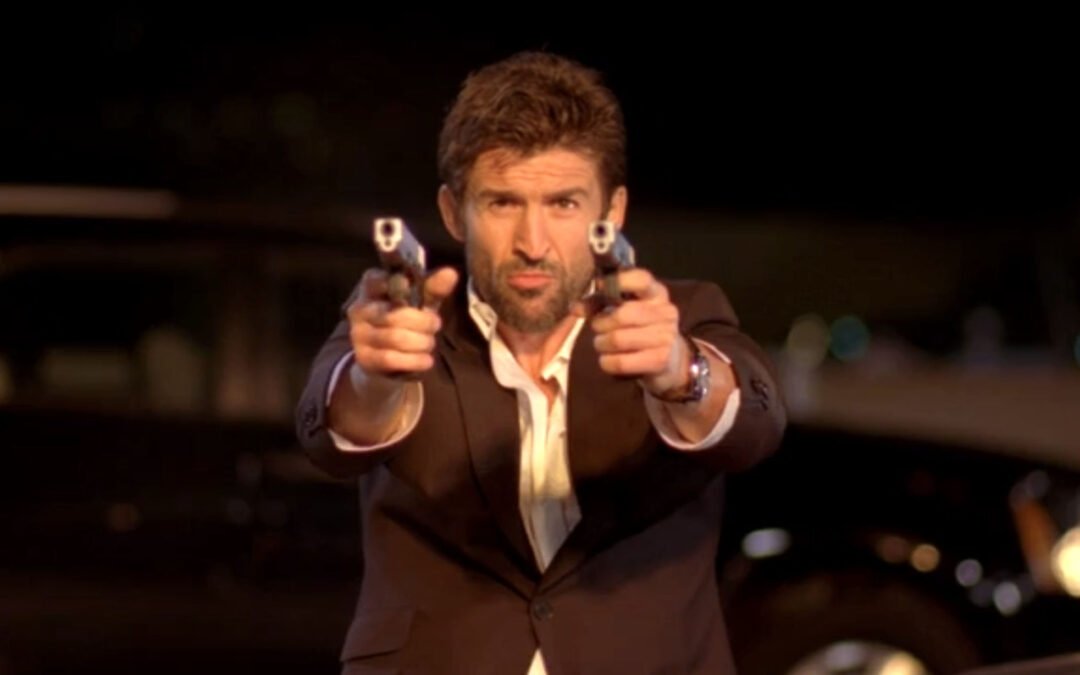 Some viewers think the Cole arc is unnecessary because Chuck and Sarah’s relationship is starting to go around in circles. I disagree. It’s true that Chuck breaks up with Sarah at the beginning of 2.15 Beefcake because he thinks they will never be really together, but this instance is not exactly like the ones before.

During their first break-up at the end of 1.08 Truth, Chuck broke up with with Sarah because he thought her feelings for him were not real, and so he sought a real relationship with Lou. During the second break-up at the end of 2.03 Break-Up, Chuck broke up with Sarah to protect her personally and professionally since her real feelings for him were putting her life in danger.

But in 2.15 Beefcake, Chuck breaks up with Sarah because, even though their mutual feelings are real, he thinks they will never be able to be together, and so he stops trying. He whines about it and quits.

Enter Cole. Like, right away, in the very next scene.

And Cole wants Sarah as his Bond girl.

Oh yes, he’s James Bond who tempts Sarah to take the easy way out of a complicated relationship right after Chuck does by breaking up with her. Cole tempts Sarah to go on a steamy vacation to Fiji with him, no bags (no baggage), no goodbyes, so that she can forget about her worries.

First, he sincerely mentors Chuck and shows him what a man and a spy looks like.

But while Chuck quits like a child when when Sarah keeps shutting him down and things get hard for him (his lacking manhood is symbolized by Sarah chopping up a phallic symbol at the beginning of Beefcake), Cole is a man who acts, who never quits, never stops pursuing Sarah, no matter how many times she shuts him down (symbolized by his dropping his towel by Sarah and impressing even Casey with his manhood), and when the fake approach fails (“do these lines usually work?”), he switches to the real one (“ok, change of tactic”), which works better with Sarah precisely because she likes real.

Cole takes a bullet for Sarah more than once, endures torture to protect Chuck’s Intersect identity on Sarah’s silent and grateful pleas, and leads Casey to taunt Chuck that Cole’s methods are working.

Chuck learns this lesson and does a 180 at the end of 2.16 Lethal Weapon. Whereas at the beginning of 2.15 Beefcake, he quit and chose the easy way out of a complicated relationship when things got tough, here he decides to act and take control of his destiny; he decides to stick with the girl he loves, just as Sarah decided to stick with him even when things got tough under Cole’s relentless pursuit. She’s a woman who acts. She wants a man who acts. Cole inspires Chuck to be that man.

That’s the reason Barker brings Bartowski and Walker together. He teaches Chuck to man up and never say never. 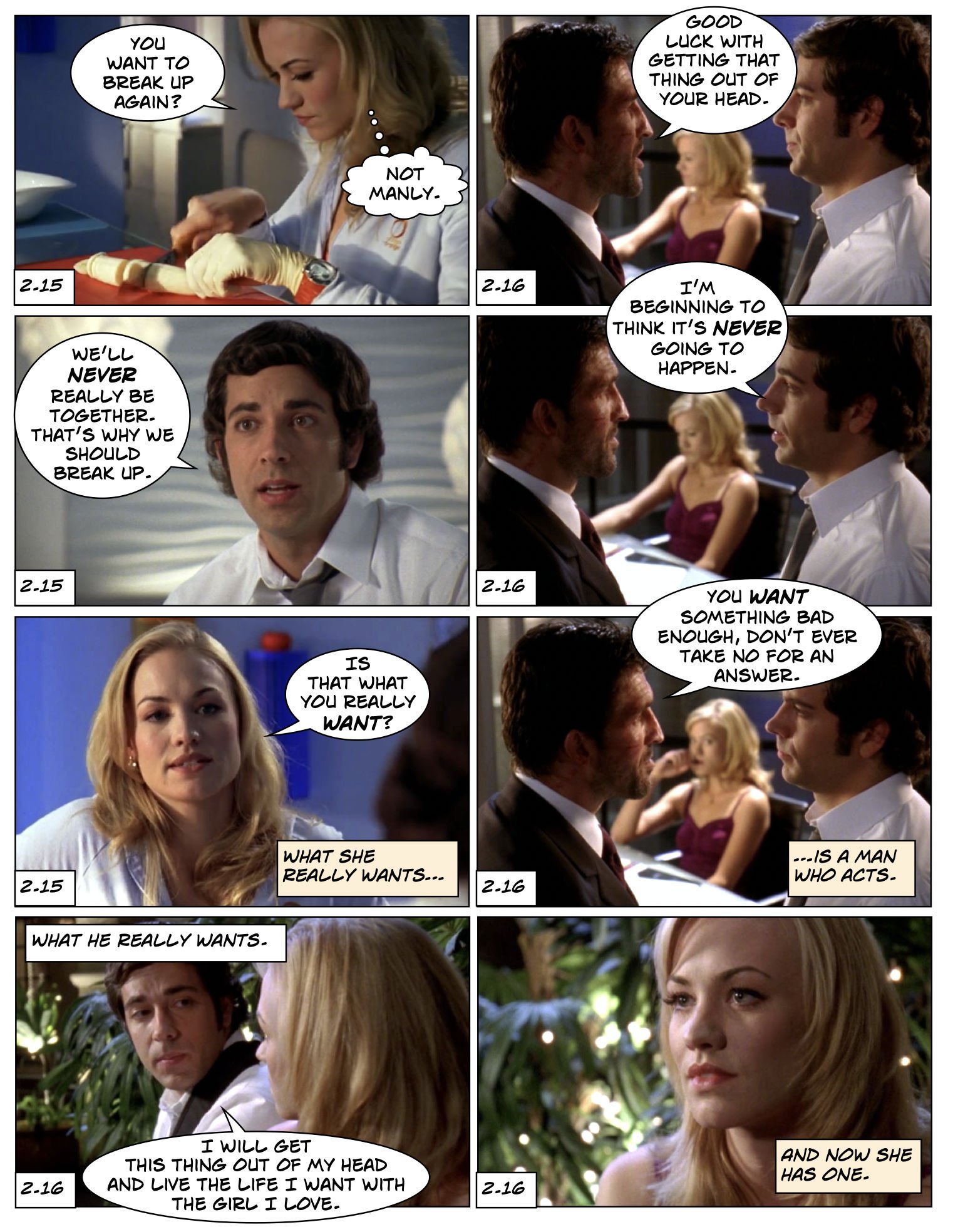 By the end of season 3, Chuck will be James Bond and more—he will save the day and James Bond (Shaw) and win the girl from him, and even have a very James Bond-like scene in Paris with his Bond girl at the end of 3.13 Other Guy. And by the end of season 5, Chuck will be Cole and more, even without the Intersect—he will jump off buildings and walk through fire to save the day, withstand torture with aplomb, take a bullet for Sarah, and relentlessly pursue her no matter how many times she shuts him down, until she is his.

Thank you for the article! Even in 2022 this show lives on.

I though Sarah was into Cole more than chuck.
When do you think she decide to stay with Chuck?

The whole time. I think the purpose of the Cole arc is twofold: for Chuck, it’s to make him man up through Cole’s example and to let him see that things are difficult for Sarah, too, not just for him. for Sarah, it’s to confirm that her love for Chuck is “as good as it gets.” This is reinforced through the B story in 2.16 with Morgan and Anna, which informs the A story: Just as Anna loves Morgan despite his ridiculous quirks (her words), Sarah loves Chuck despite his ridiculous quirks—she chooses Chuck at his childish worst over Cole at his manly best because her love for Chuck is “as good as it gets,” despite being tempted by the sexiest man in the world. This is her final answer to Morgan’s line at the end of Best Friend.

what about the way Sarah kissed Cole and the way she looked at him?

I think I briefly mention it in my bullet points in the original post above, and I will need to expand on it once I write my review of 2.15 Beefcake and 2.16 Lethal Weapon, but I think the point of the Cole arc is to show that Cole is a manly representation of Chuck. He’s a mark that turns out to be a good guy, that she rejects on the surface but likes under the surface. But unlike Chuck, who childishly quits when things get tough, Cole never quits in his pursuit of Sarah and teaches Chuck to never take no for an answer.

Cole is supposed to be the sexiest man in the world, Sarah’s type, and she’s attracted to him but she resists the temptation. The kiss is initiated by Cole and Chuck is made to witness it (just as he witnesses other stuff with Cole and Sarah) because the purpose of 2.15 Beefcake is to metaphorically roast Chuck alive for his cowardly giving up on the relationship at the beginning of Beefcake (the writers symbolize this by having Sarah chop up a banana, a phallic symbol). Chuck nows sees that (a) things are tough for Sarah, too, not just for him and (b) that he’s a child compared to Cole. This is made obvious in the scene right after he witnesses Cole kiss Sarah. He walks into the Buy More and meets Morgan, who says he’s a basically a child with the same Tron poster in his bedroom since he was 12. This is obviously the B story informing the A story because we can see that Morgan’s words really hit Chuck hard, who just witnessed his girl being pursued by a real man, and he tells Morgan to move in together (to man up).

This is reinforced at the end of the next episode, when Cole tells Chuck to never take no for an answer on something he wants. Watch the screenshot in the post above. When Cole tells that to Chuck, he’s ostensibly referring to Chuck wanting to remove the Intersect, but what he’s really talking about is wanting the woman that is purposefully framed between the two men. You see the visual symbolism there?

So why is Sarah attracted to Cole and why does she kiss him when he grabs her? Because she has a type and Cole fits that type to a T. She likes men who act (her words). So, she is tempted, Cole is the last temptation of Sarah and the manly version of Chuck, but she decides to stick with Chuck in both Cole episodes because her cover relationship with Chuck is real to her. That’s why she tells Chuck at the end of Beefcake that she’s really going to miss it. And at the end of Lethal Weapon, Cole himself understands that her love for Chuck is not just a cover.

This website uses cookies to improve your experience while you navigate through the website. Out of these, the cookies that are categorized as necessary are stored on your browser as they are essential for the working of basic functionalities of the website. We also use third-party cookies that help us analyze and understand how you use this website. These cookies will be stored in your browser only with your consent. You also have the option to opt-out of these cookies. But opting out of some of these cookies may affect your browsing experience.
Necessary Always Enabled
Necessary cookies are absolutely essential for the website to function properly. This category only includes cookies that ensures basic functionalities and security features of the website. These cookies do not store any personal information.
Non-necessary
Any cookies that may not be particularly necessary for the website to function and is used specifically to collect user personal data via analytics, ads, other embedded contents are termed as non-necessary cookies. It is mandatory to procure user consent prior to running these cookies on your website.
SAVE & ACCEPT
wpDiscuz
7
0
Would love your thoughts, please comment.x
()
x
| Reply
Comment Author Info