Charah vs the Red Test 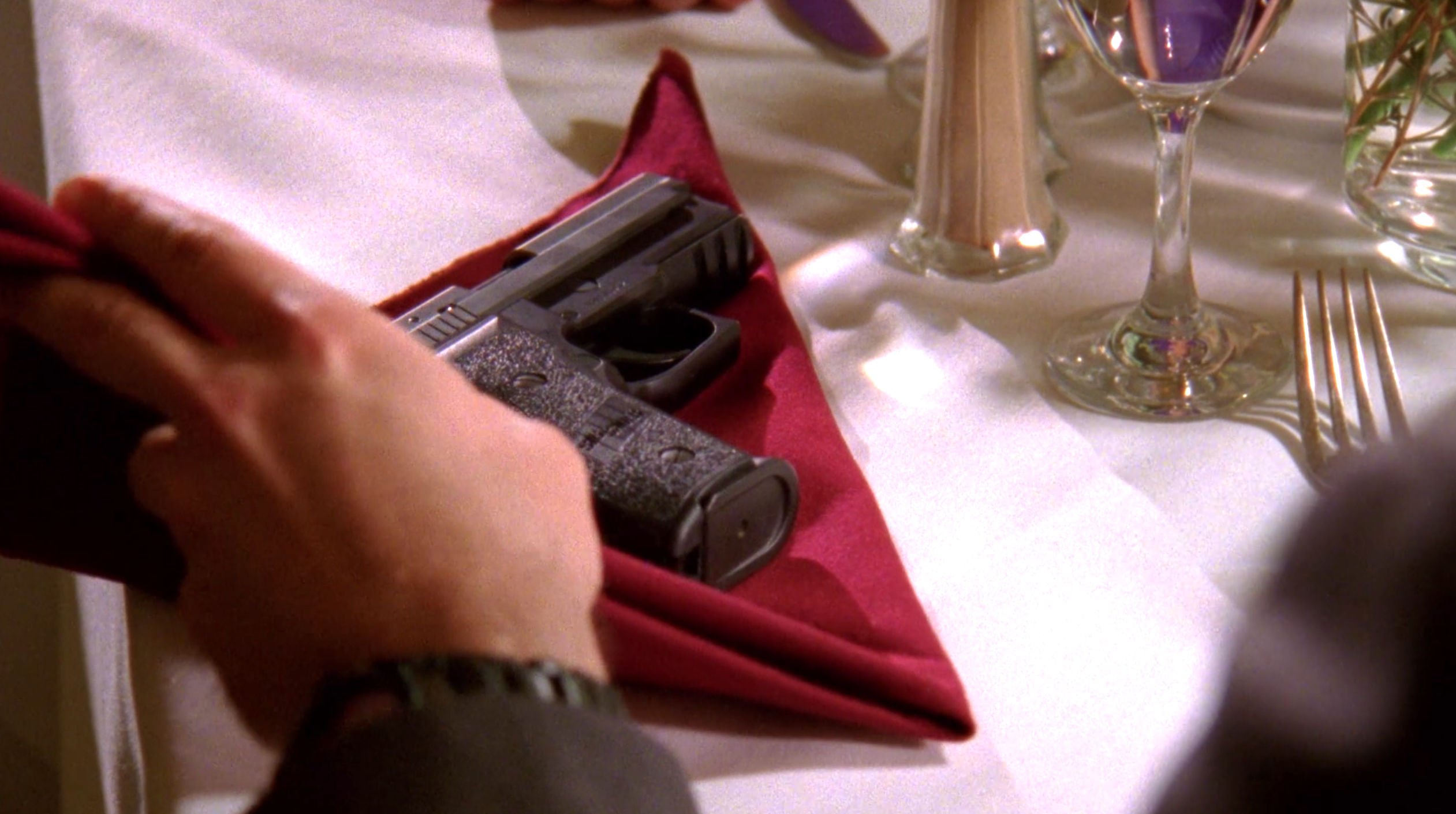 There have been lots of posts in this sub about Sarah’s apparently hypocritical behavior before and after Chuck’s red test. But if we listen to the characters, they tell us the story as the season unfolds, and there is nothing hypocritical or confusing about their behavior.

Let’s start with Chuck. Chuck’s red test is foreshadowed from the very first scene in 3.01 Pink Slip when he is given the order by Beckman to fake-kill Yuri in the Prague simulation but cannot do it. It’s foreshadowed again in 3.04 Operation Awesome, when he is asked by Shaw to fake-kill him but cannot do it. It’s foreshadowed again with Sydney at the end of the same episode, when Chuck freezes and Sydney is about to kill him but is killed by Shaw, who prophetically says, “I hate guns but it pays to know how to use one.” This is essentially the spy that Chuck will become, a spy who hates guns but knows how to use them when it’s absolutely necessary. And when is it absolutely necessary to use guns? Chuck tells us in the same episode—not when his job is at stake (Vizzini) but when the life of family and friends is at stake, and he actualizes his own prophecy on that bridge in Paris, ironically against Shaw himself. 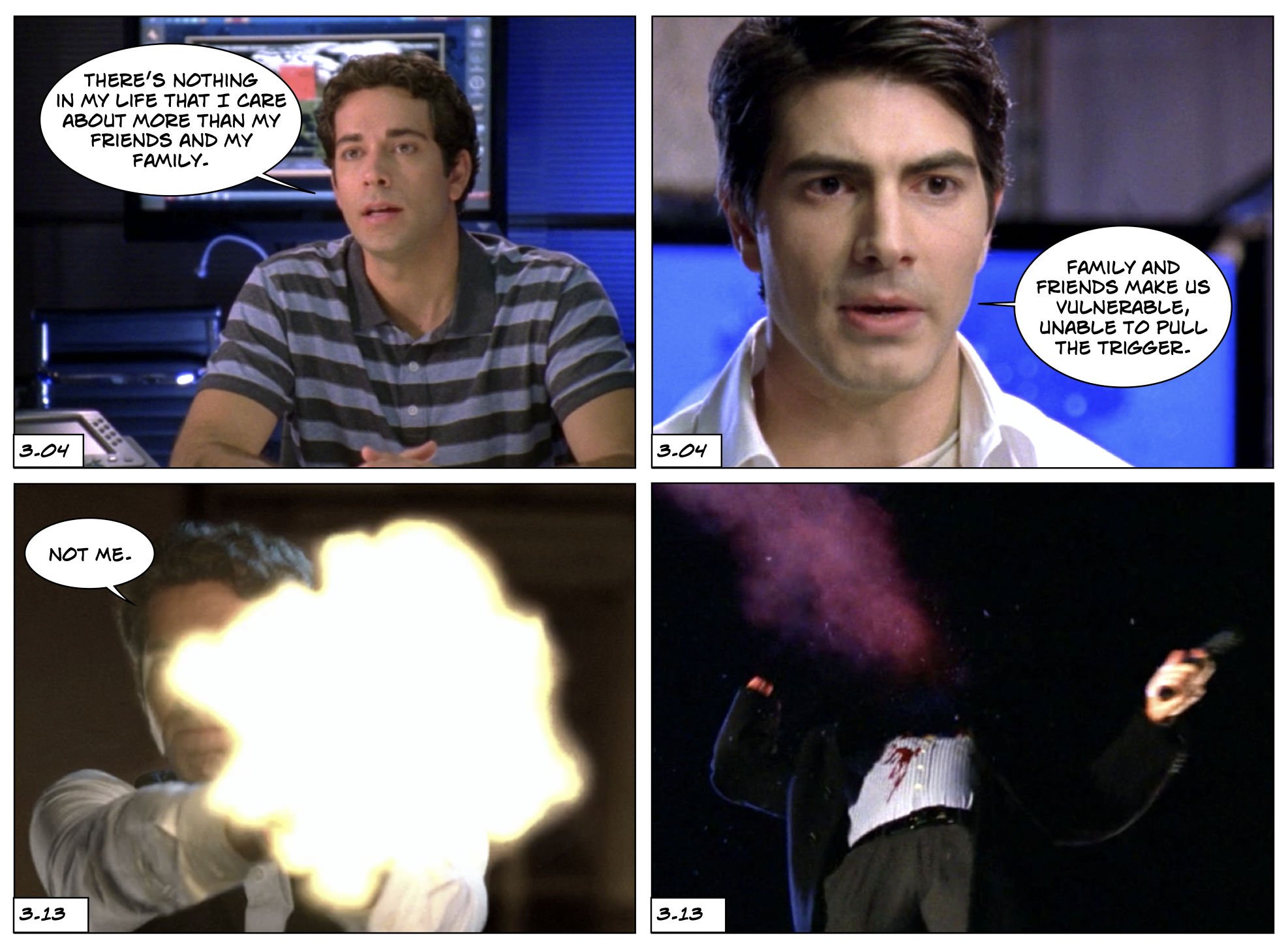 Now, the red test is something different than the above situation. The red test is an execution on government orders. It is something that not even pre-Chuck Sarah could do. That is the reason the writers show that she was not going to kill Eve Shaw. She could not do it. She only shot Eve out of fear and instincts when she thought Eve was pulling a gun out of her purse. They show it again in 5.08 Baby when Ryker gives Sarah the order to kill the bad guys who have the baby, but Sarah freezes. This scene is there to show us again that even pre-Chuck Sarah will not kill on government orders. She only kills the bad guys after Ryker reminds her that they have killed the baby’s parents in cold blood and after she sees the dead bodies on the floor. That is what gives Sarah the moral justification for killing the bad guys.

Now, pre-Chuck Casey would have shot people on government orders. He was a cold-school killer. But Casey has also been influenced by Chuck. Even Casey now needs a moral justification to kill a bad guy. That is the reason they show that Casey kills Perry on the train tracks only after Perry pulls out a gun from his ankle holster and is about to kill Chuck. Perry’s action is what provides Casey’s moral justification for the killing.

Perry’s action is also there to actualize Sarah’s prophetic statement to Shaw that Chuck can freeze and get killed by the mole. This is what actually unfolds. In other words, not even Sarah’s order will make Chuck execute the mole in cold blood. In fact, we can see that, right before Perry pulls out his gun, Chuck’s finger is releasing the trigger and is not going to kill Perry. We can see it because that finger on the trigger takes up the whole frame. Chuck is being subjected to the ultimate test of his moral principles against his ambition to become a spy and his desire to be with Sarah, and this scene of him releasing the trigger is the evidence that he passes his inner moral test as he fails the government’s red test, even if it means losing Sarah and the opportunity to become a spy and not be a loser.

Chuck’s red test is a Kobayashi Maru for both Chuck and Sarah. It is a lose-lose situation for both of them.

But if Sarah does not want Chuck to do it, then why does she give him the order? Again, it is because she is also facing a Kobayashi Maru: if she is not the one giving the order in case Chuck wants to go through with the red test, Chuck might freeze and get killed. Sarah’s Kobayashi Maru is between Chuck’s life and Chuck’s soul.

But Sarah leaves the table convinced that Chuck will not go through with his red test, will not execute the mole, and will not become a spy, which means that she will not see him again. The lyrics of the song that plays in the background (“I will see you in my sleep”) while she turns around to look at Chuck with an expression of sad longing (“you were never mine to keep”) tell us what’s in her heart at that moment. And after Chuck’s red test, a shocked Sarah tells Shaw that she didn’t think Chuck could do it.

3.11 Final Exam is the first part of the Resurrection stage in the Hero’s Journey (death/resurrection) when Chuck metaphorically dies in Sarah’s eyes and will resurrect in the next episode. Why? Because she thinks that Chuck has sacrificed his moral principles at the altar of his ambition to become a spy, and this betrayal takes place after the sweet moment they had in 3.10 Tic Tac when Chuck promised her that he would always be that guy that she met three years before. She does not have all the details and thinks Chuck has executed the mole in cold blood and judges Chuck based on this incorrect and partial information just as Chuck judged her based on incorrect and partial information after she apparently executed Mauser in cold blood at the end of 2,11 Santa Claus. The two events are clearly mirrored since season 3 is a reversal of the first two seasons. 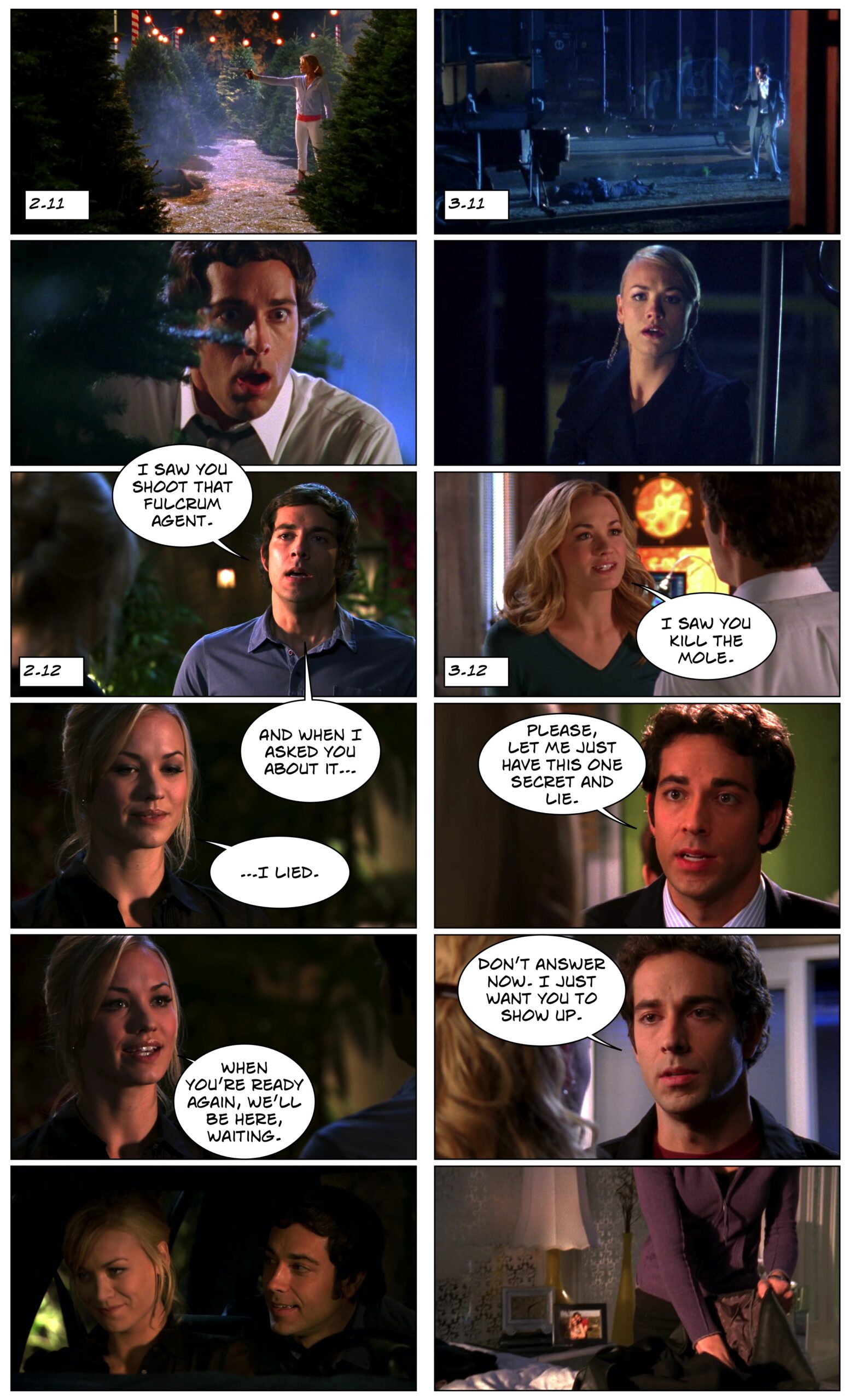 I mean, even their emotional reactions and facial expressions are the same in this Mauser/Perry reversal. 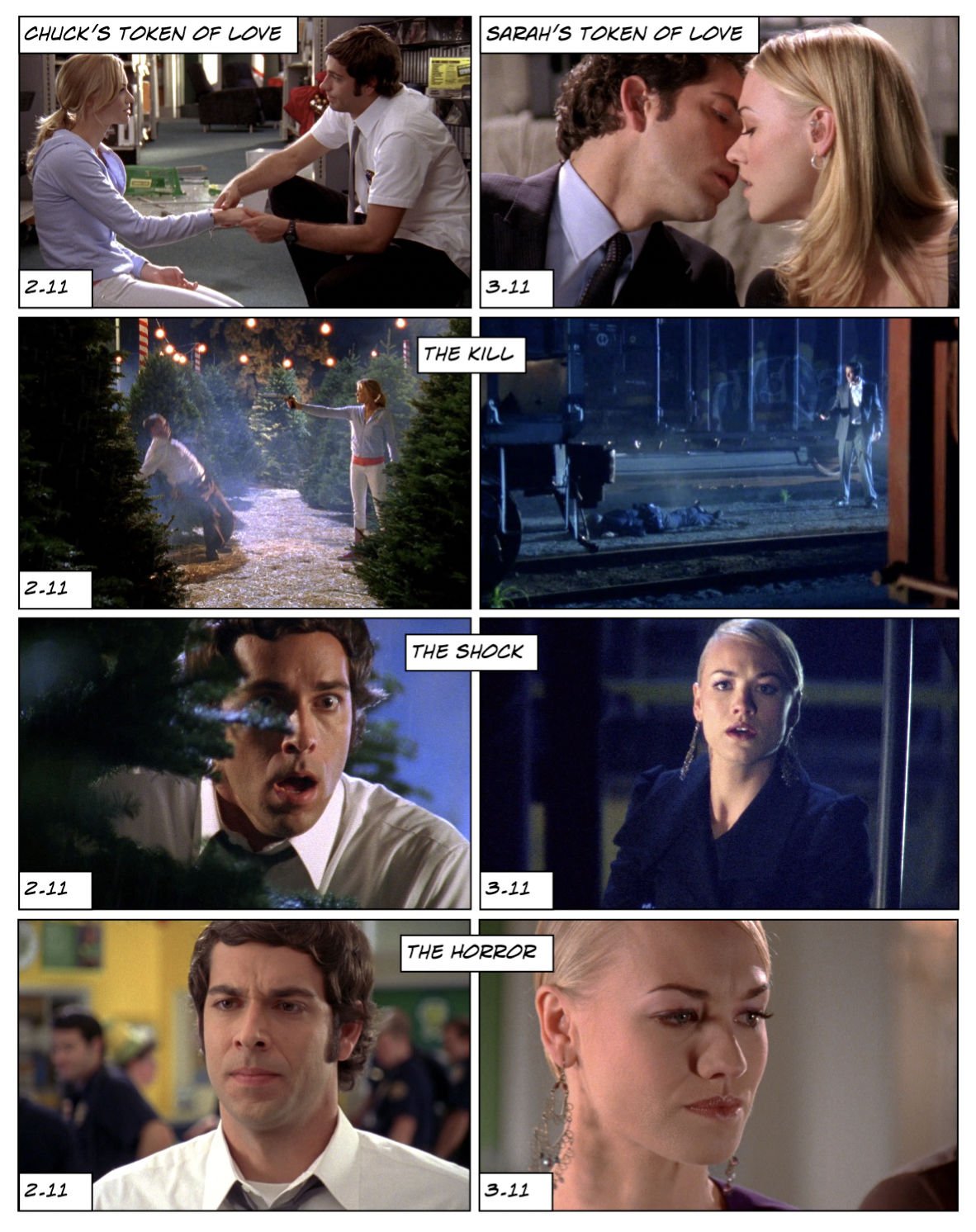 So, from Sarah’s perspective, Chuck has betrayed his moral principles, just as, from Chuck’s perspective, Sarah had betrayed her moral principles when she executed an unarmed man in cold blood. This apparent betrayal of the other’s moral principles during the two incidents is what upsets Chuck in 2.12 Third Dimension and Sarah in 3.12 American Hero. This is the common element between the two events, and they are both basing their emotional reaction on partial and incorrect information.

That is why, at the end of the episode, she reacts like that. She is basically saying, “you killed someone, something that is against your very nature, to save me.” It is her realization of the depth of Chuck’s love for her.