3.14 Chuck Versus the Honeymooners 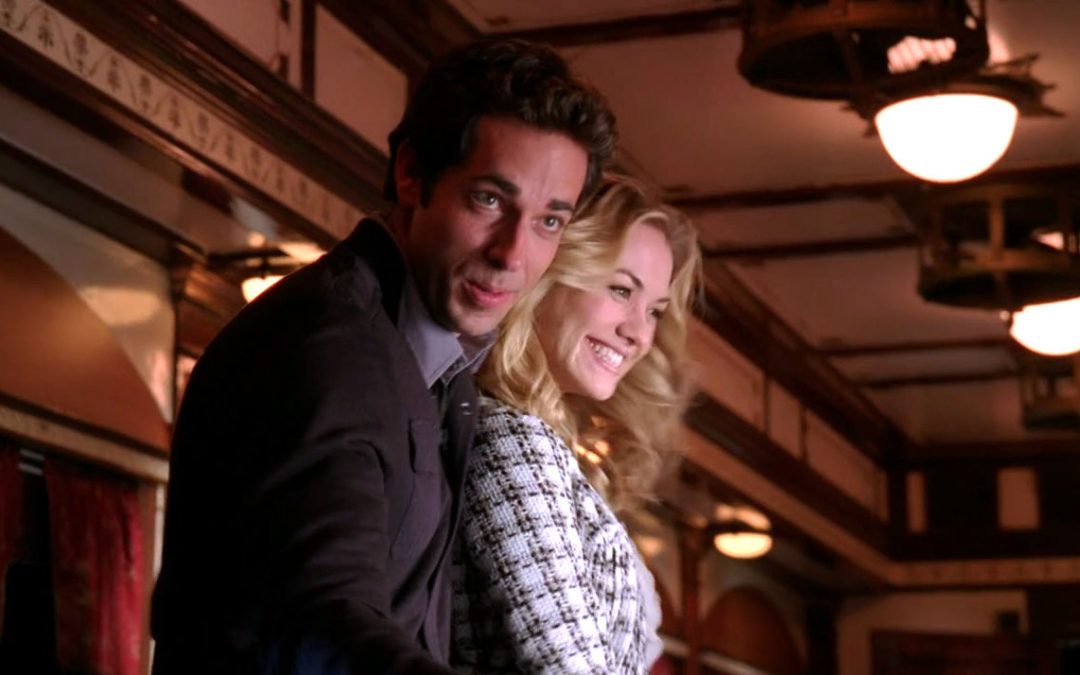 Beckman: But off the record, It’s about damn time.

Chuck and Sarah are fully attuned to each other during their honeymoon on the slowest train in the world. If the food trays represent certain “appetites” being satisfied, the fancy dishes on some of those trays do suggest Casey’s right when he tells Morgan that Chuck is going to need a walker when Walker is through with him. Funny circumstantial background images playing on the Buy More TVs as Casey, Morgan, and Devon all inquire about Chuck’s whereabouts. Casey and Morgan set out to Europe to retrieve the two lovebirds but have to deal with some Basque terrorists.

Spy Reversal. Chuck and Sarah are now in a relationship of equals, perfectly in sync at the emotional and professional level (symbolized by the fight scene while handcuffed together), a reversal from 1.10 Nemesis, when Chuck had to watch Sarah and Bryce fight together and admit they were great. Sarah also shows that she’s learned a very important lesson when she says, “I don’t want you to have to choose me over something you want for yourself.” She had originally tried in Prague to keep Chuck from changing but he needed to change for his own sake in order to consider himself worthy of her. She needed to set him free so the he could freely come back to her and be truly hers. He needed to set her free so that she could freely come back to him and be truly his. Seasons 1 and 2 were Chuck and Sarah’s Egyptian captivity—bound together, not truly free. Season 3.1-12 is their wandering in the desert. 3.13 Other Guy is their crossing of the Jordan river. 3.14 Honeymooners is their entrance in the promised land. From 3.15 Role Models on, it’s their settling in the promised land and facing their giants (Sarah’s fear of change and commitment, Chuck’s insecurities).

Love vs Duty. In a reversal from 3.01 Pink Slip, where Sarah threw her phone into a pool to shut Chuck out of her life, she throws her phone out the train window to shut the world out of her life with Chuck. Chuck and Sarah choose love over duty for the other’s sake but happily realize they can have both and start their new “love & duty” journey together.

Feelings as a liability. Are you kidding?

Red Test. Not applicable but we have confirmation that Chuck can’t hit a girl while Sarah can.

Hero’s Journey. Return with the elixir. Chuck returns to the ordinary world (Burbank) with his elixir (Sarah) and the new normal is established.