3.11 Chuck Versus the Final Exam 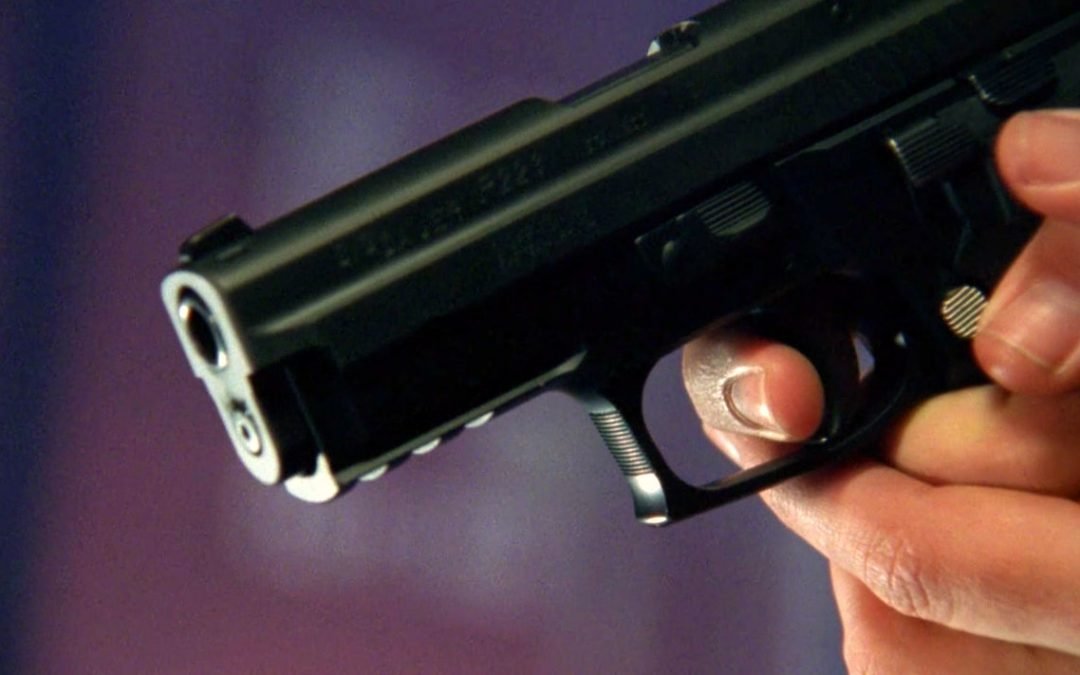 Chuck faces the ultimate test between his moral principles and his ambition to become a spy. In order for him to become an agent, he needs to pass his final exam by executing an agency mole, and the person proctoring his final test is none other than Sarah, who feels trapped and responsible for Chuck’s own dilemma. This is precisely what she was trying to protect him from when she asked him to run away with her back in Prague but is now the very person forcing him to make the ultimate life choice.

Romantic Reversal. Chuck turns on the charm and asks Sarah about her relationship with Shaw. Implicitly admitting she’s been comparing Shaw to Chuck all along and using Shaw to soothe her pain, she says it’s different (meaning: worse, a reference to her 2.14 conversation with Anna). Sarah was looking for real with Shaw but can’t find it*. Sarah’s relationship with Shaw is the spy half of her real life. Sarah realizes it’s not worth it. She has experienced Devon’s point. She’s been chuckified and even the best companion from the special world is no longer enough because the special world itself (being nothing but a spy) is no longer enough. She can’t go back. That’s why, when Chuck asks her for another shot now that he has a real chance of becoming an agent, she offers no resistance. Having a double life is only worth it if you don’t have to give up half of your real life, whether it’s the normal half or the spy half. And the only way to do that is for Chuck and Sarah to be together because they don’t just mirror each other (like Chuck and Hannah or Shaw and Sarah) but they complete each other, as their relationship is the only one that can give them both halves of a real life—Sarah can give Chuck the spy-life half that Hannah couldn’t, while Chuck can give Sarah the normal-life half that Shaw wouldn’t.

(* In a way, Shaw does represent what is real about the spy-half of a real life; whereas Cole represented the façade of the spy life with his bravery, glamour, and sexiness, Shaw represents the stark reality of it with his wooden stiffness, unfeeling pragmatism, and inner loneliness. It’s the sort of real that deadens a soul instead of saving it, and Sarah needs to be saved.)

Just as in 2.11 Santa Claus, Chuck gave Sarah a token of his love (his mom’s charm bracelet) and Sarah shocked him by executing Mauser, in 3.11 Sarah gives Chuck a token of her love (an almost kiss) and Chuck shocks her by allegedly executing Perry. 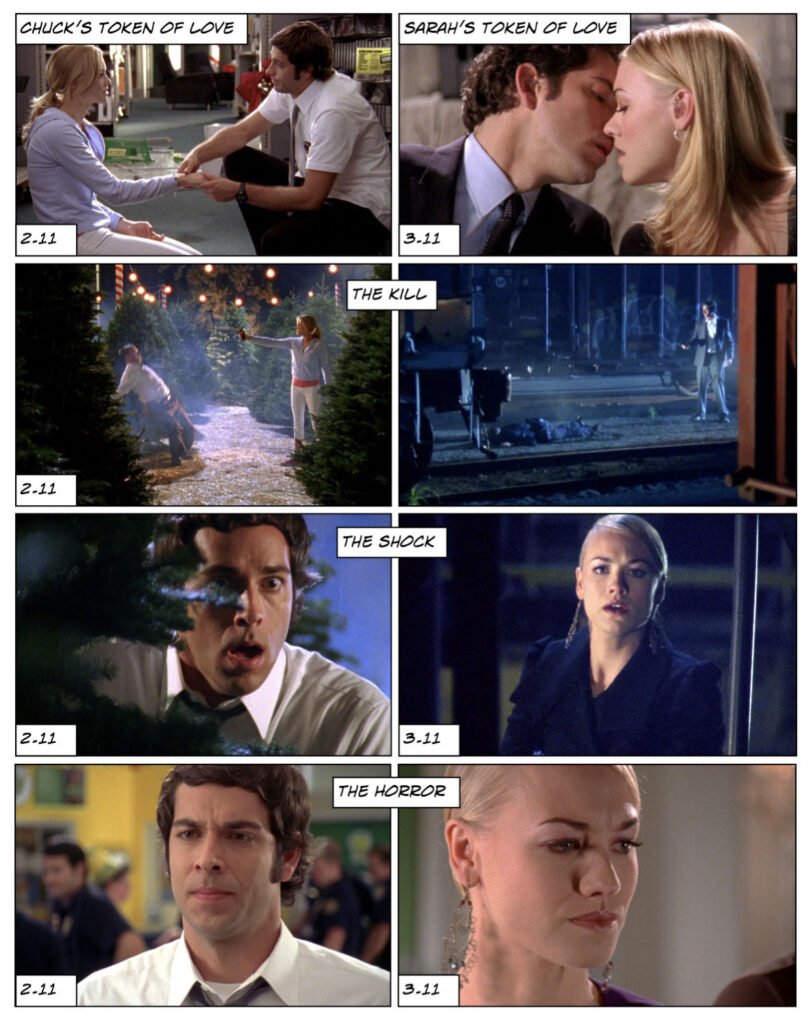 Spy Reversal. Chuck is very professional and efficient when setting up his equipment for the stakeout during his final spy exam, in contrast with his clumsiness when preparing for his first spy mission in 1.03 Tango. Chuck completes (what he thinks is) his final exam while Sarah observes from Castle. This episode is a reversal of 2.20 First Kill. Chuck works with his ex-girlfriend Sarah, just as in 2.20 he worked with his ex-girlfriend Jill. Chuck has his final exam with Perry at the end of this episode (kill him or lose everything) just as Sarah had her final exam with Chuck (bunker him or commit treason and lose everything). Chuck comes very close to executing Perry but ultimately rejects it, just as Sarah came very close to bunkering Chuck in 2.20 but ultimately rejected it. Sarah thinks she can’t trust Chuck anymore, just as Chuck was beginning to think in 2.20 that he couldn’t trust Sarah anymore.

Perry’s execution scene is a reversal of Mauser’s execution scene in 2.11 Santa Claus. Sarah’s execution of Mauser took place after Chuck had given her his mother’s charm bracelet as a token of his love for her. Chuck’s “execution” of Perry takes place after Sarah gave Chuck an almost-kiss as a token of her love for him. After Chuck’s “execution” of Perry, Sarah is shocked, just as Chuck was shocked after her execution of Mauser. (The dim lighting in both scenes symbolizes the spiritual darkness of the moment, the visual obstructions symbolize the observer’s limited grasp of the events, and their physical distance symbolizes their emotional distance.) 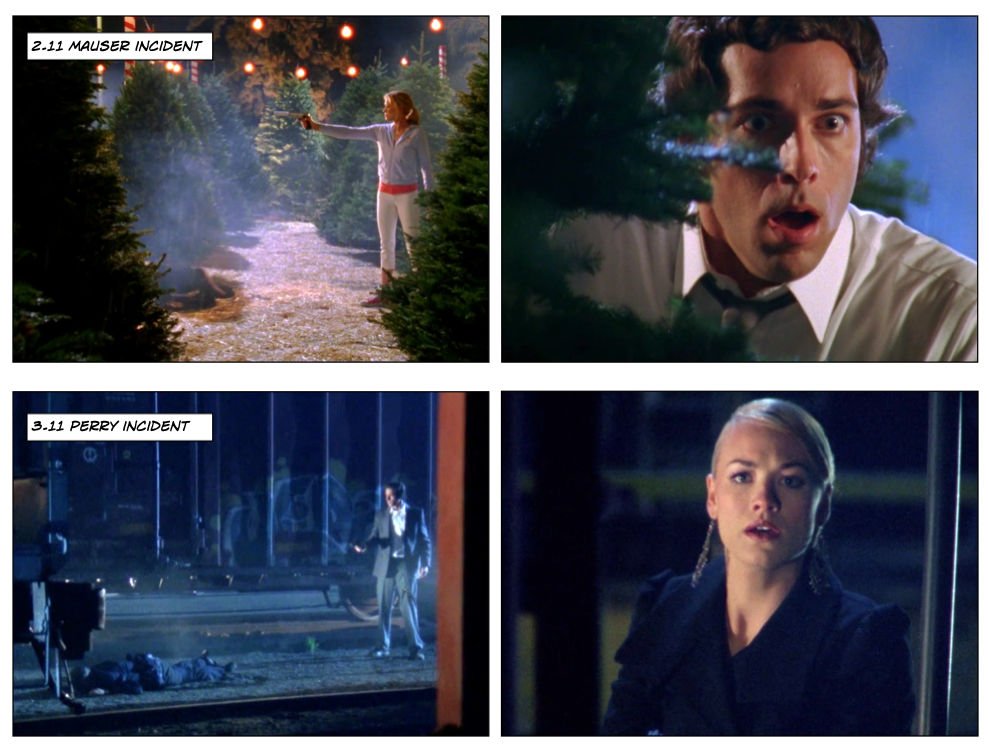 In 2.15 Beefcake, Chuck felt he was not man enough to compete with James Bond Cole and his “impressive’ manhood. Well, look who’s manning up. 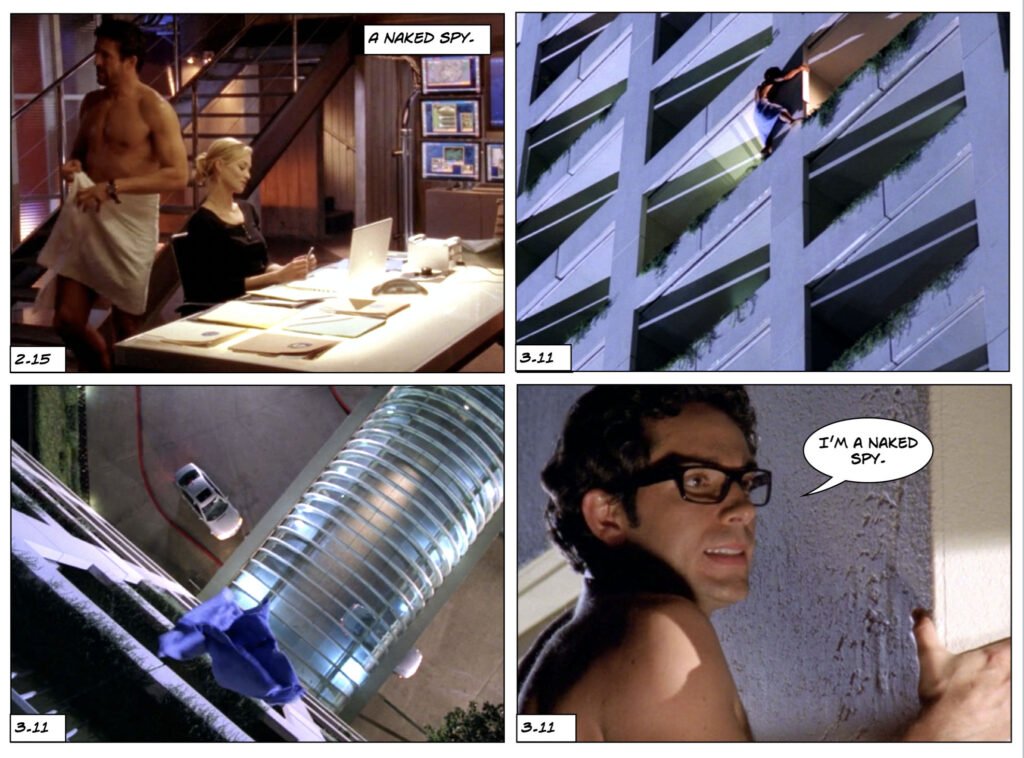 Love vs Duty. During the stakeout, Chuck tells Sarah that, if he becomes an agent, they don’t have to choose between the job and them as a couple. They can be together, thus having both love and duty. She accepts.

Feelings as a liability. Chuck expresses his feelings to Sarah but the issue of whether feelings are a liability or not is not yet addressed (openly or not).

Red Test. Here comes the climax of the season: the clash between Chuck’s moral principles on the one hand and his duty-bound ambition to become a spy for the greater good and his desire to be with Sarah on the other. Both Chuck and Sarah are facing a Catch-22 and Shaw wins the jackpot by using Sarah’s feelings for Chuck against Chuck, to have her do the very thing that she wanted to protect Chuck from back in Prague and that will evict Chuck from her heart for good so she can be his, with no baggage. Chuck does not execute Perry but Sarah thinks he did and is in shock (first stage of SARAH: shock, anger, resistance, acceptance, healing).

Hero’s Journey. Resurrection, final exam. The lesson Chuck learned about himself during the Ordeal stage in Fake Name is tested one final time in the ultimate trial.

Love your analysis and perspective on these episodes.

Actually, I just screenshot the episodes in SD (standard definition) and put them together in Comic Life. Now that the show is back on Amazon Prime, I might be able to screenshot it in HD.

Please due. You have a knack for selecting the most interesting and important shots.