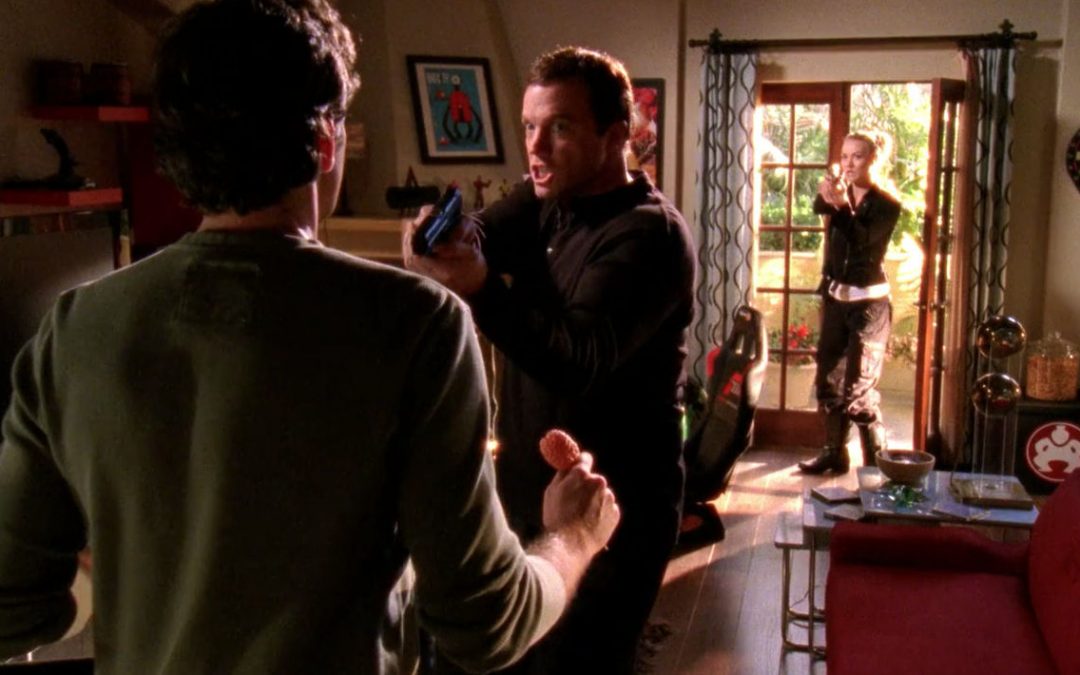 With Shaw in DC, Team Bartowski is tasked to complete a trace cell mission. Casey commits treason in order to protect his old fiancée from the Ring. Chuck and Sarah come to the rescue. Devon and Ellie model the perfect couple for Chuck and Sarah. Devon was the one who told Chuck that having a double life is not worth it if that means giving up half of one’s real life. Ellie is now the one who brings it full circle for Chuck. “Dreams change,” she says to a receptive Chuck, “and if there is one thing I know for sure is  that I want to be with Devon. And it might require some sacrifice from both of us but he’s the best choice I’ve ever made.” Time for Chuck to rethink his priorities.

Romantic Reversal. Casey pokes Chuck by mentioning Sarah’s upcoming personal trip to Washington to meet Shaw, just as he poked Sarah about Chuck’s intimate time with Hannah in 3.08 Fake Name. Chuck, who was oblivious to the emotional pain he had caused Sarah then, now experiences that same pain. 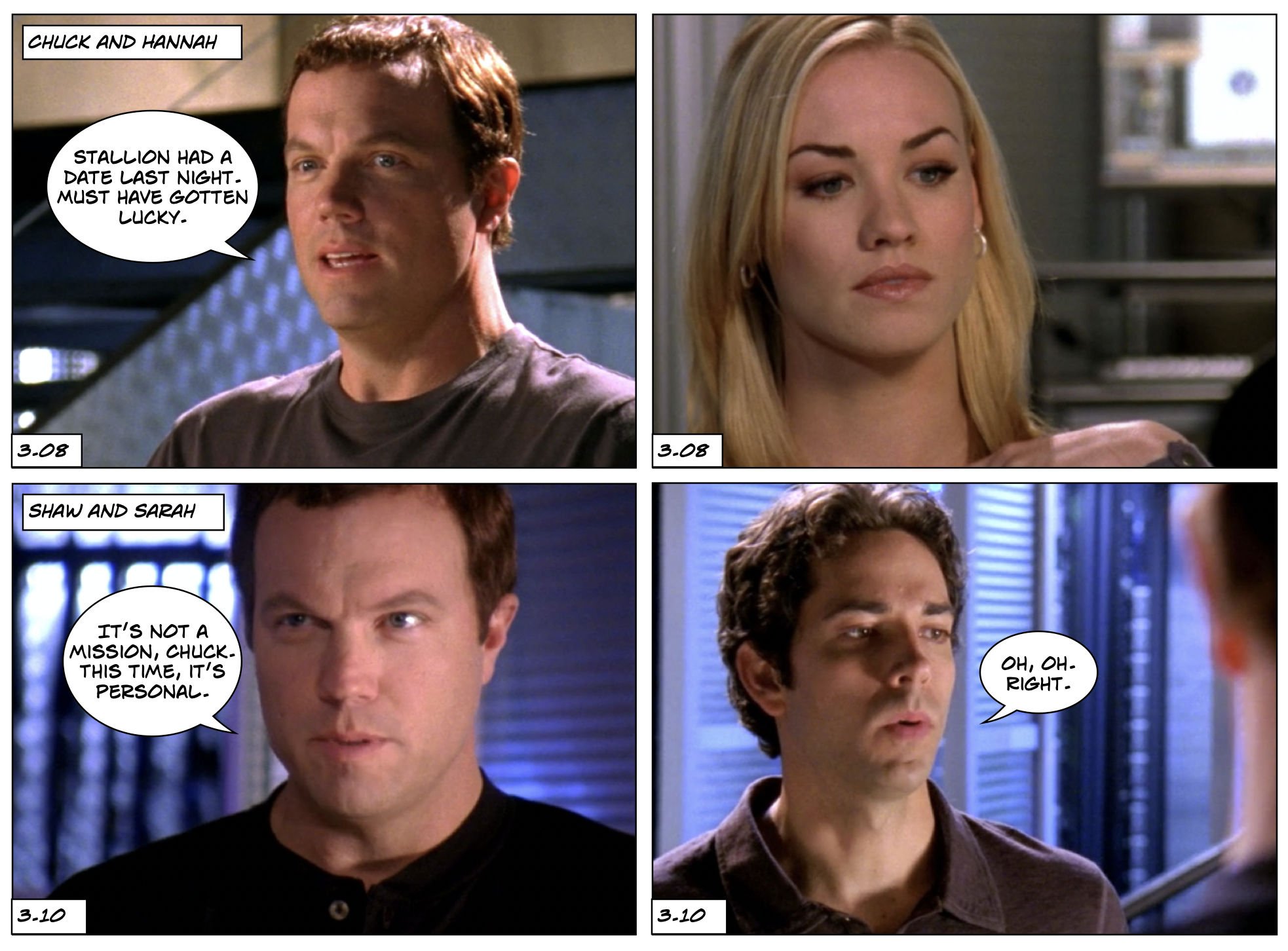 Chuck tries to talk to Sarah but she cuts him off with a broken voice. She’s still trying to not be in love with him, still sacrificing her heart’s desire so that Chuck can realize his dream of becoming the perfect spy without her standing in his way. She hasn’t had her epiphany yet; Sarah is an introvert with no friends and no Morgan to help her realize she’s fooling herself. Her epiphany will come during her trip to Washington, DC and the reality of her new life and assignment there; the conflict Sarah shows at Beckman’s offer and later in the taxi is her dawning realization she may be unable to leave her home (Chuck), as she couldn’t in 2.22 Ring. Chuck and Sarah’s emotionally intimate moment is interrupted by Sarah, just as their physically intimate moment in 2.21 Colonel was interrupted by Chuck (Morgan is involved in both moments). 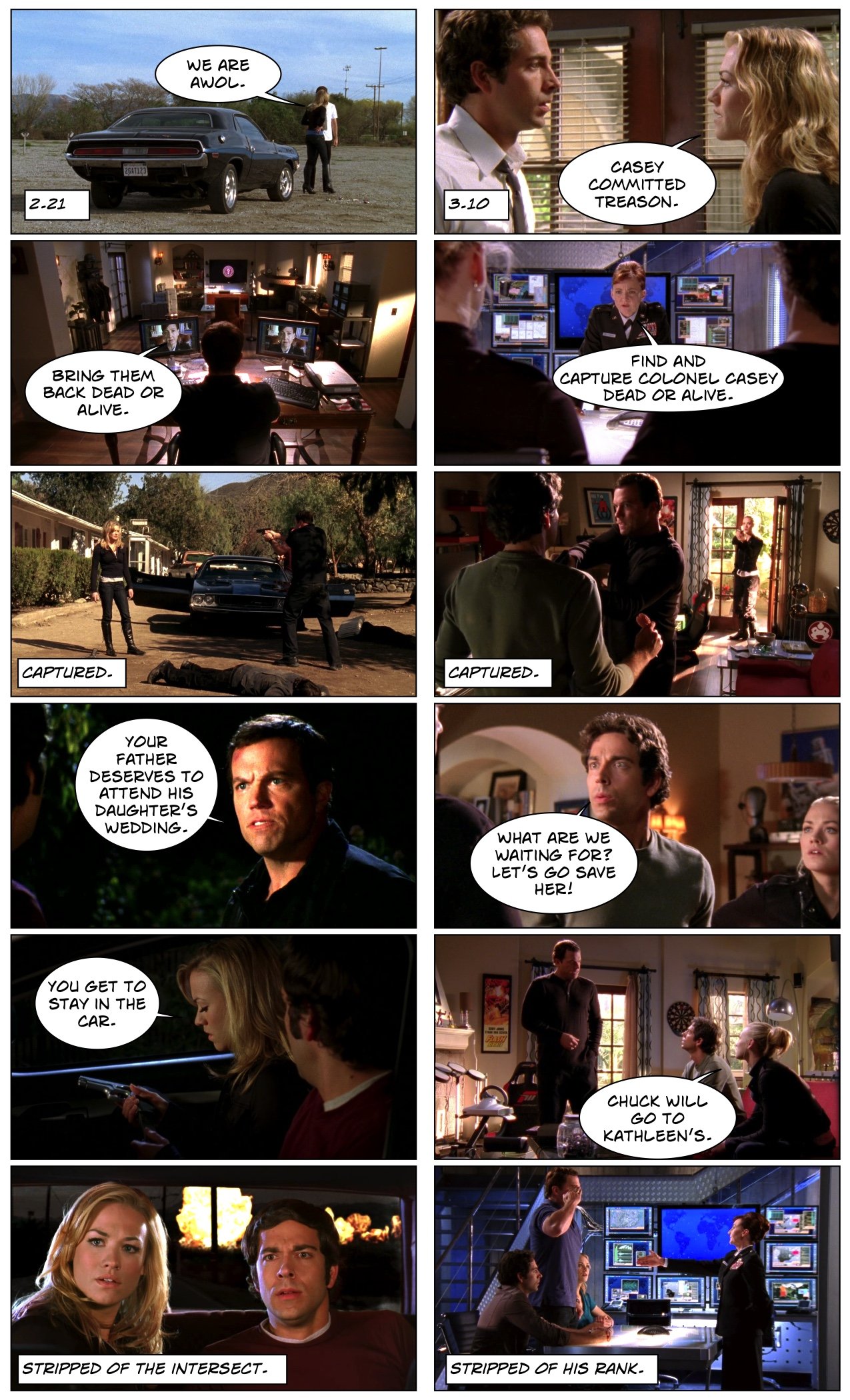 The scene between Sarah and Chuck about deciding to save Casey is in contrast to the one in the previous episode between Sarah and Shaw about deciding to sacrifice Chuck. Contrary to Shaw, who put the mission first and was ready to sacrifice people for the job, Chuck puts people first and is ready to sacrifice the job for people. And Sarah was hoping he’d say that because that was always the defining characteristic of her Chuck (and also what she’d done for him since the pilot episode).

Love vs Duty. Chuck makes a timid attempt to talk to Sarah about them (love) while they prepare to save Casey but Sarah cuts him off (duty). Chuck deals with the situation much more professionally (duty) than he did in 3.02, when he let his feelings for Sarah compromise the mission at Karl’s house. Together, they are as professional as Shaw and Sarah were during the mission at the resort in 3.09. The hero is learning to balance love and duty.

Feelings as a liability. Chuck is attuned to his feelings for Casey when he decides to help him even if this can cost him his badge and freedom. Feelings can be a liability (arrest, treason charge) but also a strength (honor, inner duty, greater cause). Chuck’s ability to reign in his feelings in the emotionally intimate moment with Sarah is of fundamental importance because it shows he’s learning to use feelings as an asset and not as a liability.

Red Test. Under the effect of Laudanol, Chuck almost kills a Ring goon but Sarah, who’s just witnessed an identical scenario with Casey and Keller, brings him back from the brink. (Cool fight, though. Would have made Neo proud.)

Hero’s Journey. The road back. As Sarah emphasizes, Chuck has to choose between his journey of the heart (becoming a spy) and the journey of a higher cause (helping Casey). By choosing the higher cause, Chuck is back and regains Sarah’s trust but must deal with the fact she’s with Shaw (the consequences of the hero’s actions in Act 2) and must figure out how to win her back.

Her epiphany will come during her trip to Washington, DC

. She is trying to move on from Chuck and reluctantly commits to trying to make it work with Shaw.I have to disagree with this one. I think you’re misreading this one. If you mean that like Chuck, she figures out in DC she loves Chuck or that leaving would be more difficult than anticipated, I think you’re off on this one. She comes back and is ready to move as acceptance of the situation as I stated in the link below. She knew it would be difficult and knows the limitations in a relationship with Shaw but there’s no indication she’s changed her mind when she gets back. In fact, I’d say it’s the opposite. She went to discuss the job and came back and had accepted the job. She did not go to DC thinking she was happy to move on and she didn’t have an epiphany. She had accepted what she felt was the reality of the situation.

You are correct in that she is trying to move on when she comes back from DC but she’s ready to get back with Chuck when he asks her back during the 3.11 stakeout, while in 3.10 she stopped him from getting personal while they were getting ready to save Casey. I think her change of heart between 3.10 and 3.11 is due to her trip to DC and the realization of the reality of the permanent separation from Chuck.

I took the thing in 3.10 as more of a “not now because I’ll break down” type of thing than “I don’t want to hear it ever” thing. She was reflecting on what she liked about Chuck and what it cost so she cuts off Chuck because she knows she’s exposed and her defenses are weak. That’s why I don’t think it’s surprising she’s receptive to Chuck on the stakeout but I don’t think that’s because of DC. I think the same situation would have happened had DC never happened. I think it’s Chuck getting past those defenses again during the stake out but he hasn’t told her he wants her back until the stake out. I never felt like she was ever fooling herself about Chuck like he was fooling himself about her and she knew she’d cave if he told her he wanted her back. Each time she expressed the end in sight (meaning the team breaking up) in previous episodes, she studied him to see his reaction and each time, he let her down. Her regret of how things were never changes until after the mole. She had been mourning Chuck’s decision to move on from her for the entire time. I think she’s been consistent in that way. That’s why I don’t think there was an epiphany. There was acceptance and then distancing to spare her pain.

The way I read things, in 3.10 she’s still desperately trying to not stand in Chuck’s way of becoming the perfect spy, as per her statement in her “bye, Chuck” speech at the end of Mask and her statement right before cutting him off in this episode. But when the reality of both their different assignments hits home (she finds out in DC and trades glances with Chuck in 3.11 when he’s told by Beckman), she doesn’t even try anymore. It seems to me that, if nothing had changed for Sarah between 3.10 and 3.11, she would be more receptive to Chuck in 3.10, while they are merely preparing for a mission, rather than in 3.11, during his final exam. I take it that, the realization that they are going to be separated for good changes things quite a bit for her, as Chuck uses his history with her to his advantage during the stakeout.

The original reason for Sarah to go to DC was to be with Shaw. Later Sarah was offered a job. Sarah’s commitment to the job in DC was made after 3×10 and before 3X11. Shaw put himself out there to win Sarah’s heart but Sarah made no commitment to him. He wined and dined her, bought gifts, and did couples massages.

In 3×11 without being in a committed relationship, Sarah and Chuck were free to flirt and almost kiss.

I read somewhere on this blog that the commitment between Shaw and Sarah was to spend a life together. No it was not. It was a commitment to start over together in DC without each other’s baggage.

The commitment to Shaw took place in the beginning of 3×12 when in angry Sarah told Chuck she was going to DC to be with Shaw. The dinner date was where Sarah and Shaw toasted that commitment. Five minutes later Sarah was checking out her available options with Chuck. If the “so called” commitment meant anything REAL to her, Sarah would have insisted that Chuck go away.

This website uses cookies to improve your experience while you navigate through the website. Out of these, the cookies that are categorized as necessary are stored on your browser as they are essential for the working of basic functionalities of the website. We also use third-party cookies that help us analyze and understand how you use this website. These cookies will be stored in your browser only with your consent. You also have the option to opt-out of these cookies. But opting out of some of these cookies may affect your browsing experience.
Necessary Always Enabled
Necessary cookies are absolutely essential for the website to function properly. This category only includes cookies that ensures basic functionalities and security features of the website. These cookies do not store any personal information.
Non-necessary
Any cookies that may not be particularly necessary for the website to function and is used specifically to collect user personal data via analytics, ads, other embedded contents are termed as non-necessary cookies. It is mandatory to procure user consent prior to running these cookies on your website.
SAVE & ACCEPT
wpDiscuz
5
0
Would love your thoughts, please comment.x
()
x
| Reply
Comment Author Info