3.08 Chuck Versus the Fake Name 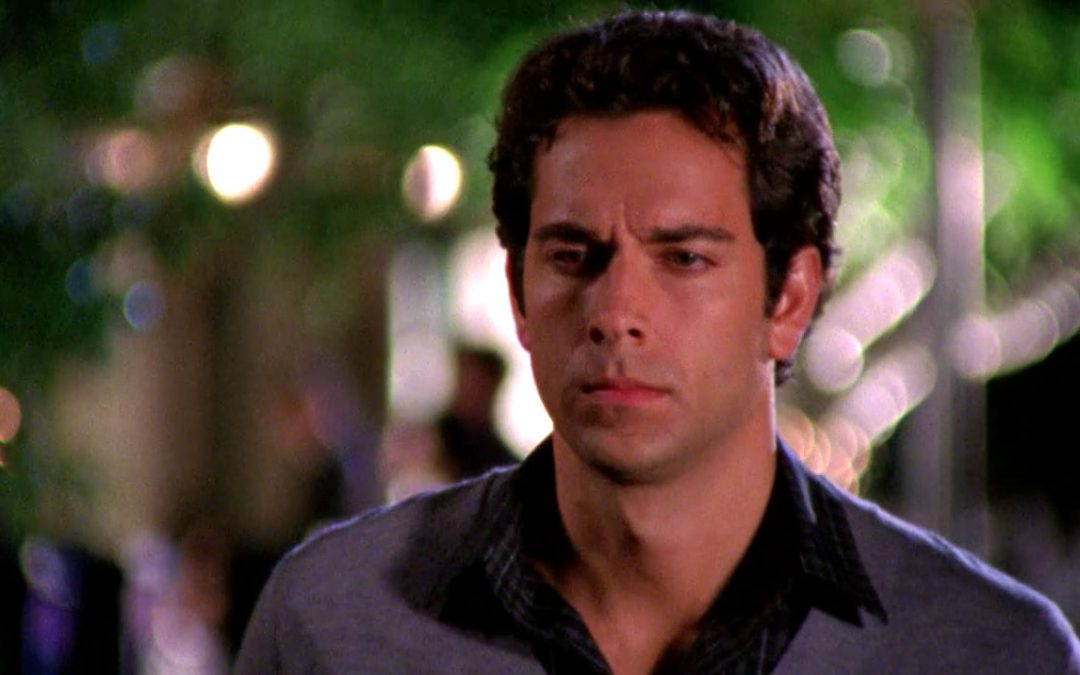 Sarah says she has the reputation of falling for the guys she works with and, wanting to keep things professional, says no to Shaw’s proposal of a spy relationship but then freaks out about Chuck, confides in Shaw, and starts a relationship with him out of emotional comfort. She tries to see Chuck in Shaw (Buy More crockpot, Bamboo Dragon food) and is subconsciously trying to recreate a Chuck in the spy half of a real life but it won’t work because, although Shaw relates to spy Sarah, he doesn’t respect the normal half of a real life because it makes spies weak. All he seeks is a professional spy relationship on a last-name basis with physical intimacy on the side because falling in love is a mistake he made once and does not want to make again.

Chuck hears Sarah’s concerned words to Shaw and is shell-shocked. He embarked on his spy journey to become a hero worthy of her respect and she makes him realize he’s a hell of a guy living a hell of a lie instead, so he breaks up with Hannah because he doesn’t want to lie to her anymore and use her to soothe his pain. Even though Hannah is the best possible companion from Chuck’s ordinary world, his relationship with her will not work and not because Sarah or the CIA got in the way (as with Lou) but because even the best possible ordinary world companion can only share half of his real life and Chuck realizes it’s not worth it (or even fair to Hannah). If in season 1, a person like Lou or, even better, Hannah was everything Chuck was looking for at a time when he just couldn’t look, now that he can look, he realizes it’s no longer enough. There are things in his life Hannah can’t understand and that he can’t explain to her. He’s been dishonest and it’s not fair to her. She deserves to be with someone she can know completely and he can’t offer that. These are the very words he uses to break up with her. He now gets Devon’s point because he has experienced it. He’s no longer the “normal guy who wants a normal life” he described to Sarah in his break-up speech at the end of 2.03. Chuck has been sarahfied and even the best companion from the ordinary world he wanted in the first two seasons is no longer enough because the ordinary world itself is no longer enough. He can’t go back.

Fake Name shows our heroes living a lie—Chuck living Rafe’s life, Coburn living Casey’s life, Chuck living a lie with Hannah and breaking up with her because of it, Sarah starting to live a lie with Shaw because she’s lost hope in a future with Chuck, while Living a Lie! plays in the background at the end of the episode. Chuck’s pursuit of his career has alienated him from his real self and, as a consequence, from Sarah, family, and friends. Hannah finally cuts through the last veil of false self-image Chuck has of himself (“I am a nice guy!’) and angrily makes him realize he’s not a nice guy.

Sarah selflessly pulled back from Chuck at the end of Three Words to protect him and let him become the perfect spy he wants to be but that decision is taking a huge toll on her; she’s watched her Chuck progressively disappear before her eyes (the very fate she wanted to avoid in Prague) and, without Chuck as her anchor to reality, she’s lost. She has no real self apart from him. As the daughter of a con man and then as a spy with a new identity after another, everything that is real about Sarah is related to Chuck. She only began to exist as a real person when she met him. That’s why, now that he seems to be himself lost, her buying Chuck-related crockpot and food for Shaw is a desperate attempt to see Shaw as her Chuck. When Shaw says to her, “if this is you, I want more,” she sees it as an invitation to find real in the spy half of a real life. And when Shaw calls her by her real name, she hopes he can be her new anchor to reality.

Romantic Reversal. Just as in 1.11 Crown Vic, Sarah (on her ugliest behavior) angrily ignored her feelings for Chuck by living a lie, thus pushing Chuck away, here Chuck (on his ugliest behavior) ignores his feelings for Sarah by living a lie, thus pushing her away (also symbolized by his kicking her across the room during the mission—his last flash before the one following his liberating conversation with Morgan in 3.09).

Sarah, who has no concept of real other than with Chuck and is desperate to find her real self since Chuck has left her a work of real-life redemption in progress, thinks her spy relationship with Shaw will be real because she shared her real name with him, just as Chuck had asked her to do in 1.04 because knowing something real about her would have made their relationship real. And just as Chuck brought her favorite (pizza with no olives) at the end of 1.04, she brings Shaw Chuck’s favorite (Bamboo Dragon food) in her subconscious desire to find Chuck in Shaw. In a dramatic reversal from season 1, when Chuck craved reality while Sarah was fighting it, Sarah is now acting on Chuck’s request to reveal her real name because she now craves reality while Chuck is fighting it. In her inexperience of what makes reality real, she doesn’t yet realize that what she really needs is not a man who merely knows her real name without an interest in the real Sarah but the one man who knows and is interested in the real Sarah (end of 2.04 Cougars). Without him, even her real name is a fake name.

Spy Reversal. Chuck is in the field with Casey. Sarah’s in the van with Shaw. Chuck’s a great method actor, readily capturing Rafe’s persona, and looks technically and objectively attractive enough to take Sarah’s breath away. 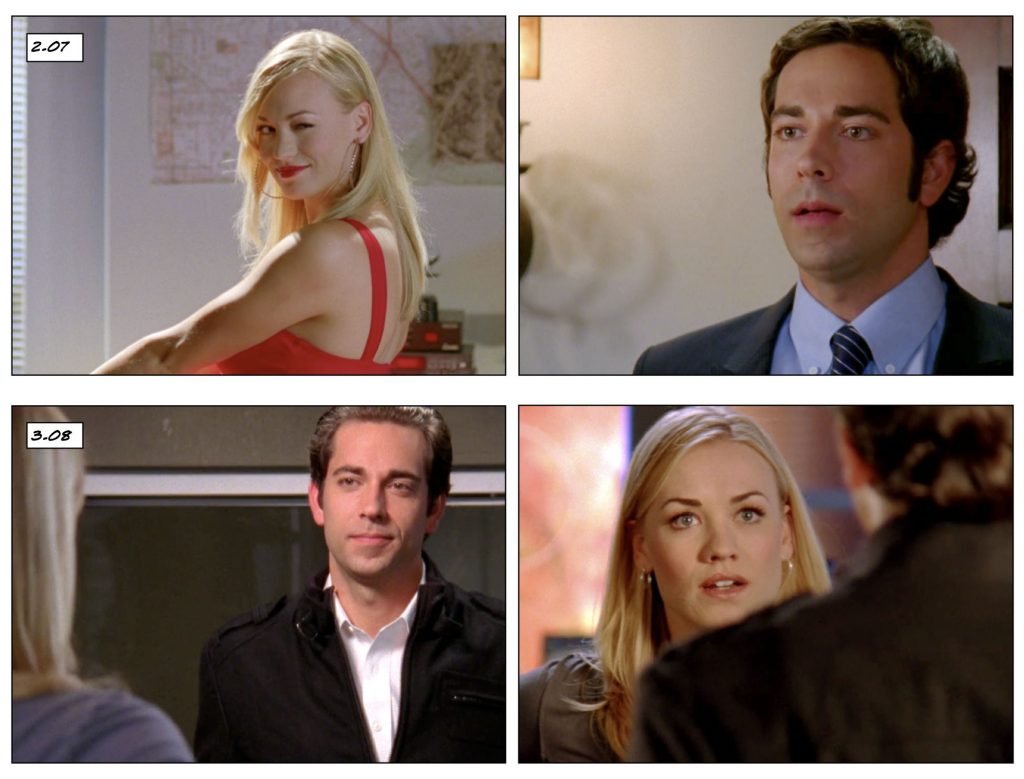 I could see how a typical heterosexual person would find them technically, objectively attractive.

Love Vs Duty. In a stark reversal from the first two seasons, Chuck is all about duty while Sarah is all about feelings and Sarah’s feelings bring Chuck back to the reality of what he’s becoming.

Feelings as a liability. Sarah’s feelings for Chuck cause her to open up to a virtual stranger. Chuck realizes how his decision to ignore his feelings is hurting the people he loves. Ellie helps Chuck realize he might still have feelings for Sarah.

Red Test. He plays Rafe the assassin and, as Rafe, doesn’t kill Casey when the latter’s real identity is made by the goombahs Matty and Scotty, and, as Rafe, refuses to kill Shaw using the rifle because “he wants to do it in person.”

Hero’s Journey. Approach (descent into hell) and ordeal. Chuck’s lies catch up to him; he hears Sarah’s words to Shaw, reaches rock bottom and breaks up with Hannah. From 3.05 to 3.08, Chuck experiences remarkable growth as a spy in Sarah’s eyes and in the eyes of Shaw and Casey but at the expense of his chuckness. Shaw shows the first faint traits of the shapeshifter archetype with his jealousy of Chuck’s hold on Sarah’s affections. The Ordeal is the lowest point in the hero’s journey, the dark night of the soul. The only way is up.