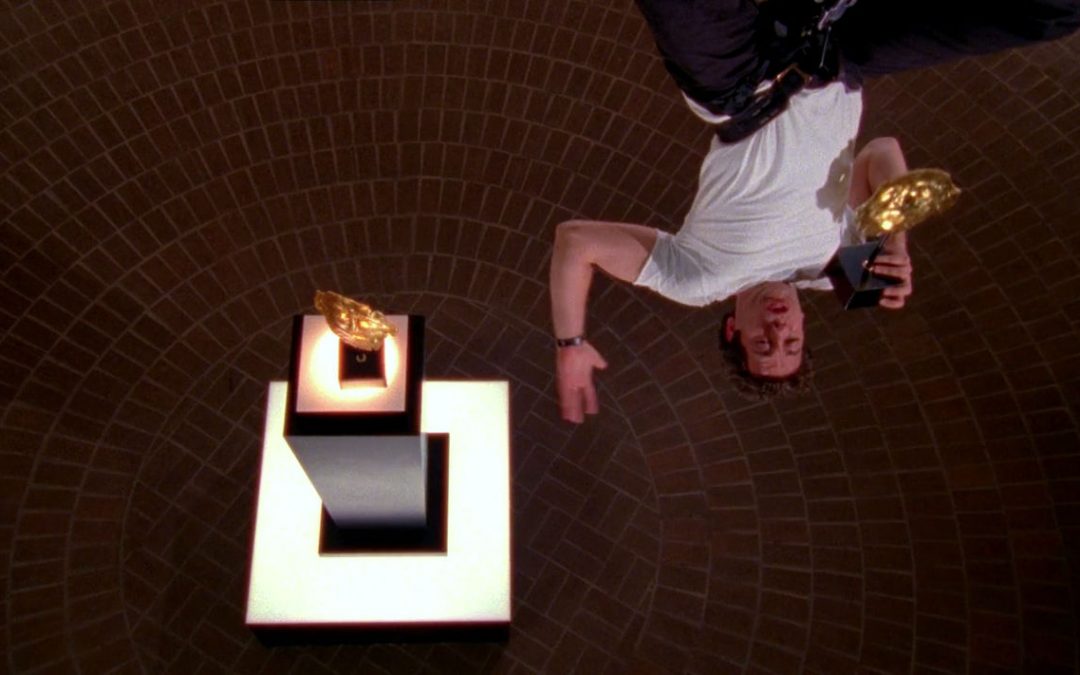 Sarah realizes she was holding Chuck back with her protectiveness and not just professionally. In her desire to let him succeed as a spy, she selflessly lets go of him. Chuck, thinking Sarah has moved on and that they shouldn’t be in love anyway, tells her that Shaw is a hero and selflessly lets go of her. They are both trying to do the selfless thing because they want the other to be happy but neither one is happy at the end of the conversation.

Hannah makes a play for Chuck. Shaw makes a play for Sarah. Chuck hooks up with Hannah. Sarah sighs, considers Shaw as a suitor, and lowers her eyes in resignation. Sarah tells Shaw a relationship is dangerous but Shaw reassures her he’s the safest guy in the world—he made the mistake of falling in love with a spy once and it won’t happen again. He’s emotionally unavailable and thus a spy-safe choice in a relationship devoid of feelings.

Romantic Reversal. This episode is a reversal of 1.08 Truth (truth/mask). Shaw takes advantage of his cover as Sarah’s boyfriend to do what he’s secretly wanted to do and unexpectedly kisses Sarah on the neck during a mission, just as Sarah took advantage of her cover as Chuck’s girlfriend to do what she’d secretly wanted to do and unexpectedly kissed Chuck on the neck in the Wienerlicious closet while preparing for a “mission” with Devon and Ellie.

Love vs Duty. In a scene reminiscent of their jealous exchange in the trunk of Stavros’s car in 1.09, Chuck and Sarah can’t help being jealous of Shaw and Hannah respectively (love) but, by the end of the episode, they selflessly let each other go (duty).

Feelings as a liability. Both Chuck and Sarah override their feelings for each other.

Red Test. Chuck uses non-lethal methods to deal with Vasillis and his men in the museum in order to find the antidote to save Shaw, Sarah, and Hannah.

Hero’s Journey. Tests, allies, enemies. Approach. Chuck is tested several times and is by everyone’s reckoning the hero of the day. Even Sarah is impressed. Hannah has an adoring look on her face as she says to Chuck, “you saved my life.” By the end of the episode, the hero and heroine are about to approach their personal and relational hell, the next stage of the hero’s journey.

I think I briefly mention it in my bullet points…