3.06 Chuck Versus the Nacho Sampler 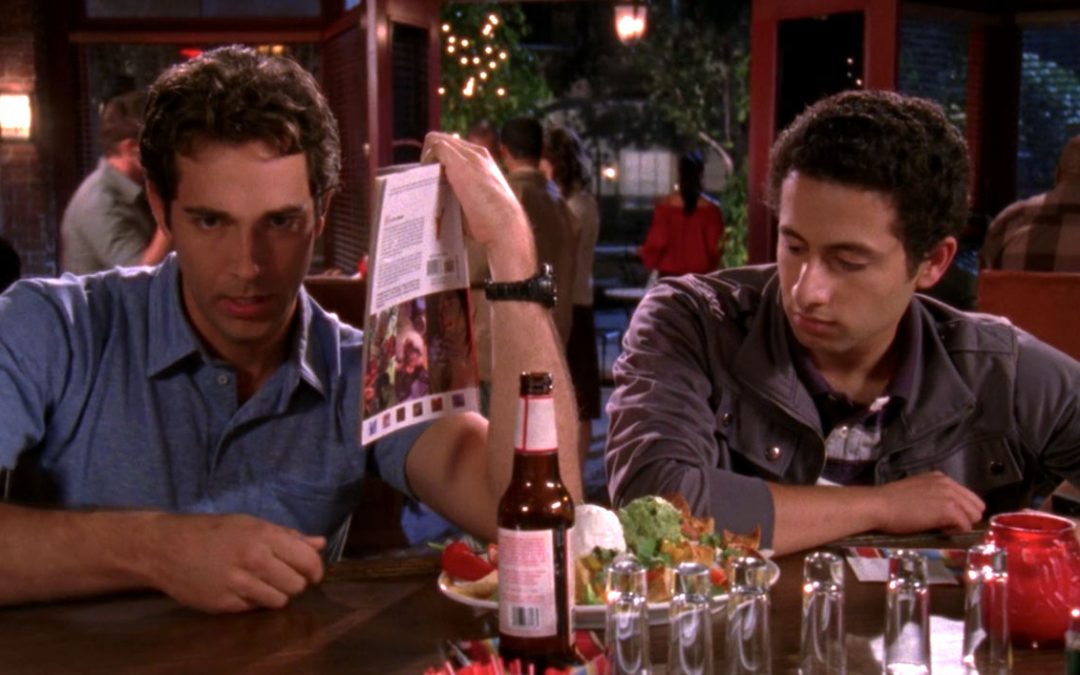 Chuck starts training Hannah between one yogurt break and another (most important meal of the day) but his real job is to become the handler of Manoosh, a Chuck-like nerd who’s working on a secret weapon for the Ring. Meanwhile, Morgan and Ellie become increasingly suspicious about Chuck and his job, which makes Devon extremely nervous about maintaining Chuck’s cover since lying isn’t exactly Devon’s forte.

Romantic Reversal. Sarah helps Chuck with his earpiece and remembers their first encounter fondly. Chuck, now seeing it from the other side, thinks he was pathetic. Just like Chuck in S1-2, Sarah is more attuned to her and Chuck’s feelings, while S3 Chuck is less so and does not understand Sarah’s reasons behind her statement that the fact she found him sweet and innocent made her initial job of developing him as a mark/asset much harder.

Spy Reversal. Manoosh is a representation of Chuck, a darker Chuck, a geek with an inferiority complex like Chuck but who, unlike Chuck, externalizes it selfishly and immorally. He and Chuck have a similar story, which Casey mockingly highlights while debriefing Chuck. Chuck is S1 Sarah the handler and Manoosh is his Chuck. And Chuck burns Manoosh (to keep him safe), just as Sarah almost burned Chuck (to keep him safe) at the end of 2.20.

This episode is a reversal of 1.01 Intersect; Chuck meets his new mark Manoosh at the Buy More, just as Sarah met her mark Chuck at the Buy More. Chuck’s first meeting with Manoosh does not go as planned, just as Sarah’s first meeting with Chuck didn’t go as planned. Chuck gives Manoosh his card and tells him to call him, just as Sarah left Chuck her card and expected his call. Chuck has dinner with Manoosh at a Mexican restaurant, just as Sarah had dinner with Chuck at a Mexican restaurant. Manoosh turns out to have Intersect glasses, just as Chuck turned out to be the Intersect. Manoosh ends up in a dangerous situation, just as Chuck ended up in a dangerous situation. Manoosh gets bunkered, just as Chuck was almost bunkered. There’s even a direct reference to the pilot episode in the “piece of cake” scenes with Chuck and Sarah. 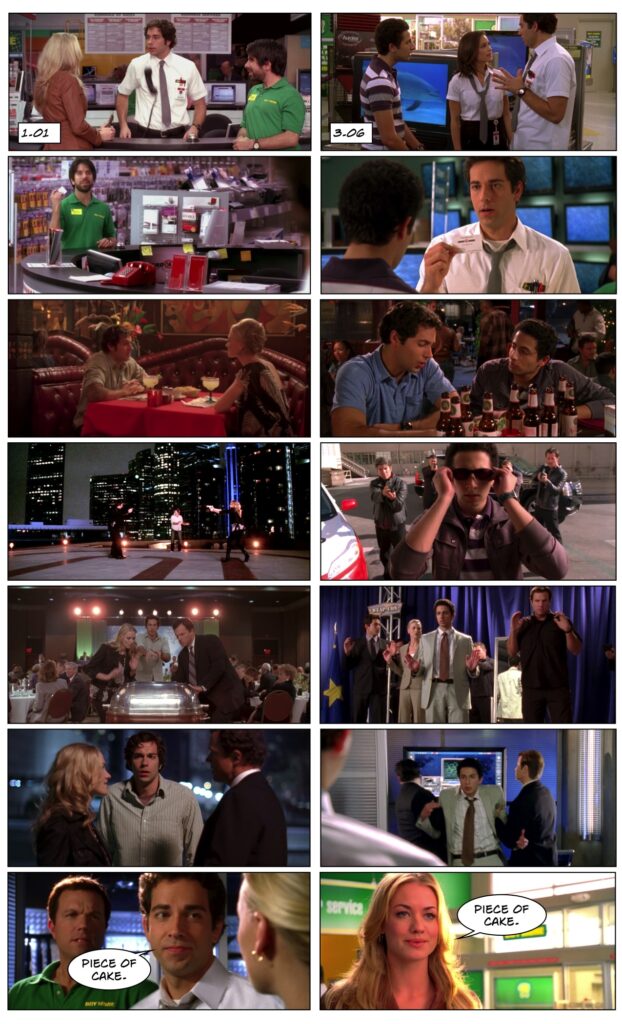 Chuck botches his first attempt as Manoosh’s handler, and Sarah’s concerns that he’s not ready and that they are advancing him too quickly seem justified, but Chuck’s second attempt is worlds better. Casey admits their boy is growing up and becoming a spy and is even able to burn an asset.

In watching Sarah and himself handle Manoosh, Chuck is painfully reminded of his past as her asset. 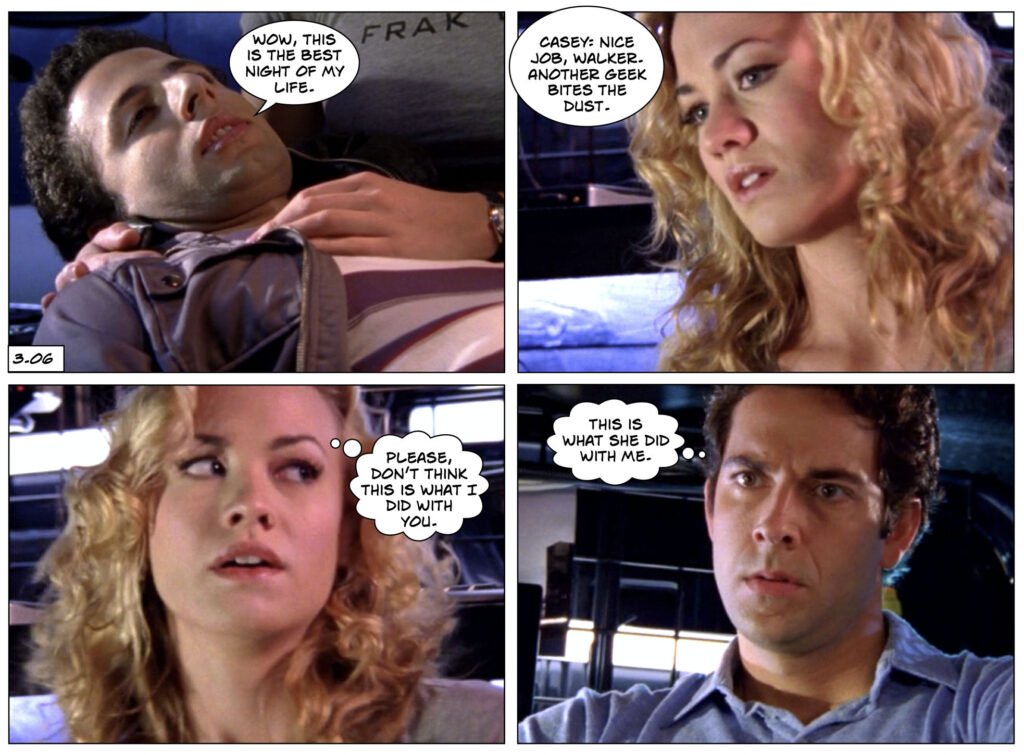 Love vs Duty. Chuck is growing more distant from Sarah; he does not show the usual (S1, S2, S3.01) jealousy during Sarah’s seduction mission with Manoosh. After burning Manoosh (duty), a hardened Chuck gets drunk alone. Sarah painfully observes the man she loves lose a bit of his innocence.

Feelings as a liability. Chuck experiences the other side of the handler/asset-mark relationship with Manoosh and is reminded how spies use their marks’ or assets’ feelings to manipulate them, a reminder that feelings are a liability in the spy world. As Sarah is getting progressively closer to her real self, Chuck is getting progressively farther from his. Sarah’s conflicting emotions about Chuck cause her to be off her game during most of the season. Feelings affect not only Chuck’s performance but Sarah’s as well.

Red Test. Just like in 3.04 with Sydney and in 3.05 with his choice of the nunchucks, Chuck refuses to use lethal force against a Ring agent during a stand-off in Dubai.

Hero’s Journey. Tests, allies, and enemies: Chuck develops an asset, has allies in Sarah and Casey, enemies in the members of the Ring, and his commitment is tested again by having to burn his asset, which in the hero’s journey represents the hero’s initiation into the special world.