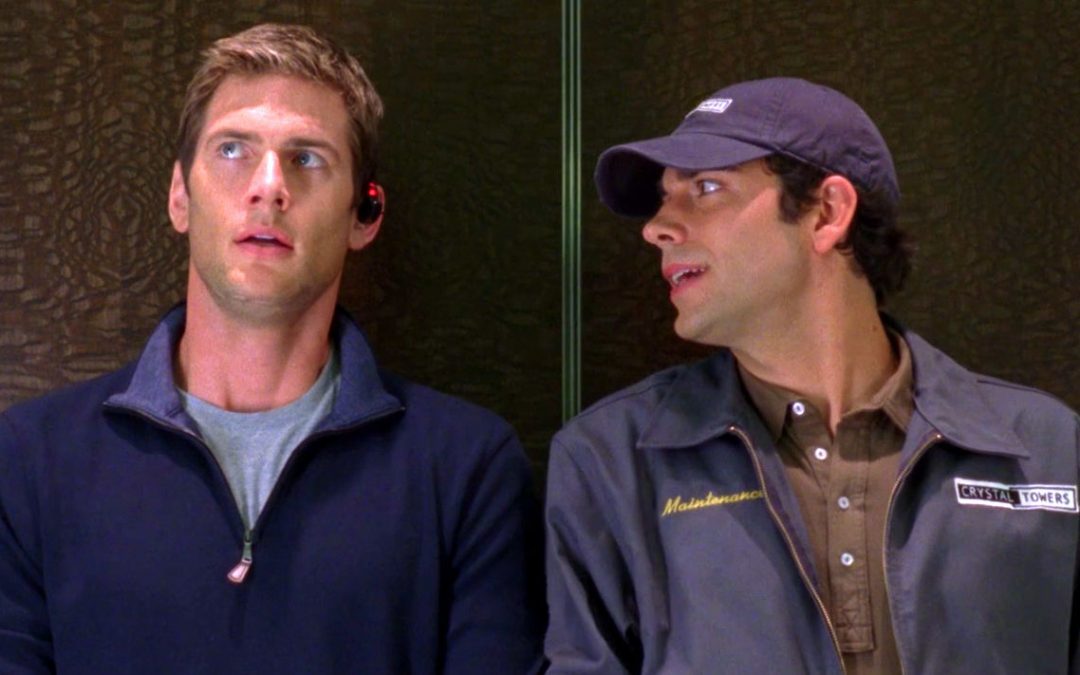 Casey: On this mission, Devon is you and you’re her. So, be her, Chuck, huh?

Chuck and Devon episode. Two men about spy town and a store full of fight club clowns. Ring agent Sydney thinks Devon is a spy and puts him to the test in order to possibly recruit him for the Ring. Chuck helps Devon complete the spy op assigned by Sidney and meets his soon-to-be new mentor Daniel Shaw, the CIA’s special agent Devon is supposed to kill as part of his mission. Shaw’s plan is to use Devon to get to Sidney and her local Ring cell but Chuck is against the idea and lures Sidney and her men to the Buy More, resulting in a showdown between Team Bartowski and the Sidney’s team. In the Buy More B story, Morgan is promoted to assistant manager and, just as Chuck must handle Devon, Morgan must handle Lester and shut down the Buy Morons’ fight club started by Lester after the latter was accidentally kicked by Chuck at the beginning of the episode.

Romantic Reversal. The scene where Sarah greets Chuck in the apartment at the end of the episode is a mirror and a reversal of the one at the end of 1.03 Tango. In both scenes, Sarah has her feelings written all over her face, but she can’t act on them. In Tango, it was because she was being a spy. Here it’s because Chuck is becoming a spy 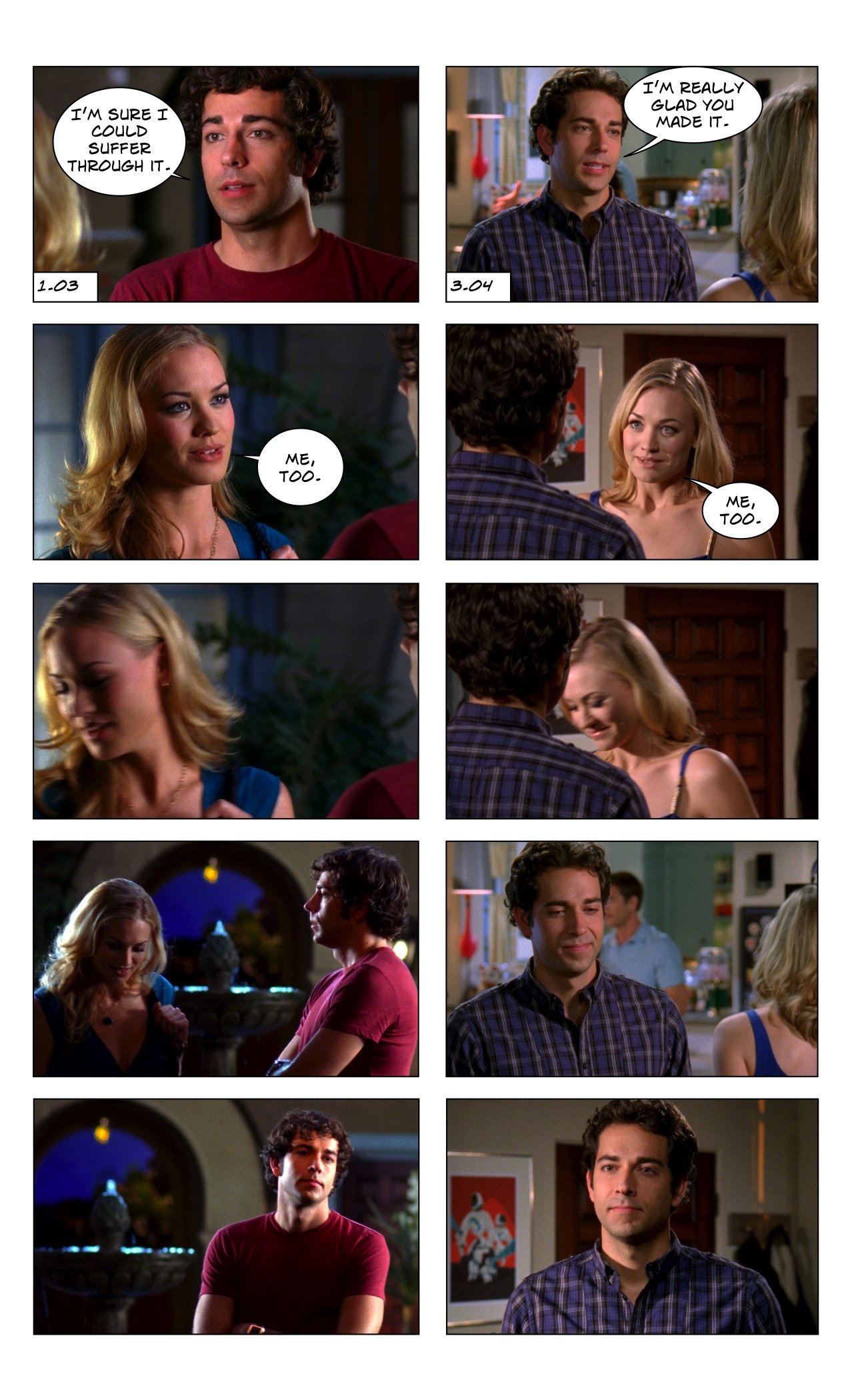 Spy Reversal. Devon (like Hannah and Manoosh) is a partial representation of S1 Chuck. At the beginning of the episode, Devon is tied to a chair, just as Chuck was when first mistaken for a spy in 1.03 Tango. Devon is being dangled off a roof by Sydney, just as Chuck was by Colt at the beginning of 2.01 First Date. As Chuck is about to get out of the van to help a hapless Devon in his mission (while Sarah stays in the van), Casey says, “Devon is you. You are her (pointing at Sarah). Be her.” Devon looks at Chuck’s spy skills with awe, just as S1 Chuck looked at Sarah’s spy skills with awe. Devon doesn’t want to lie to Ellie, just as Chuck did not like lying to Ellie in S1. Hilarious “I decapitated the bear” scene, in which Chuck shows himself a very accomplished liar. At the end of the episode, Chuck lies to Devon about Sydney’s fate to shield him from the harsh reality, just as Sarah lied to Chuck about Mauser’s fate at the end of 2.11 Santa Claus. Chuck is walking in Sarah’s shoes. 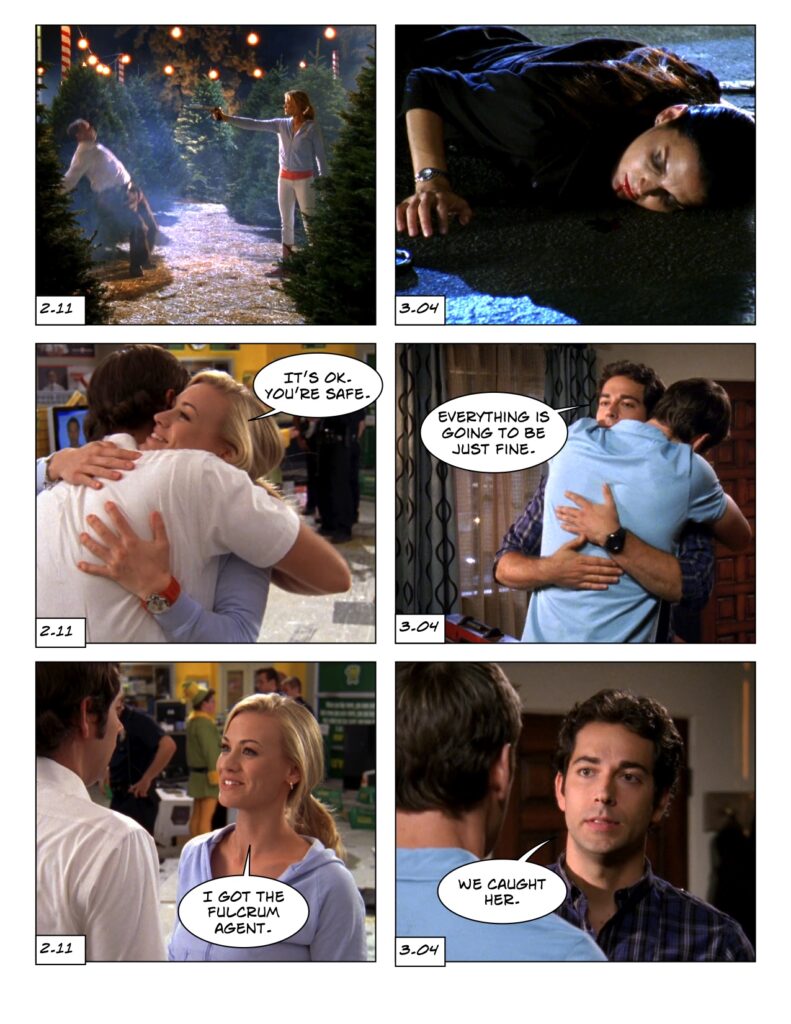 Love vs Duty. Despite the warm vibe at the end of the episode, Chuck is not looking directly at Sarah but at Devon, happy to have kept him safe. He’s moved on (duty). Sarah gives Chuck a hopeful look (love).

Feelings as a liability. Chuck stands up to Shaw about his feelings for his family and friends when Shaw says feelings are a liability and put everyone in even greater danger. Sarah agrees with Chuck.

Red Test. Devon thinks Chuck killed Julius and Chuck says it’s preposterous. Shaw orders Chuck to fake-kill him (and then resuscitate him) but Chuck fails this test, so Shaw has to shoot himself in the chest. Later, Chuck once again fails his red test (“don’t make me shoot you”) by failing to shoot a mocking Sydney (“I don’t think you can” and “spies don’t say ‘please’”) in order to stop her or defend himself but, prophetically, tells Shaw that nothing matters to him more than friends and family. And Sarah, also prophetically, tells Shaw that sometimes it helps to know one has something to lose.