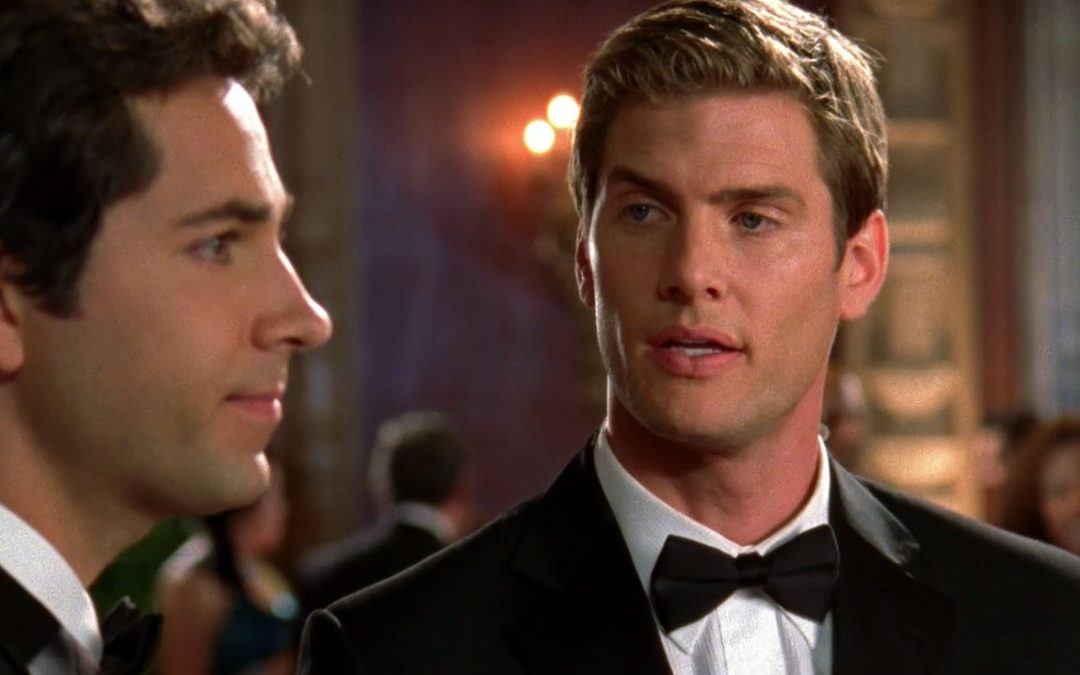 Devon: If having a double life means giving up half of your real life, that’s just not how I want to live.

Generalissimo Alejandro Goya, the dictator of Costa Gravas, is in the US to announce his country’s first open, democratic elections. He survives an assassination attempt by the Ring thanks to Devon, who gets invited with Ellie, Chuck, and Sarah to a gala a the Costa Gravan embassy. Things go south when Chuck and Sarah mistake a political protester for the killer and get Casey captured by Goya’s men in the process. The Ring killer manages to poison Goya, who requires Devon’s assistance again in order to survive. Devon enters the embassy with Chuck and Sarah as undercover doctor and nurse and save Casey’s and Goya’s lives.

At the generalissimo’s gala, talking to Devon and Ellie respectively, Chuck is resigned, Sarah is conflicted and can’t even lie to Ellie about her feelings for Chuck, just as Chuck chose not to say anything to Ellie in 1.03 Tango rather than lie to her.

At the end of the episode, Devon says to Chuck, “I’ve scratched my espionage itch. Don’t get me wrong. Black-tie dinners and embassy extractions are killer but It’s just not worth it. If having a double life means giving up half of your real life, that’s just not how I want to live.” This statement is the key to understanding Schwedak’s reason behind Hannah and Shaw (the two halves of a real life). Anything Devon and Ellie advise Chuck about relationships is gold but Chuck doesn’t get Devon’s point and Sarah doesn’t even hear it. They will both experience it.

Romantic Reversal. Just like Chuck in S1, Sarah experiences a tug of war between her head and heart, while, just like Sarah in S1, Chuck now tries to deny his feelings for her. At the gala, it’s Chuck the one who now assures Devon that his feelings for Sarah were never real, while Sarah can’t really hide her feelings while talking to Ellie. In a reversal from 1.01, when Chuck had trouble getting over his former girlfriend Jill while talking to Ellie, it’s now Sarah who has trouble getting over her former boyfriend Chuck while talking to Ellie. At the end of the episode, Sarah proposes to be friends with a handshake in a wait-and-see attitude after Chuck’s commitment to his spy life, just at the end of 1.11 Crown Vic, Chuck proposed to be friends with a handshake in a wait-and-see attitude after Sarah’s commitment to her spy life.

Chuck took the passive role during his 1.03 Tango dance with Malena. He now takes the active role in his dance with Sarah. As Sarah led the relationship dance in the first two seasons, Chuck will lead the dance this season. 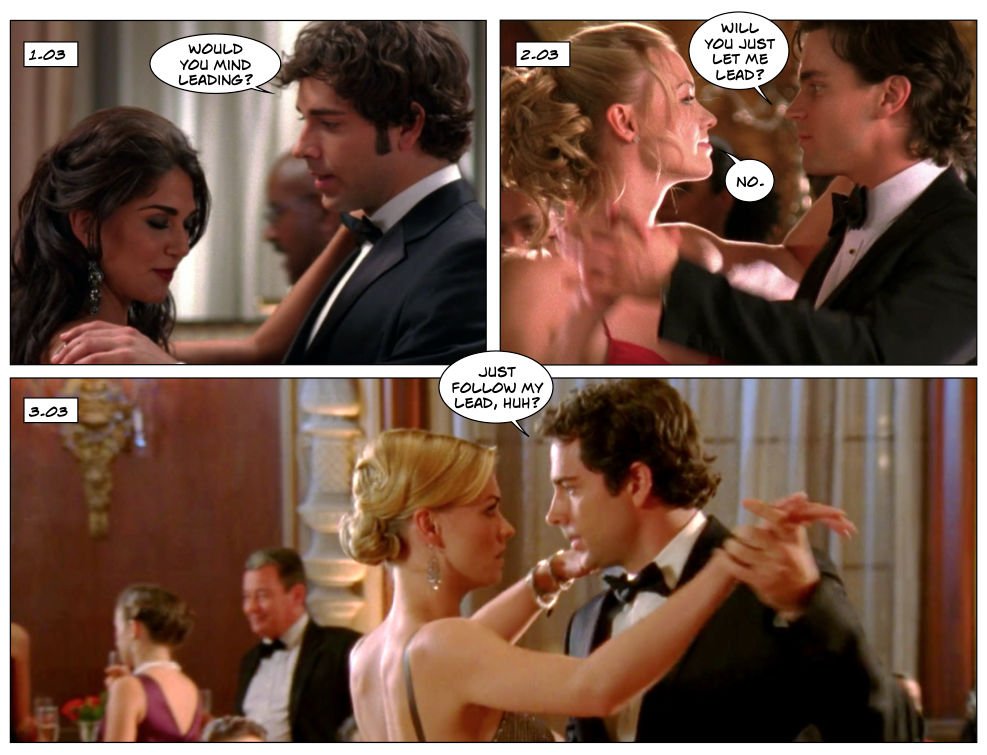 Spy Reversal. Chuck takes charge on getting invited to Goya’s gala, leads the dance with Sarah (reversal from Sarah’s 2.03 dance with Bryce), and comes up with the idea of using Devon to get into the Costa Gravan embassy. Chuck debriefs Devon as he was debriefed by Sarah and Casey in the first two seasons. In 1.03 Tango and 2.03 Break-Up, Chuck was caught by the bad guys and was saved by Sarah with Casey’s help. Here in 3.03, Casey is caught and Chuck saves him with Sarah’s help.

The scene where Chuck, Sarah and Devon go take care of Goya is a reversal of the one in 2.18 Broken Heart, where Chuck and Forrest go to the hospital to take care of Ahmad. Chuck plays Forrest’s role and is Devon’s handler while Devon is the doctor, just as Chuck played the doctor’s role while Forrest played the nurse’s role and was Chuck’s handler. This time, Chuck actively performs as a doctor.

Love vs Duty. “Friends” handshake. Both Chuck and Sarah choose duty over love—Chuck with dutiful resignation, Sarah with conflicted hope.

Feelings as a liability. Acting on Carina’s lesson with Karl, Chuck accepts that feelings are a liability and resigns to friendship with Sarah.

Red Test. Chuck convinces Sarah to use non-lethal methods to save Casey from the Costa Gravan embassy.

Hero’s Journey. Refusal of the call. Chuck is the willing hero who embraces the call to adventure but Devon, acting as the threshold guardian archetype, expresses the dangers and downsides of spies living only half of a real life.