3.01 Chuck Versus the Pink Slip

Chuck: There’s no way that we could reverse those roles, is there?

The Intersect 2.0 turns Chuck from asset to weapon. The government wants to turn him into the ultimate lethal weapon. Sarah can’t bear that and asks Chuck to run away with her. At first he accepts but his sense of duty leads him to change his mind in Prague. He’s himself unclear on his reasons and can’t articulate them to Sarah. They talk past each other, each saying what they feel (role reversal) but also think the other wants to hear (Sarah talks about a real life. Chuck talks about a life of adventure and a life that matters). Sarah is devastated and, when Chuck calls her, she throws her phone into a swimming pool to shut him out of her spy life. Chuck fails spy school in Prague and loses Sarah. She later tells Chuck that she acted impulsively in Prague, a mistake she will not make again, just as she did in 1.11 Crown Vic after the kiss in 1.09 Hard Salami. Morgan also fails his sushi chef training and comes back to Burbank. Emmett is assassinated by Ring agent Javier, an ominous introduction to the darker turn and theme of this season.

Romantic Reversal. In 1.08 Truth, Chuck asked Sarah if their thing under the undercover thing was (metaphorically) going anywhere and she, steeling herself against her feelings, said, “I’m sorry, no,” breaking his heart. He was looking for real and she chose the spy life. In Prague, Sarah asks Chuck if he’s going with her (quite literally anywhere) and he, steeling himself against his feelings, says, “I can’t. I’m sorry,” breaking her heart. She’s looking for real and he chooses the spy life. 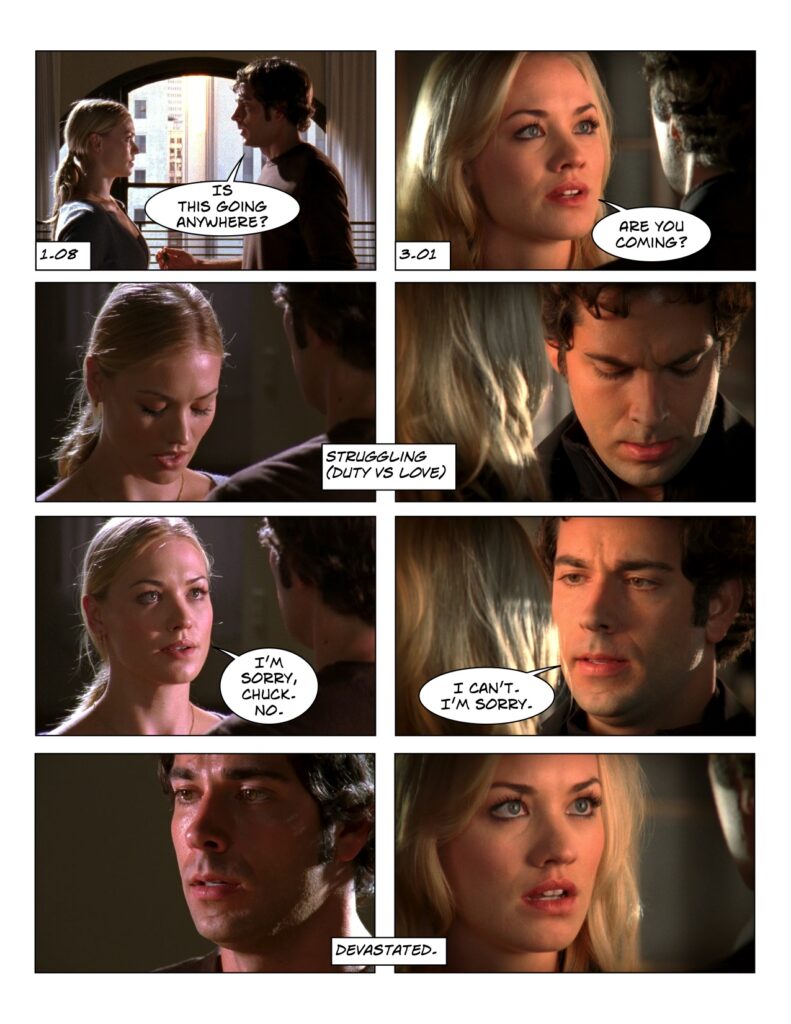 As Chuck seems to choose his new profession over being with her, making her feel as if she’s not enough, Sarah feels the same heartbreak she gave Chuck in the first two seasons, when (in S1) she first hid her very feelings for him and then (in S2) told him that she couldn’t be with him because it wasn’t professional (2.02 Seduction) and that she was leaving with Bryce (2.22 Ring), thus choosing her profession over being with him and making him feel as if he wasn’t enough. As Chuck assumed the passive role in their relationship during the first two seasons, Sarah assumes the passive role this season.

Spy Reversal. Chuck starts his spy training. And he has a long way to go; Casey calls him a lemon and Sarah does not consider him her equal in the spy world. But Chuck does protect Sarah from Javier at El Bucho and he later helps her escape from her Mexican cell. Even though Sarah’s very good at picking locks (1.08 Truth), she can’t pick the lock of her Mexican cell and needs to be saved by Chuck. This is a symbolic introduction to their spy role reversal for this season. Their very conversation symbolizes this reversal; when Sarah asks Chuck to help her break out of her cell1Both her literal cell and, unknowingly, the figurative cell of her pain., he asks her if there’s a way to reverse their roles (go back to S1-2) but she says he can do it. He can. And he will. (Chuck vs Braveheart) 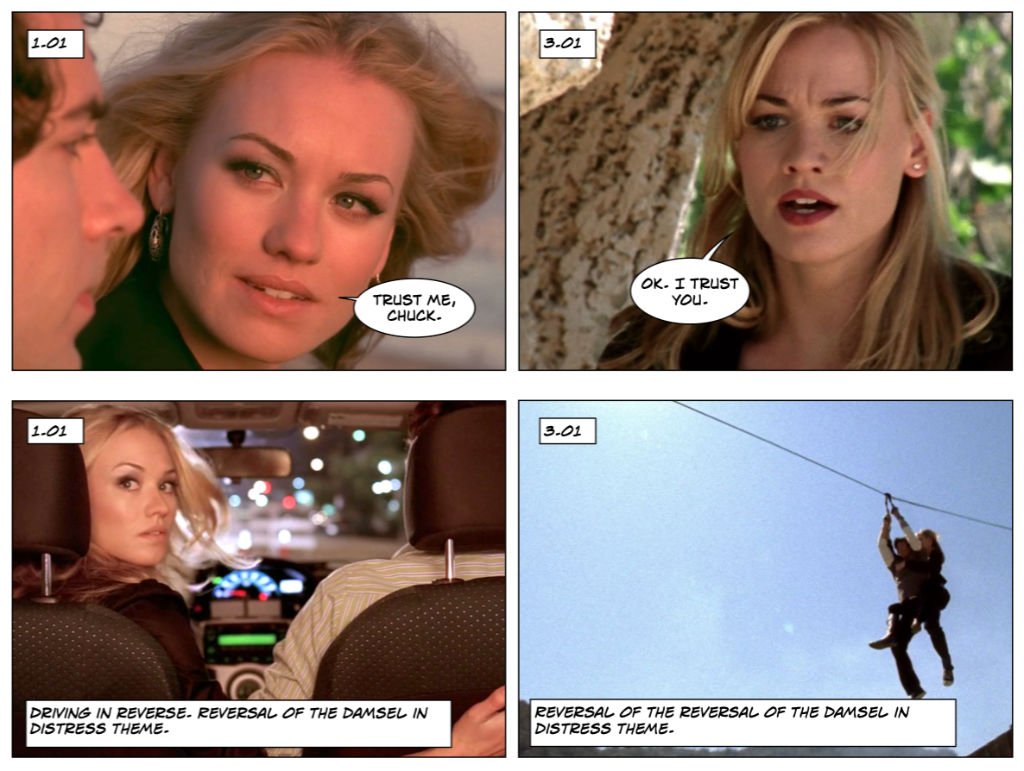 In a reversal from 1.01 Intersect, where Chuck passively listened to Mariachi guitar players during his dinner with Sarah as her mark, Chuck now actively poses as a Mariachi guitar player during Sarah’s dinner with her mark. Whereas in 1.01 Sarah danced seductively for Chuck and in order to protect him, she now dances seductively against Chuck and in order to provoke him. Whereas in 1.01 Sarah was aware of the threat on her mark’s life and hers and scanned the room with her eyes while Chuck was completely absorbed by Sarah, Sarah is now so completely absorbed by Chuck that she is not aware of the threat on her mark’s life and hers while Chuck is and scans the room with his eyes. Whereas in 1.01 Sarah saved Chuck from the active threat he couldn’t see, Chuck now saves her from the active threat she can’t see. 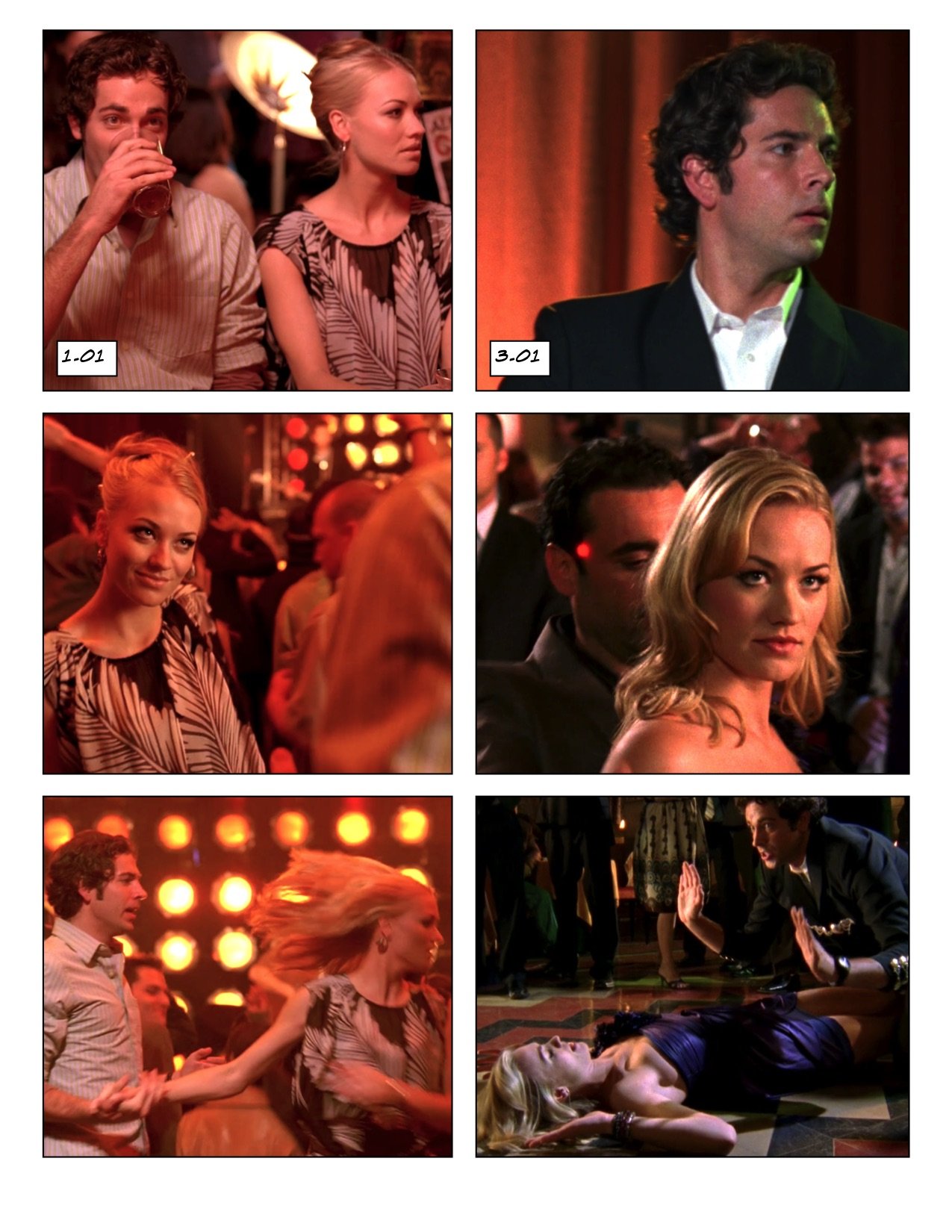 Love vs Duty. Chuck chooses duty over love because of love. Sarah thinks he chooses a shiny new toy (Intersect 2.0) over her.

Feelings as a liability. Hampered by his feelings, Chuck is fired by Beckman in Prague. His emotions prevent him from flashing in the Mexican cell until Sarah calms him down and expresses trust in him. At the end of the episode, Sarah tells Chuck he’s now a spy and must keep his feelings to himself. Feelings are seen as a liability.

Red Test. Chuck fails his fake red test by not “killing” Yuri under Beckman’s orders in the Prague simulation.

Hero’s Journey. Ordinary world. Chuck is introduced in his world after his failure in Prague, separated from Sarah and Casey and trying to reconnect with them. The hero loses the favor of his goddess and thus his powers falter in Prague.

3.01 Pink Slip is an episode-long hero’s journey in its own right: