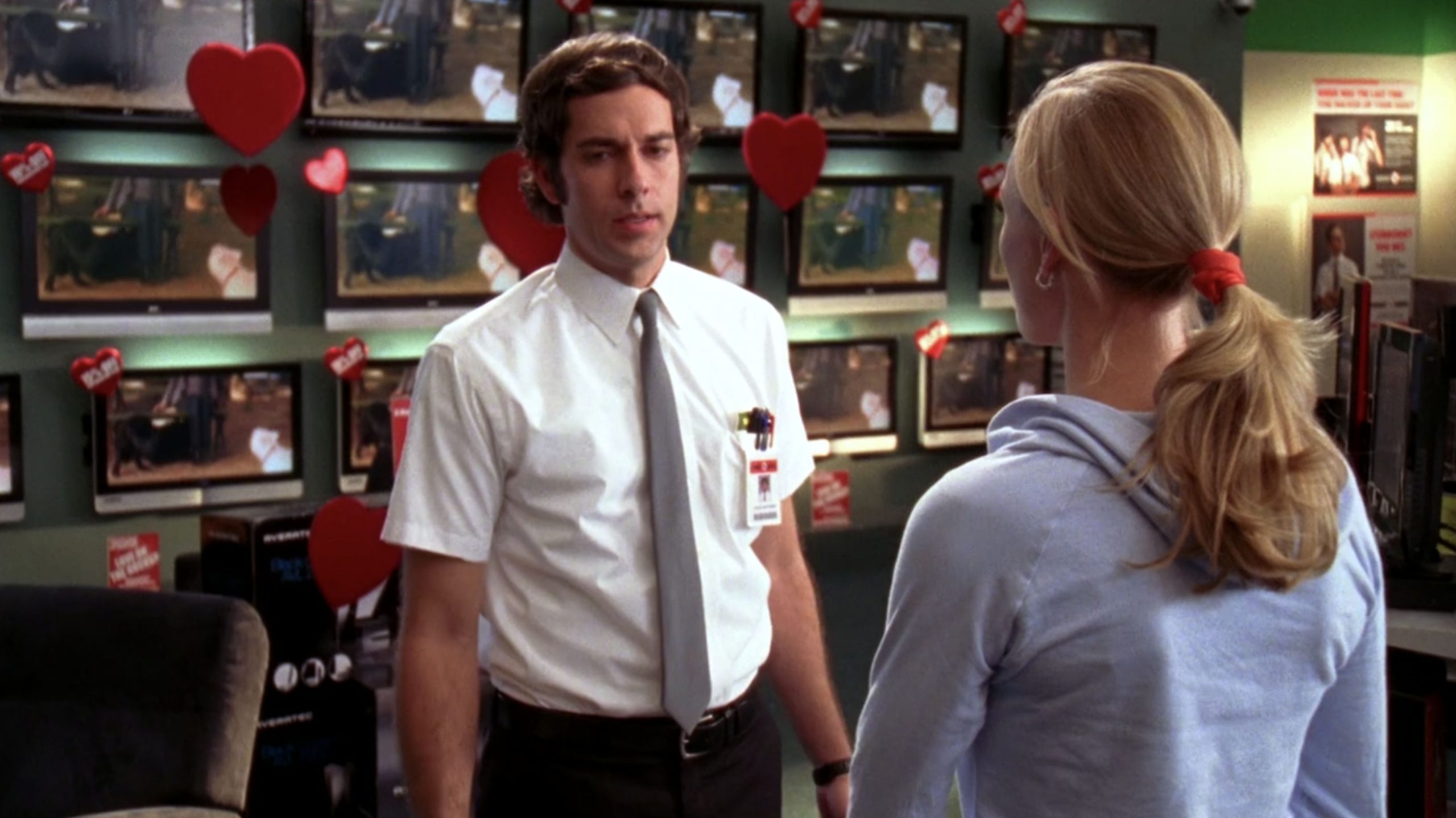 Why doesn’t Chuck look excited at the idea of a Valentine’s date with Sarah at the beginning of 2.13 Suburbs? Sarah seems to really want to go on a date with him but Chuck doesn’t seem to feel it. Season 2 makes it pretty obvious that both Chuck and Sarah are in love but that neither one has a clue how to make the relationship work or progress as long as Chuck is Sarah’s asset.

The difference between the two of them is that Sarah is content with the status quo. She’s just happy to be with and around Chuck, in whatever capacity; from her perspective, their relationship is real. Chuck, on the other hand, is always the one who wants more, who challenges her feelings and relationship imagination, as shown throughout the show and made clear in the 4.04 Coup d’Etat episode.

They way I understand 2.13 Suburbs—which should be watched after 2.14 Best Friend and before 2.15 Beefcake—Chuck is cool towards a Valentine’s date because it wouldn’t be a real date, while, Sarah is just happy to have an excuse to spend time with him. When they then go undercover as husband and wife and Sarah makes breakfast just for him, not because of their cover but because she wants to, that’s a glimpse of something real and Chuck loves it.

After their mission is over, Chuck wants to go back to the house to recapture that sense of real togetherness but now it’s Sarah who acts coolly because she senses that she allowed herself to be sucked into the dream-like experience of a married life with Chuck and let her emotional guard down (similarly to when she thought they were going to die at the end of 1.09 Hard Salami and kissed him), so (similarly to 1.11 Crown Vic) she snaps back to reality by acting cool and professional. Chuck is hurt and tells Ellie that the whole housesitting experience was a disaster for him and Sarah because the two of them will never be more than what they are now (handler/asset in love with no clue how to make things work).

This frustration leads Chuck to break up (again) with Sarah at the beginning of 2.15 Beefcake. He wants something normal, something real, and the spy life gets in the way. This is where Cole comes in; he symbolizes the best of the spy life (honor, courage, bravado, excitement, adventure, exotic places, glamour, heroism) and the two-episode arc with him represents The Last Temptation of Sarah, the decision between spy life and normal life, between James Bond and Chuck. When she rejects Cole at the end of 2.16 Lethal Weapon, that’s a big moment for her because she’s subconsciously rejecting the spy life for a normal life. Her rejection of Cole Barker is what brings Bartowski and Walker closer together (Barker = Bartowski and Walker). Chuck understands her choice and realizes something must change for their relationship to move forward so, at the end of 2.16 Lethal Weapon, he tells her that he’s made the decision to get the Intersect out of his head so that they can have a real relationship.

And this leads to the awesome Orion arc.

I think Chuck is cool to the valentines date due to the emotional ups and downs of the whole best friends episode. The “long after your gone comment” that hurt Sarah, then her emotion when she thought he was blown up opened his eyes to how she really felt, then him responding by saying “yeah you do” after her apology. But in the end when Morgan says “it doesn’t get any better than this”, Chuck realizes that, and that is why he is not excited and your right, Sarah is because she convinced herself that it is a good as it gets for her.