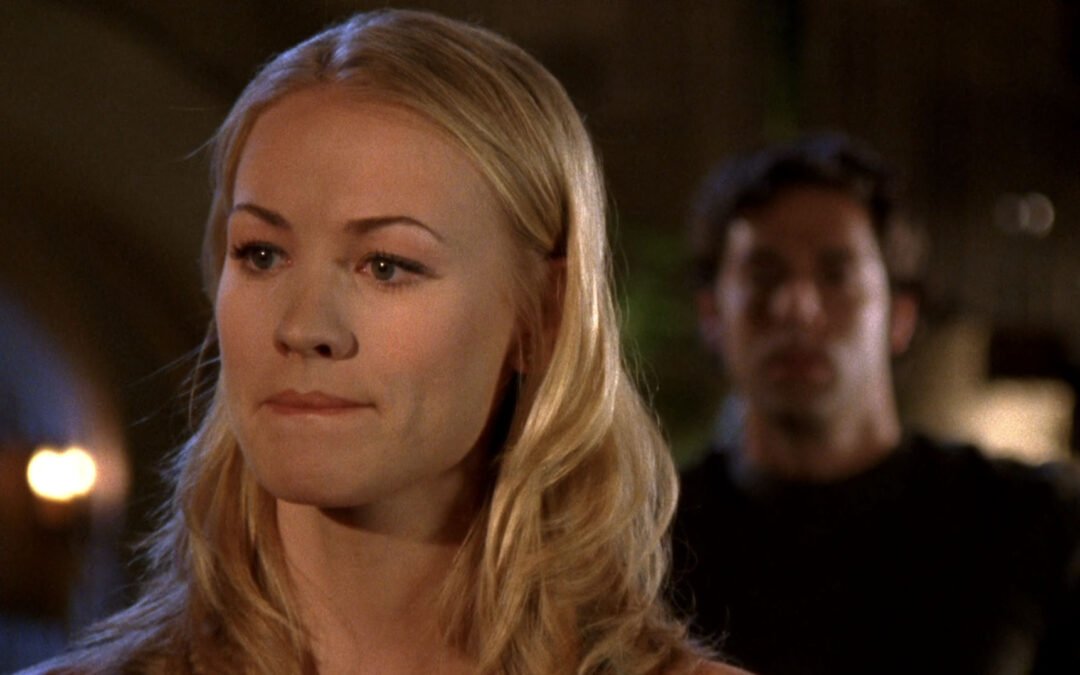 A fan asked this question, “After having watched the show a lot of times, I have only now realized that Chuck tells her all that stuff about them never being able to be together in maybe an attempt to save her life, because of what Bryce had told him, which makes a lot more sense. Before now, I had never understood why Chuck did that. But what are we supposed to understand that Sarah was going to say?”

She was probably going to tell him what she had just told Casey, that she hesitated (when Chuck was held at gunpoint by the Fulcrum lady) but could still protect him. She might have also, maybe, added that they needed to scale their relationship back a little so that she could better protect him. But Chuck goes far beyond that and for the heart of the matter—they will never be together because they are not on the same ontological plane of existence; he is a normal guy while she is a super spy. Sarah is shocked and in tears and only later in Devon and Ellie’s apartment realizes that Chuck broke up with her for her sake, in order to protect her physically, emotionally, and professionally. Because of that, she loves Chuck even more and will later do the same for him at the end of 3.02 Three Words, after he decides to join her ontological plane of existence by becoming a spy.

It’s significant that the lyrics of the background song Skinny Love that come to the foreground when Sarah gets up and cries after Chuck’s break-up words are a foreshadowing of their season-3 journey:

And after Devon’s prophetic words about Chuck and Sarah being next, when Sarah turns and looks at Chuck, we hear these lyrics:

♪Who will love you?
Who will fight?
And who will fall far behind?♪

Chuck will love Sarah and fight for her, and all other spies will fall far behind.

Do you think that they went overboard with the number of times they break up in season 2? I understand the rationale as you have laid out above but you would think that at some point Sarah would say enough. Does she actually understand why Chuck broke up with her in this instance? Does duty keep her in place because the love part takes a real beating at some points. The emotional rollercoaster of on again, off again during this season left me with the feeling of oh no not again when they break up just as Cole arrives. That said there were many poignant moments between Chuck and Sarah during this season. The other storyline that I just clued into is the fact that Sarah hooks up with Shaw before Chuck.

They break up twice in season 2, right? Once at the end of 2.03 Break-Up and once at the beginning of 2.15 Beefcake. The first break-up is very important for two reasons: it introduces the core ontological reason why they can’t be together (he is a normal guy while she is a superspy who quells revolutions with a fork) and the love-vs-duty reason (love is a liability for spies). These two objections will be resolved at the end of season 3a, when Chuck becomes a spy and gets together with Sarah.

The second break-up during the Cole arc also has two reasons: it pushes Chuck to man up and take control of his destiny and it proves that Sarah’s love for Chuck is as good as it gets.

I think both break-ups are necessary to move Chuck and Sarah’s relationship forward. Chuck needs to grow up and become Sarah’s equal (that’s half of the show).

Sarah does understand why Chuc breaks up for her once they walk into Devon and Ellie’s place. When Sarah turns around to look at Chuck, she understands that he broke up with her to protect her personally and professionally. He “shot straight” because she couldn’t, and that affected her performance as a spy and put her life in danger. That makes her love him even more, even if they have to scale back their relationship.

And at the end of the Cole arc, she also understands at the very end of the 2.16 Lethal Weapon episode what’s going on. At the beginning of 2.15 Beefcake, what Chuck wanted was to break up with her because he’s weak. Cole teaches Chuck to act like a man, and by the end of 2.16 Lethal Weapon, what Chuck wants is mentioned by him to Sarah in his fountain speech (and is all thanks to Cole), and once Chuck finishes his speech and leaves, you can see that Sarah has a look of dawning realization.

So, yes, both break-ups are needed, both are good, and both times Sarah understands the reasons. The first one just takes two seasons to get resolved.

As always, I appreciate your insight. I have come to realize that I need to focus on Sarah’s facial expressions in many of these critical scenes. Much is said in her non verbal cues and expressions. I have developed great respect for Yvonne’s talent as an actress. The amazing thing is that she was this good at the beginning of her great career!