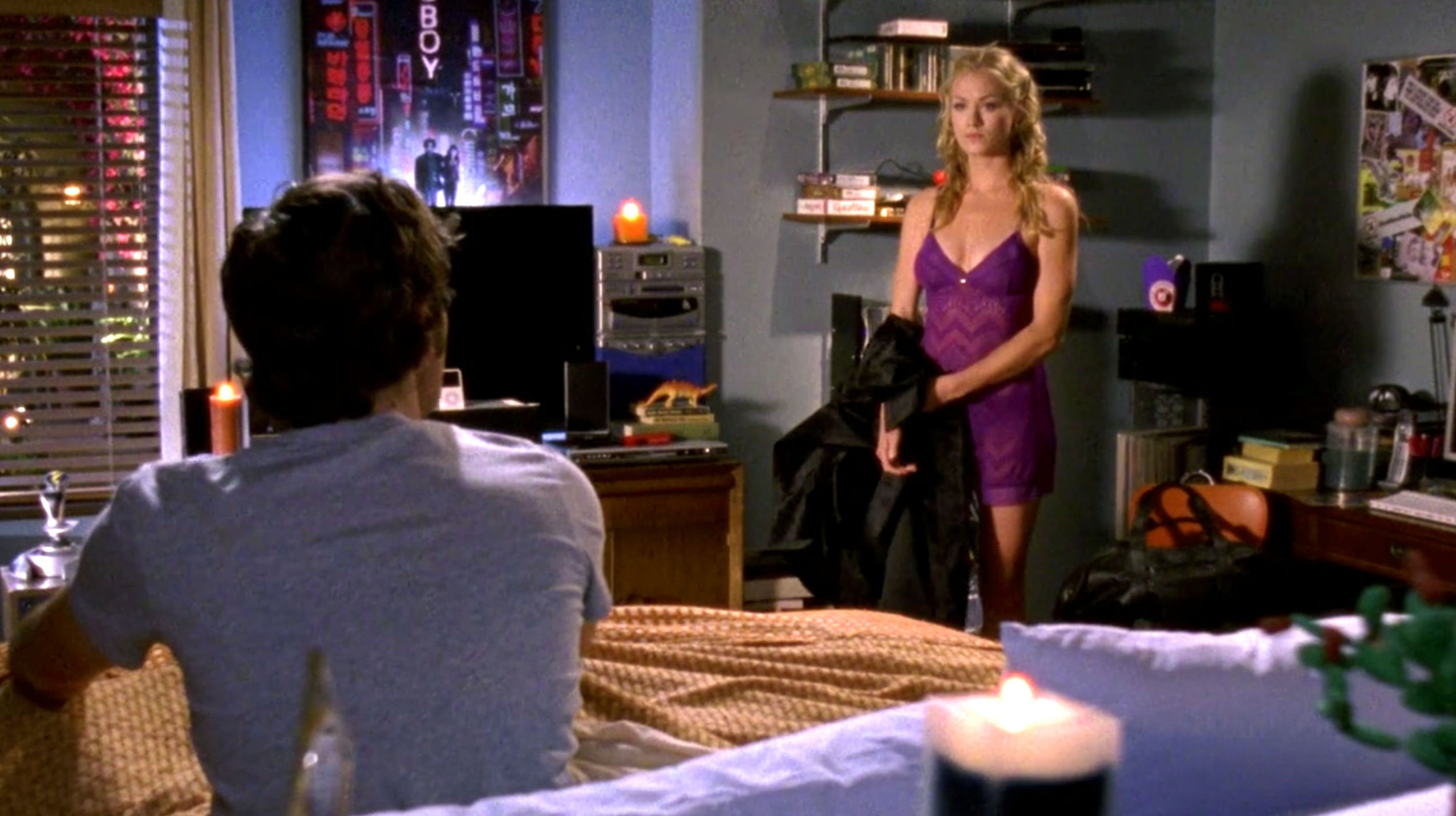 The scene in 1.08 Truth, the one in which Chuck and Sarah have a mission to make Devon and Ellie think they are intimate, is genius. With all its layers of meaning, the double entendre, and the visual symbolism, it’s the scene that made me realize I was watching a truly special show. I love the unintended double meaning of their statements.

Sarah’s ”This is my cover!” is supposedly to fool Devon and Ellie but it’s also the excuse she uses to visually seduce Chuck under the cover of the mission. And her emotional cover is as thin (for us viewers) as her physical lingerie cover.

Chuck’s ”Well, it doesn’t cover a thing” has an obvious primary meaning but also shows that both Chuck and Sarah are symbolically exposed in that scene—Sarah because of what she’s wearing and Chuck because he feels exposed in his bedroom. They are both facing the truth about themselves but they are lying to themselves and each other about it. And again, the emotional cover is as thin as the physical one.

And Sarah obviously doesn’t need to wear sexy lingerie to fool Devon and Ellie. She’s doing it because that’s the most she can offer Chuck in terms of intimacy under the circumstances, and she’s hoping that his seeing her “naked” will be enough to ward off his interest in Lou.

But Chuck misinterprets her offer and thinks she’s just toying with his feelings for her.

By now, they are both living a double lie; they are already in love with each other but must pretend to pretend to be in love because the only way they can be together is through their cover, even though the cover is the very thing that prevents them from being really together. A paradox that will only be resolved in 3.13 Other Guy.

In this mission, they both have multiple contrasting goals, and it’s no wonder that they both fail at getting what they want and hurt each other’s feelings in the process.

Sarah wants to convince Devon and Ellie that she is in love and intimate with Chuck, convince the CIA that she is not in love with her asset, flirt with Chuck, maintain plausible deniability about flirting with Chuck, and keep Chuck away from Lou.

Chuck wants to seduce Sarah, maintain plausible deniability about seducing her, find out whether she is in love with him, and decide between the dream of Sarah and the reality of Lou.

No wonder the attempt ends with a heated argument. Notice how Sarah covers herself when Chuck mentions the world’s oldest profession. She was making herself visually available to him but is now hurt and hides herself from him. And they both end under the cover of the blanket, as a symbol of their hiding their true self from each other (and themselves). Notice the blue (cool) ambient light in the scene as a symbol of their mood.

Contrast that with the bedroom scene at the end of 3.14 Honeymooners. Notice the absence of covers and the warm ambient light. Notice Sarah’s wearing Chuck’s boxers (true intimacy). They are now true to themselves and to each other. No more covers.

You really didn’t have an episode for me to put this in but one of my favorite Sarah jealousy moment is often missed for other more overt behaviors and kiss in episode 1×09 because it’s subtle. Sarah is so consumed with jealousy in the van, she makes an excuse to break in on the date. What occurs next is what I chuckle at. When she enters the club, Chuck spots her and they go to each other. Where do they end up? They end up on the dance floor. The actions here are the fun part for me. What does Sarah do when she greets Chuck? She, close to him, places her hand on his shoulder and her head to his side (wrong side but the side). The hand on the shoulder is the woman’s hand position for slow dancing. Sarah wants to “dance” with Chuck. Also notice that her concern for Chuck doesn’t prevent her from making sure Lou gets a good look at this and doesn’t break that intimate position until Lou is leaving. Sarah is so concerned about Chuck’s welfare, she can’t take her attention from….Lou. She’s barely paying attention to Chuck’s responses.

Also, notice what she’s wearing. She’s on a surveillance mission so she’s going to be in the van. Casey’s got on street clothes and a light jacket. Lou comes in wearing a jacket. People outside of the club are either dressed in cool whether clothes or the women in dresses have their arms folded across their front like they’re trying to keep warm. Sarah is in a low cut tank top. This isn’t her usual surveillance attire and certainly not appropriate for a cool evening. Sure, women often stand in the cold without a jacket to avoid dealing with it in the club.. I’ve known plenty who would stand in a snowstorm and a short dress without a jacket. Sarah was in the van.

When Sarah and Casey pull up to Chuck outside the club after Lou’s exit, Sarah can’t wait to tell Chuck they got the information. She’s thrilled to tell Chuck. In reality, she’s thrilled that she caused the date to go south. When Casey asks about the date, she turns her head forward and feins indifference but she grunts when she can’t maintain indifference as Chuck mentions his faded hope he would get laid.

I love that scene, particularly the smug smile on Sarah’s face in the van when she says, “mission accomplished” in all its double-meaning glory.

She’s completely lost control but I’m not even sure how much she’s aware of and “everything” she’s doing. The green eyed monster of jealousy is in control. It’s the type of thing when it happens in real life, we call that person “nuts”. She’s nuts here. It’s no wonder she ends up kissing him the next day… she’s ready to explode inside. It’s cute as long as you aren’t Chuck.

Especially in 1.11 Crown Vic. Not the sweetest Sarah in that episode.